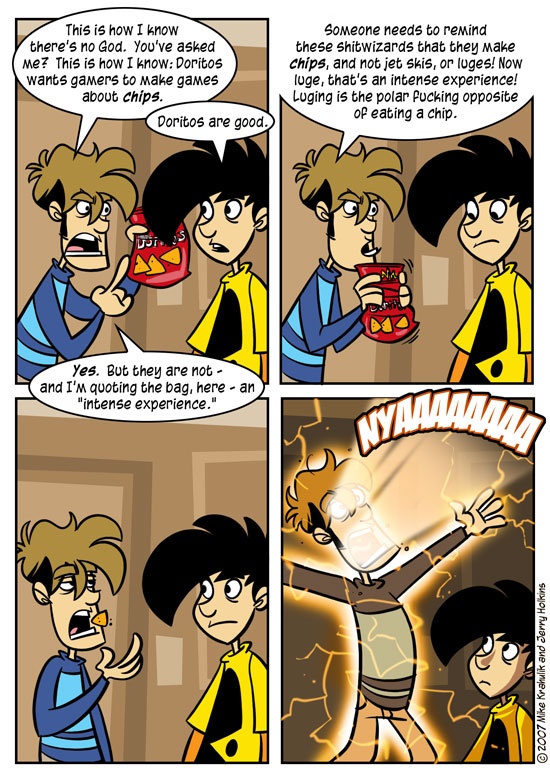 The Goddamned Dorito people are now exhorting gamers to create game ideas based on chips, which I took as a powerful theological argument.  They suggest that gamers may find inspiration in their "iconic shape," by which I assume they mean "a triangle."  These "Chip Lords" can't even be bothered to make their own commercials anymore. They have heard about the YouTube MySpaces, and they want to get an oily tendril around participation culture.

Somehow we ended up with a bag of X-13D superchips, some kind of mystery flavor, and if you want to know what the taste like imagine that a hamburger patty has fallen onto a cat, condiment side down. Believe me, it's worth buying a bag to verify this assertion. I went to their site to try and figure out what was going on, or if I should call Poison Control, or what, and it took me to some terrifying snack chip dystopia. I ended up working these weird gears and twisting valves so cheese could get through, it was like the Nacho version of Myst.

I don't need a lot of information about your fucking chips. A slogan like this would suffice:

This would also do:

You know what? Let's dial it back further:

That should be the sum total of our interaction.

NetDevil announced Jumpgate Evolution at a recent press... thingie, along with a fairly loose video spot for their upcoming Lego Universe MMO. I'm still obsessed with Legos, or Lego, I'm never sure exactly which one it is but I have faith that someone will come forward soon to chastise me. I was looking at photographs from my trip to Germany yesterday, and while it is a very old and historical country almost eighty percent of my photographs are of Legoland Deutschland. And then, almost eighty percent of those are of me terrorizing the Lego version of various European cities. In any case, I could stand to know a lot more about what they're planning. The video only aroused my hunger.

The sequel to Jumpgate, too, I would know more of. There is no reason you should remember this, but the Jumpgate community itself approached us about advertising the game a few years ago, independently of the developer.  That sort of thing doesn't happen.  It made me take note.

There's finally a picture of the Rock Band drum set, which I think an actual drummer might call "a picture of the drum kit." I'm sure you've already read the synopsis of the Game Informer article all this stuff is coming from, but if you haven't, these are shocking materials.

This is really the difference between buying a franchise, as Activision did with Guitar Hero, and purchasing a creative engine like Harmonix. Oh, you aren't singing on this section? Tap your microphone and it becomes a tambourine, utilizing faerie energy. By contrast, Guitar Hero III will allow you to do a lip trick off a giant human skull into a burning vagina. These are two very different approaches to the rhythm genre, and it will be interesting to see which one the market rewards. 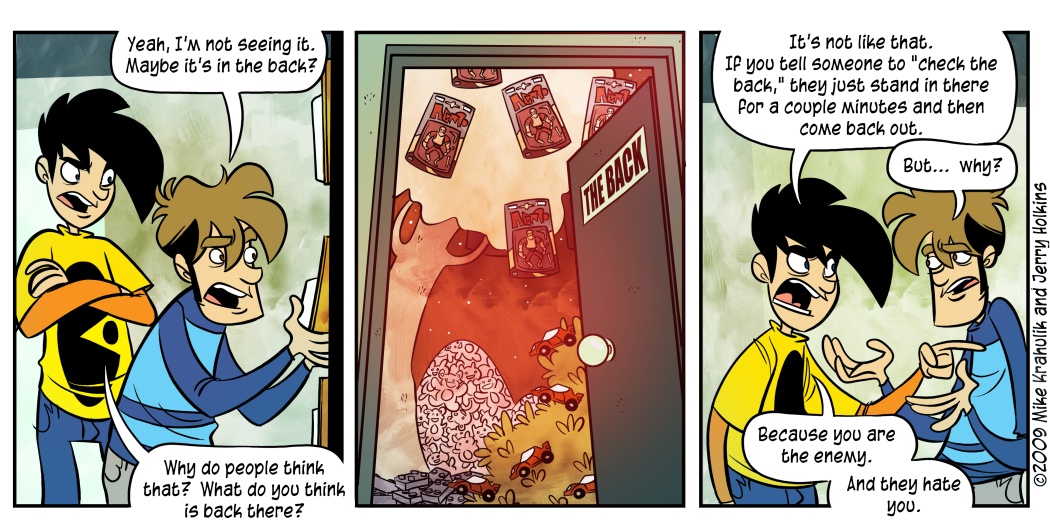