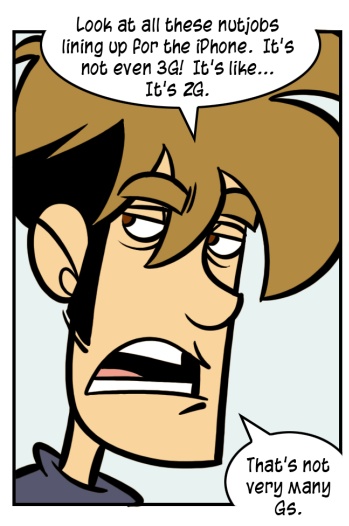 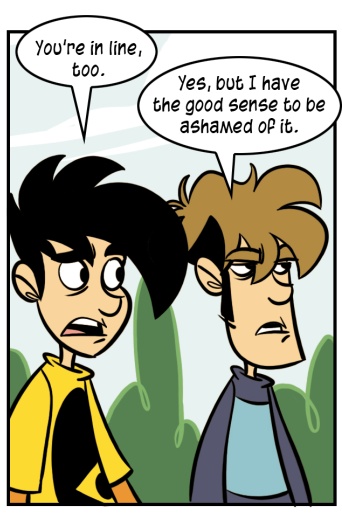 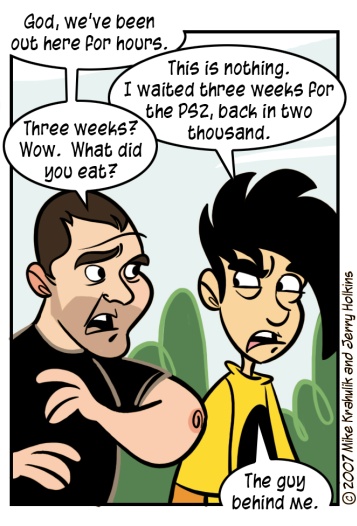 If you would like to know if the iPhone is great, well, it is great. Worth waiting in line? There's no question. Yes, once you realize that iTunes simply doesn't work correctly on 64-bit Vista, and once you agree to eject yourself from your negotiated Business Plan and pay twenty times more, you will be able to see a map that displays nearby sushi.

Having serviced Macs at one point in my illustrious IT career, I understand that there is simply an Apple Way of doing things, and it is often a very, very good way but it's still their way as opposed to some natural ratio of the universe. It's not universal, and there are strange blind spots, but there is a reason that their chosen people hoist the banner. My old phone, one based on Windows Mobile 5.0, had almost every feature the iPhone has - point by point. The differences between the products (like the differences between their desktop cousins) have to do with how functionality is exposed to the user. In this matter, you'll find that Apple's product is almost infuriatingly superior.

I have been waiting for the ability to manipulate technology by pressing dynamic symbols for basically ever. If you find such things unpleasant, then I suggest you develop a taste for forced labor because by the year twenty-twenty all that sneer is going to get you is a slot in the underclass boiling corpses. Get with the fucking program. Come and touch the neon glyphs.

Whenever I can eschew the stylus in a touch environment I do so, and as a result I took to the keyboard pretty quickly. But rather than being a tool that expects occasional misspellings, it's philosophy seems to be based on the fact that typing quickly with your thumbs is simply an inexact process. If you're used to thumbboards, you'll start out pretty good with this one - but being great with it involves accepting that you are going to spell things incorrectly, and trusting the system's startling, almost psychic guesses when you mangle some innocent word.

If you were driven back from the phone by its lack of 3G, this is something I can understand - since I've never had it, it's not something I miss. When a 3G version of the phone hits, you will know immediately, because you will look around and it will be the future. Yes, the screen gets dirty, like your PSP and your Playstation 3. The experience is very similar. You can either dedicate your life to buffing these surfaces or you can live a live of dignity. I leave this up to you.

The guy in the last panel is actually a man named Wil Shipley, who won our Child's Play auction to be in the strip. We understand that he is a "big deal" in the Apple development community, which I imagine is like being the best singer in your junior high. I can understand why he would be so well loved, though: his application Delicious Library is a revelation, allowing you to catalog your games, music, and books (!!!) by scanning the barcode in realtime via your Mac's built-in camera. It's powerful and elegant, the whole thing is very Macintosh, and knowing that your collection is arranged somewhere might dull the bright jolts generated by obsessive-compulsive disorder.

We spent our time in line with him and his company, and it was good company either way you choose to interpret the phrase. We actually did another version of the strip for him because we thought he would like it, and you might like it as well. He suggested that (for the true Apple devotee) the real honor would be in providing the service as opposed to receiving it, information I could surely live without.

sister's sighing in her sleep 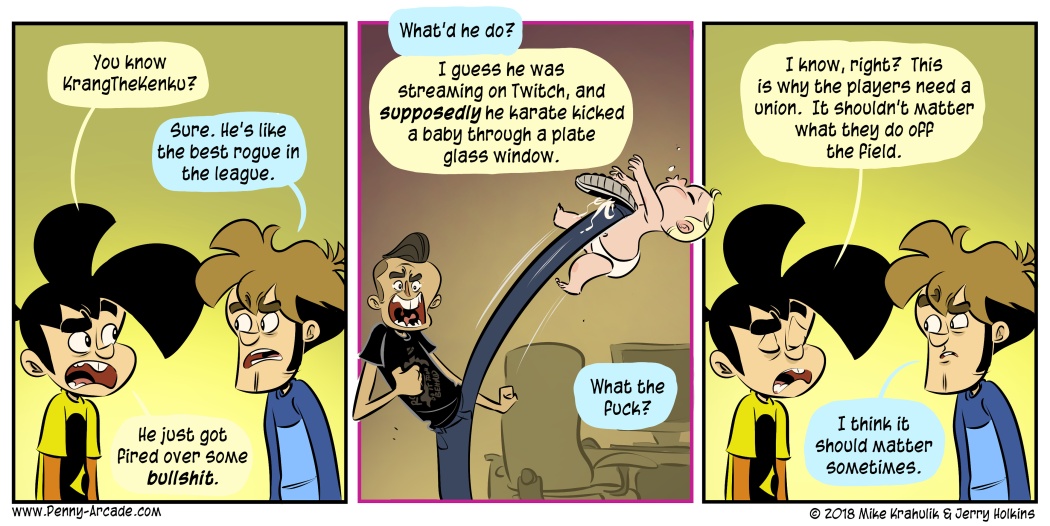