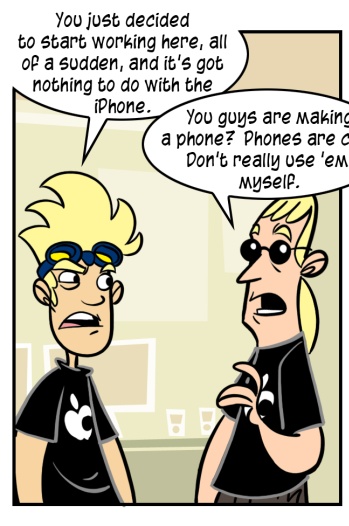 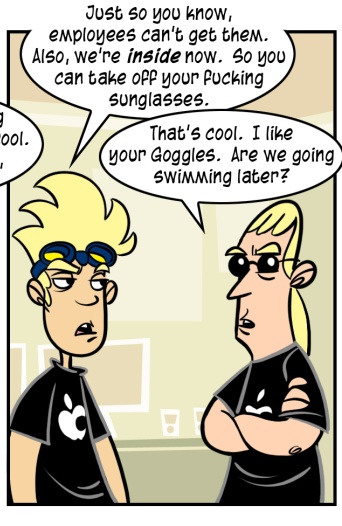 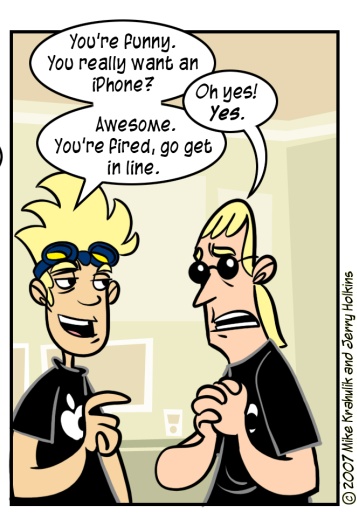 Brent's story is that he quit Apple to secure a place in line, but as is so often the case in workplace disputes management tells a different story.

I'll be heading down to the Apple Store tomorrow morning to take the temperature of the line. I don't think I can invest a whole day in it, but if I can get one of these Goddamned things I'm going to try. I switched from the Sidekick to an HTC Wizard to get away from a closed platform before - I craved the Sidekick's ample selection of Urban ringtones, but I could always sense the wrought-iron lattice of its limitations cinching in around me.  I'm not unhappy with Windows Mobile, and I've appreciated the ability to install third party applications - at least in the abstract.  I just think I'm ready to use a device where each application was designed by people who seem to talk to one another on occasion.  I sometimes get the impression using this phone that every program on it was designed by a different alien culture, each in conflict with the other, each clinging to radically different values and ideas about what it means to be civilized.

- Carcassonne just hit Live, and like Catan it's a fantastic translation of a tabletop classic. Optimally, I think these two games could have been released in reverse order, as Carcassonne might have done a better job preparing people for Catan than the other way around. Imagine that you are reaching into a Scrabble bag, only instead of letters you are pulling out chunks of the French countryside and assembling them into a map with other players.  If strategic landscaping appeals to you, grab the demo and make use of the excellent tutorials.

Carcassonne has a few advantages over Catan from a play perspective, especially if you've got friends over.  People sometimes complain that you can't play Catan competitively on the same box, even though this is stupid and impossible, like playing poker with all your fars face up on the table.  Secrecy is an important mechanic in the game.  Carcassonne doesn't work this way, which is lucky - it's the rare arcade title that plays four right on the box.  A game of Carcassonne can go quick, too, because instead of playing to a set score you just play until there's no more tiles.  The worst parts of the game are manually scoring it and finding people to play with, so having it in an electronic version that ejects all the drudgery really giftwraps the whole experience.

- Super Stardust HD (on the PS3, now) is also fucking fantastic. It's really weird: in aggregate, there's no question that I've spent more time with the downloadable offerings on the next-gen systems than I have with any of the far more elaborate retail content. Does this mirror your own experience? In any case, Super Stardust HD is a great argument for it.  I never played the original to compare it, but imagine the arcade classic Asteroids sitting on a juicy porterhouse, served on a platter where butter spits and fries. It's blasting plus beef, manic action and satisfying play. Don't miss the co-op mode.

- There are many theories percolating sur le web regarding the availability of the newest Rainbow Six map pack on Live Marketplace. And when I say availability, well, that's just it: it was made available for a few hours and then yanked unceremoniously. Were long canes involved? Joystiq broadcasts a few of the most common ones, like showstopping bugs or it being released by mistake.  Here's what I think:  The PS3 version of Rainbow Six comes with both map packs pre-loaded, extra content that currently costs Xbox 360 owners an additional twenty dollars. In the future, when such releases are synchronized, this sort of thing won't happen - but the precedent can't be allowed to stand.  Gamers are already sensitive about the pricing on these things, and the idea that owners of a competing system not only play for free but also get the content for free is almost overwhelming in its rhetorical power.

- A new shirt has been made available in the store. I think it was originally supposed to launch with the others, but we are at the mercy of an imperfect universe:

- This article at Wired, about a man I've never heard of, is the most fascinating thing I've read in months.