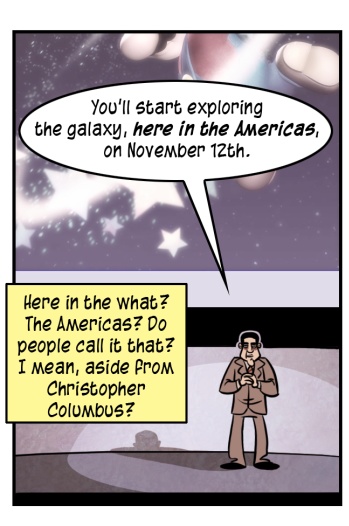 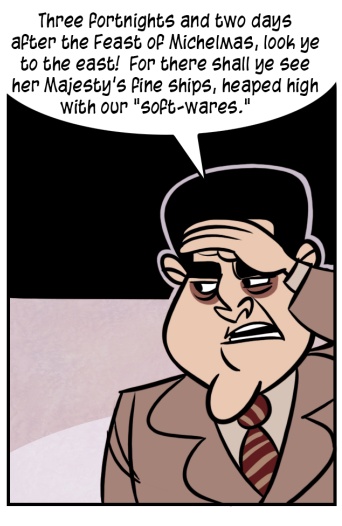 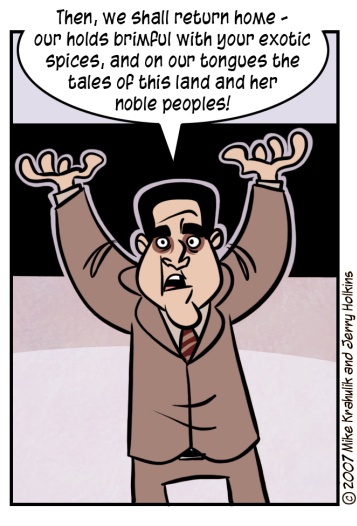 Poring over Reggie's announcement on Super Mario Galaxies, one of the words he used stuck out. I suppose he couldn't list off every country on the landmass, but any classification so wide that it could usefully describe both Nova Scotia and Chile seems problematic.

The developer walkthrough for the game is something I consider must see. Gabriel is tentatively anti-bee, but are bees better - quantitatively speaking - than raccoons? Than frogs? These mysteries run deep. But he's over at his desk singing Madonna's hit Vogue, which negates his opinion on this and other matters. It may negate him as a human being.

Raw game media by itself is entertainment, as we have discussed, but if I have another datapoint - like a favored developer, or (optimally) personal playtime, the materials become more useful. From my forkéd tower, I have heard the hardcore wonder and worry if the new Mario game will be too simplistic, and will not provide the challenge they crave. You can certainly dial back the challenge by having a friend help you, as they do at the beginning of this video - grabbing an extra remote to stun opponents with tiny stars or seizing environmental hazards. Let me say from my own experience - now decrepit, but perhaps fresher than your own - that playing a fully 3d platformer, where gravity is often relative plus interacting constantly with the Wiimote pointer simultaneously is a type of challenge you haven't yet experienced. Doing both things at once was like conducting a symphony while also writing a memoir. I felt parts of my brain open, creak open like an ancient chest. And within? Treasure.

You may anticipate Super Mario Galaxies with full joy and without fear, free of the doubts and tiresome ambiguities which so often plague the conscious mind.

We've greedily lapped up all interview content for Call of Duty 4, suffix Modern Warfare, and now await the upcoming demo with something akin to mania. In these taped discussions, people from Infinity Ward never talk about Call of Duty 3 as though it is the most recent game in the franchise - they talk about Call of Duty 2, the last one they worked on themselves. In fact, over the course of three very long interviews I've never heard CoD3 mentioned once. From the content, it's abundantly clear that CoD2 was merely a next-gen calisthenic for the company. Call of Duty was the first game I ever played with my real name, as the authenticity of the simulation seemed to argue against artifice. I don't feel like they've let me down yet, and I have a sense that they aren't about to.

In terms of briefings, Sony most likely walked away with it - but none of the showings were actually bad. Sony had the most "potential" on display, and potential is mentally vast. Microsoft showed an onslaught of games you'll be able to get and play this year, before the year is out. Nintendo was... Nintendo, giving specific, imminent dates but also foiling the dedicated gamer with their dedication to teen fitness. These are both decent, and depending on the brands announced, it can be strong. But they're very literal weapons for a battle of ideas, which (in the absence of retail product) such presentations certainly are. I don't know that it should be so, but people love to be told stories, and Sony's story was the best. Their price cut is really more like a fire sale, but everything else - from Home's dystopian brandscape to the Killzone 2 demo no person was allowed to play - was potent, like myth.