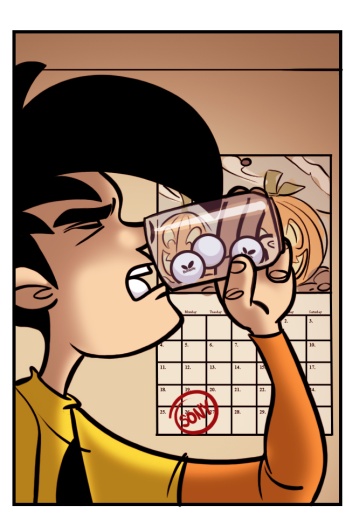 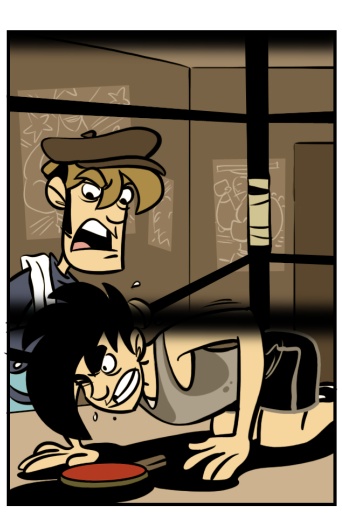 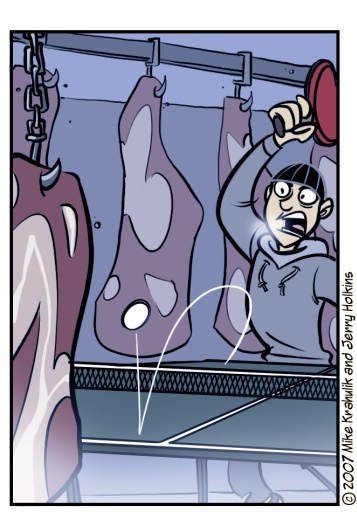 Last Friday saw the long awaited conflict between Penny Arcade and Sony erupt into fierce conflict, as rackets were drawn from the sheath and the respective battlecries were gutturally delivered. Our warcry was not sufficient to claim victory: the bloodthirsty gods it was directed toward were otherwise engaged. The final score was two rounds to five, their favor, but more than any previous match we made our opponents acutely aware of their own fleeting mortality.

Robert won the match at the top of the ladder, but doing impossible things has always come easily to him. Gabriel claimed victory as well, in a savage round, thanks to his natural brutality and also his unique regimen. I don't know if it's possible to be "proud" of a friend without it feeling strange or condescending, but I shall endeavor to learn the trick.

The cross section of SOE Seattle that we were able to meet was really an incredible cast, sufficient to create the foundations of an epic drama. When I heard that they had opened a studio up here, I thought that perhaps Sony simply fired one of their hateseeds from an orbiting warship and let it hatch as they had done elsewhere. But, no: SOE Seattle was already a studio called FireAnt long before Sony arrived with the flowers and chocolates. An ex-Microsoft cadre which fled after Mythica got the axe, this team is now the clandestine force behind The Agency. They're also handy with power tools, creating an eight foot tall statue of Diabolus from a previous comic - complete with its six bepaddled arms, gripping a chain which held the Fruit Fucker in a position of submission.

I probably should have caught the foreshadowing there. My own match began with two losses, and then two victories, the optimal trajectory for the thrilling comeback I was unable to deliver.

Smedley wasn't able to make it up, though our beef was originally with him, which virtually guarantees a rematch. Even so, the presence of our true foe would have altered the character of the event deeply. As it stands, I met several people who I would love to meet again without a sporting pretext. I would gladly meet them with the pretext established, also: to laugh hard across the battle plain, drawing the paddle up so that its red eye gazes out from the heart, then spinning its face to black with the grim finality of the tomb.

we'll eat you up, we love you so