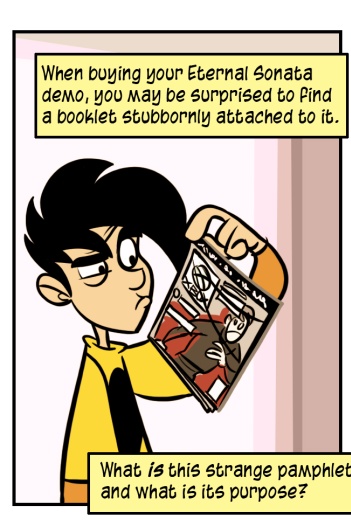 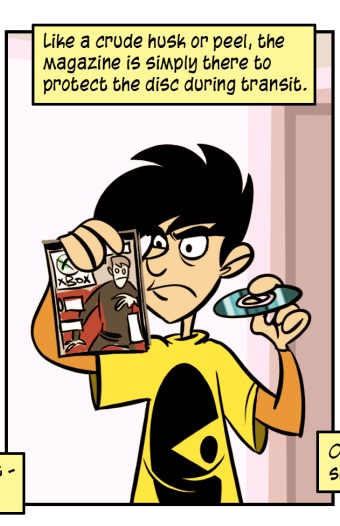 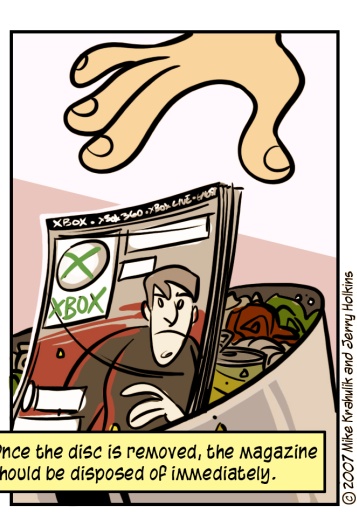 It took three separate discs and two consoles to finally work out the Goddamn kinks, but we were able to play almost the entire Eternal Sonata demo. Almost! I wasn't aware people were still boiling discs, presumably in black iron cauldrons where carrots bob, but I don't want to live a life where boiling discs is normal.

While the platter skittered around in the drive - impossibly, like a cat trying to climb a marble column - I flipped through the magazine which was included in my purchase.  Are they seriously talking about the Halo 3 beta?  After downloading something like six demos last week, to go to the store and buy them was a bizarre anachronism. I'm not sure how the demo was secured exclusively - does placing a demo on Live cost the publisher money, and this was a sweeter arrangement?  I mean, they'd already dished it up for free in another territory.  In any case, it limited access to good content, assuming you could even get at the content after chipping away at its inedible shell.

The combat system in Eternal Sonata lets you make choices as turn-based combat once did, but presents concessions to modernity in the form of each turn's time allotment. Each character has a certain number of seconds in a round, and each attack takes a certain amount of time, and it feels like an action game while you're inputting these commands. Also, your attacks change depending on whether or not you are in light or shade, and creatures physically change based on the same thing, so those little gourds you're always kicking around become huge monsters when they enter darkness. That's interesting, the game is beautiful, and I think it could go places.

I meant to mention it before: Keek and I conquered Super Stardust HD a week or so ago, and it was a supremely satisfying experience. The difficulty was perfectly constructed: we played in co-op mode, and while this mode gives you two ships, there is a single pool of lives. If your lives run out (lives!), but your friend is able to clear the level solo, you come back in with a bonus ship. It creates a really fabulous tension, especially in a game where there may be well over a hundred discrete targets for your partner to overcome. In any case, it's Asteroids played on a spherical field, but if you want to get anywhere in the later levels you need to have defined roles and communication. The challenge was exactly right: there's no cheap hits, only savage punishment for poor play. Assuming that you own a Playstation 3, I'm hoping you can spare a few bucks for Super Stardust.

Peter Moore is going to EA, and now Microsoft is going to get someone who used to work for EA, in some modern pantomime of royal marriage. We've certainly had our position on his style, at least, his style external to the company - as collected here, in the ancient scrolls. The longer he's been at it, though, the more we've enjoyed it - up to this clip from Kotaku, where we were finally allowed to see the man's candor. He was already long gone by then, of course - the offer letter was dated June 5th, and who knows when talks actually started. I imagine that lends itself to more "direct" language. "What are they gonna do," etc.

It's certainly time for a change, though. The system is launched, and now it needs a different kind of propulsion. Specifically, it needs a real son of a bitch, a murderous bastard with a knife in his teeth and a cruel laugh. The new guy looks nice in his picture, but I hope there's sin in his heart.