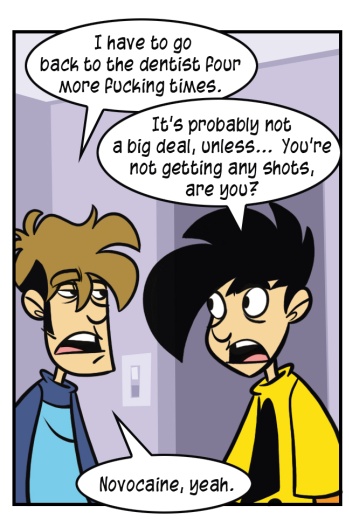 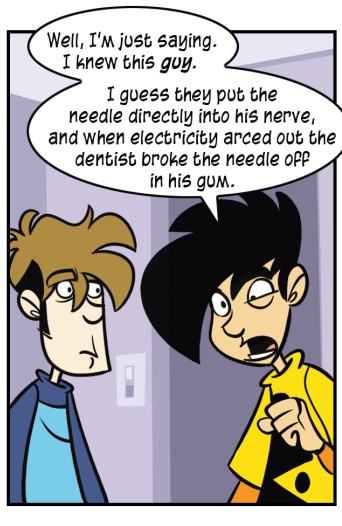 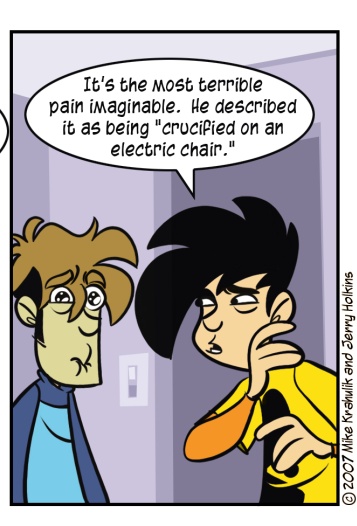 After yesterday's brutal visit to the dentist, the intense pragmatism of the denture plate stands crisp and full in my mind. Brushing my teeth in the dishwasher each night strikes me as very modern, and I endorse it. Apparently those mouth criminals have decided what's best for my craw is to meter out the pain via a kind of agony payment plan.  The hygienist raised her hand at this suggestion, enthusiastically, apparently waiting for the "high five."  It was declined.

(edit: I have been reading online, and I think I have scurvy. If I were to bite into a Charleston Chew, my guess is that the teeth would stay lodged in the bar - in a straight row, proud and tall, like soldiers.)

The scary story in the strip was told to me by Dave Murphy, a man I worked with before Penny Arcade, in a period that seems like it was part of a different life. He was a member of not only "Ducks Unlimited" but also the "National Wild Turkey Federation," organizations that sound like they would be fun clubs for birds, as opposed to clubs for men dedicated to the shooting thereof. So this was a tough, outdoorsy motherfucker who told the story in a cool, even way, as though it had happened to someone else.

There have been a few stories recently about Microsoft going back on their pledge that no games would require the Hard Drive, most of which redirect toward a site called "Xbox Family" which I've never heard of, but it sounds about right to me. As far as I'm concerned, this is only the necessary correction after two long years of caustic error. Of course, don't believe this is some bold inversion of prior policy. If you're dropping the strategically correct product, the rule never applied to you in the first place.

FInal Fantasy XI - as delivered on the Xbox 360 - undermines the entire platform with its aberrations. Not only did it require a hard drive - and this was well over a year ago - it also allows online multiplayer without a Live subscription. So the idea that we are just now entering some untracked new realm is worth its weight in LOL'd. There are no "exceptions to the rule," there are only deeper rules. So if GTA IV comes out... whenever it comes out, and there's a sticker on the front that says you need a hard drive, this shouldn't surprise you.  Frankly, I'm overjoyed, but I own a hard drive.  They can't let things continue as they have, their industry partners won't stand for it - and they can't allow stories like this one or this one to persist.

The only thing now is to see if it's a full solution, the gate swung wide, or another half-measure like Live Arcade's incremental increase.