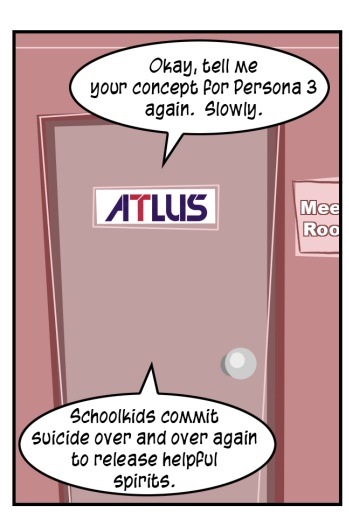 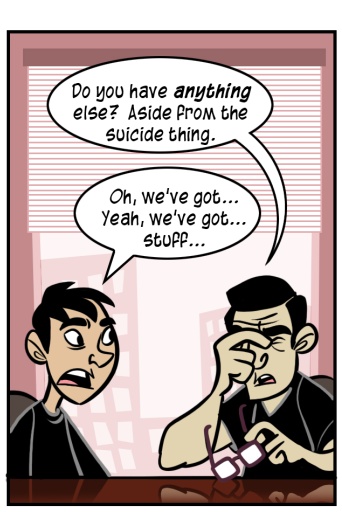 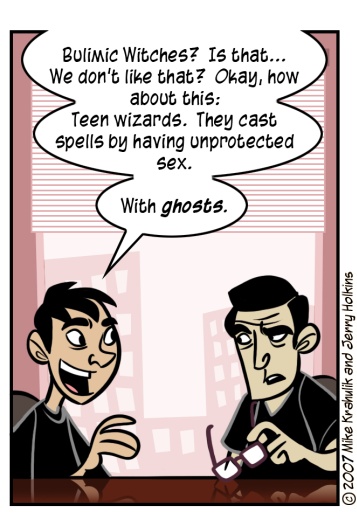 Talking to an Atlus Operative at San Diego, I was able to secure for myself a copy of Persona 3. Yes! This is the game where your characters shoot themselves in the head repeatedly in order to succeed. They aren't real guns, but I doubt opponents of the medium will be looking that closely.

It's clocking in some fantastic reviews, further evidence that the Playstation 2 is still the place to be for the genre. The last third of the newest 1up Show is devoted to an extended dialogue on the game, so you might investigate that piece in advance of the game's release if you're curious. They've played it a good deal more than I have - like virtually every eastern genre entry, there is an interminable initial period where you have only nominal "interaction" with the proceedings. Once this period came to a close, and once school got out - you know, in-game - I was able to feel something akin to pleasure.

I'll dig in deeper this week, now that I've penetrated the game proper. My least favorite hook is Japanese Kids Going To School, I mean, in the entire world, but I'm drawn to the game's odd cosmology and its ridiculously fast paced turn-based combat. I like the voice acting too, actually - there are some real successes here. Some of the Japanese words they speak sound odd, though, like they're trying to un-chew something they have eaten. The translation and execution of the dialogue are so good that, ironically, the original Japanese words just sound crammed in.

I'm sort of between games at the moment - though Persona will probably change that - but none of the games that I fantasize about are out. I know that in a week or so (and following thereafter at roughly one week intervals) we'll be running around screaming in the streets while hot, literally hot new releases streak from the sky like meteorites. I can't actually store up any of this time, but the urge to rest, rest before the toil ahead is for some reason very strong.

It's strange, then, that even when I am "between games" the stylus is almost constantly pressed against the lower screen of my DS, flitting here and there, wringing entertainment from this tiny machine. It's as though I don't consider it higher order gaming. Perhaps this is what makes the system so successful: it is content to rest there in the margins of normal living, without demanding the fullness of your being.

the pull of one magnet to another