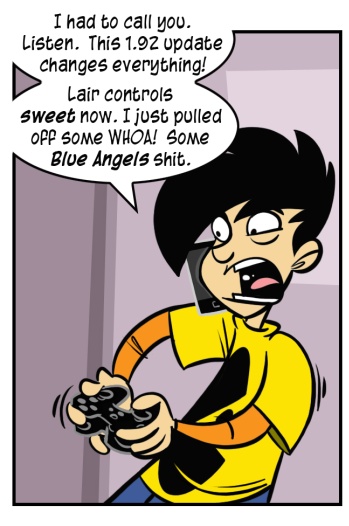 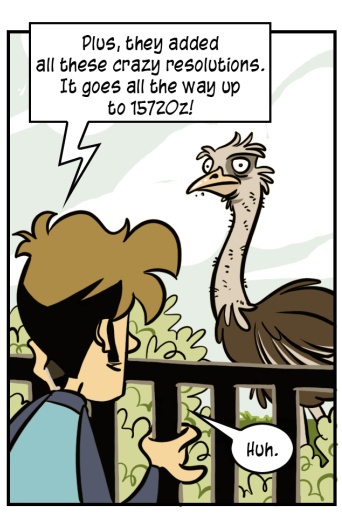 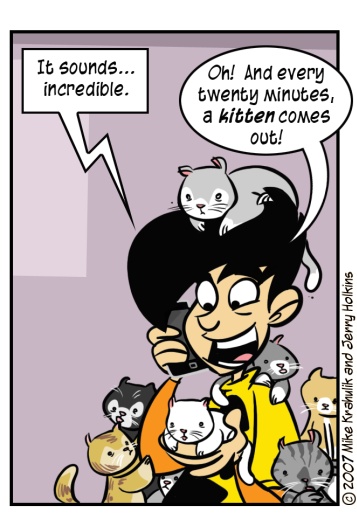 Sony hasn't been entirely clear regarding what their 1.92 update for the Playstation 3 actually does, suggesting that it "focuses on some PS3 compatibility and playability issues for select titles," but our own experience with the update has been conclusive. In the Internet's dark places, aggrieved Lair fans are suggesting that this update improves the game's motion controls, and that each media outlet must rescind their previous scores. I'm fairly certain this is magical thinking - neither Sony or Factor 5 will say with any specificity, and now that both our PS3s are updated it would be impossible to test.

Typically we don't take the traditional holidays off, nor do we take off non-traditional holidays, such at the Feast of St. Motherfucker - a holy day that I've only just now invented. Gabe's father was around, though, and golf seemed like a good time investment. Reading greens and choosing clubs for other people is about as far as I get, so for me the social aspects of the game are paramount. Standing under the awning at the driving range, it's hard not to see where EA's Tiger series could improve.

This year's lobby system is much improved over last year's, but I'm not sure why the lobby itself couldn't be a driving range. This is how virtually any actual round of golf starts, with every person hitting the bucket they bought and lamenting their performance. A few of their minigames would work just fine in this context - don't create a custom game to play them, build all of the basic play into a casual, central experience. From here, modes, courses, and wagers are established. When new people pull in, carts can be heard.

Links for the 360 wasn't as complete as Tiger, but it had four player modes first - and it had a means to play Speed Golf that Tiger should loot from its fallen enemy. Essentially, you play the round as normal. Everyone else plays the round as normal simultaneously, and shots are keyed to a certain color so that the arc of each person's shot is visible to all other players. They need to steal this - throw the name of each player on there, use the face, whatever. This needs to be how it works. You can play an entire course in a quarter of the time.

The RPG metaphor really worked the first few times I bought the product, but it's really lost its currency with me. There's a point - and it may be with the '08 version of the product - where the number of courses are such that I don't actually want to pay sixty dollars again just to lose all of my character progression every year. Gabriel's suggestion is to approach it more like a fighting game, which is to say like Mario Golf - with discrete golfer archetypes that have a suite of skills. I'm wondering if Guild Wars doesn't have the answer - full priced expansions every year, with a perpetually tracked online experience where your prior purchase actually increases the value of the next. Let all play - online and off - be a part of the core experience, let all play hone your ability. Don't wall off online play into some purgatory as it is now, untracked, outside of the normal scheme of advancement.

With these thoughts in my head, excited by the sun-dappled future we had envisioned. we sat down to play a round online the next night. After determining that one of us couldn't play at all or it would crash the game for everyone - a weird kind of crash where you can't play, but you're able to talk to one another about the crash - we were able to play eight holes, at which point it crashed before a victor could be determined. They've only just made online Photo Game Face available for Tiger, for the first time since launch, but they had to deactivate online features for two other titles to do it. So, no. I don't have high hopes. 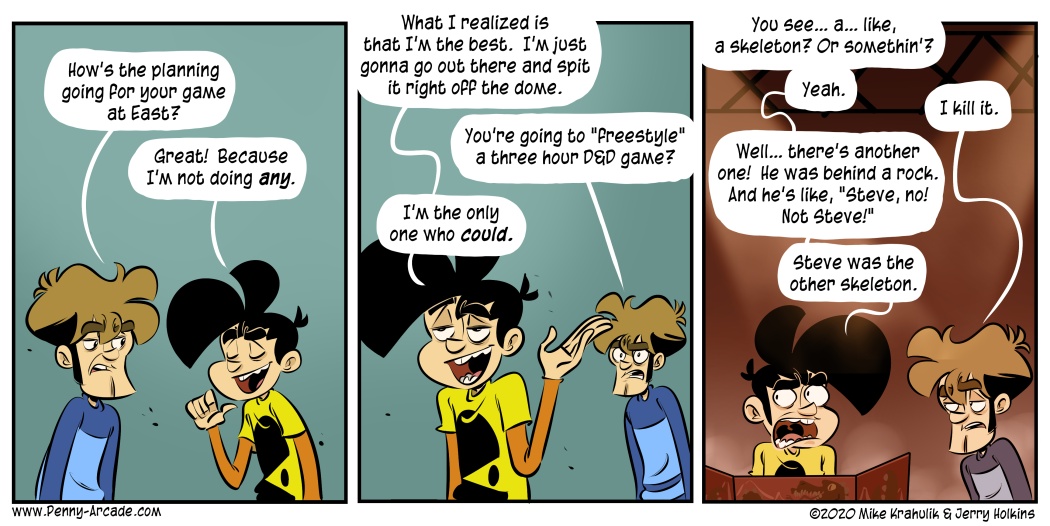