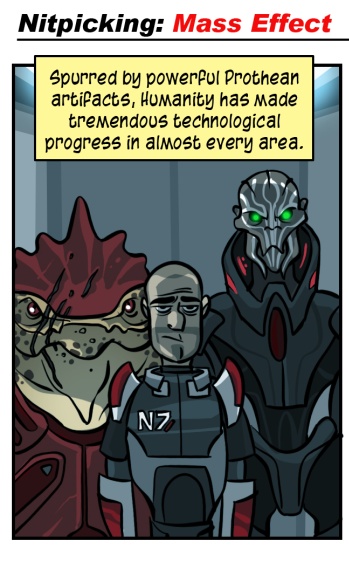 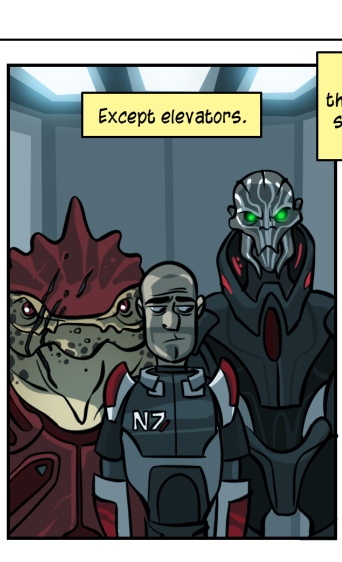 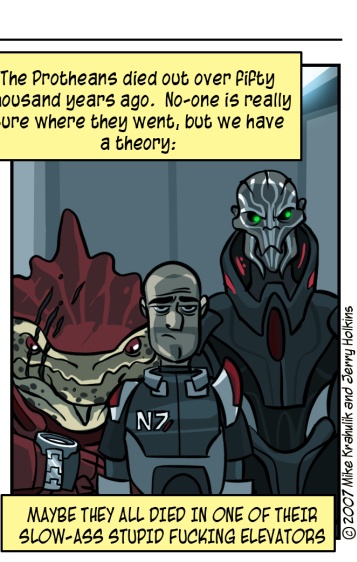 Mass Effect is odd in that it is simultaneously an argument for and against the 360. Utilizing their northern devilry, BioWare managed to jam a ridiculous amount of content onto a single platter. They've realized their cinematic ambitions in a way that will deeply alter your expectations, and they've done so in real-time sequences that probably kept the game from ballooning to three or four standard DVDs like other RPGs on the system.

At the same time, Microsoft's dogged insistence that they retain a model without a Hard Disc has done the game a bad turn. It's an experience that either needs a full install option or a significant cache, and it's got neither. So you're stuck in these ridiculously long elevators, or loading just for fun as you run down a hall. It's happening all the time, and the product is worse for it. The elevator in the Normandy is especially bad: other elevators in the game are long, so you're trapped in a box, but it's a box that moves quickly. The one in the core of the ship moves a centimeter at a time, inching its way to the belly of a ship the way a basketball might travel through a python.

The Shepard seen in the strip there isn't mine, of course: my evenings (and, indeed, my heart) are now devoted to a certain Sci-Fi lady. Her name is so long and so dense that looks like it may be encrypted. That's really the sign of a good name, in my opinion: that it might be mistaken for a PGP key.

I think Monday is the last one in the series, the last serious one, and just after that you'll be knee deep in Space Opera and will likely be lost to the world. Put in some more time last night, largely just a-ramblin', receiving distress calls, rolling deep on toxic alien globes. It's very talky, but, well... I'm me. Of course I like that.

Rock Band's downloadable content "story" has been revealed, and it's better than I expected. The idea that some individual tracks might go up to three dollars is a little troubling, but I don't know how common that practice will be, or if it's designed to get certain high-profile or brand-new tracks into financial striking range. The rest of it is more than tolerable: singles from one to two dollars, and three-packs for five-fifty. The "expectation" I alluded to earlier was that they would offer a better product for the same price, i.e. adding the drum and vocal tracks essentially for free while competing dollar for dollar with the Guitar Hero content. Offering more for less was not really a scenario I entertained. There are a lot of winners on the release schedule as well: Metallica's "Blackened" has been my fantasy from the very beginning, but I never thought we'd actually get it. There are other tracks, other good ones, but once I saw Blackened the rest of the list devolved into gibberish.