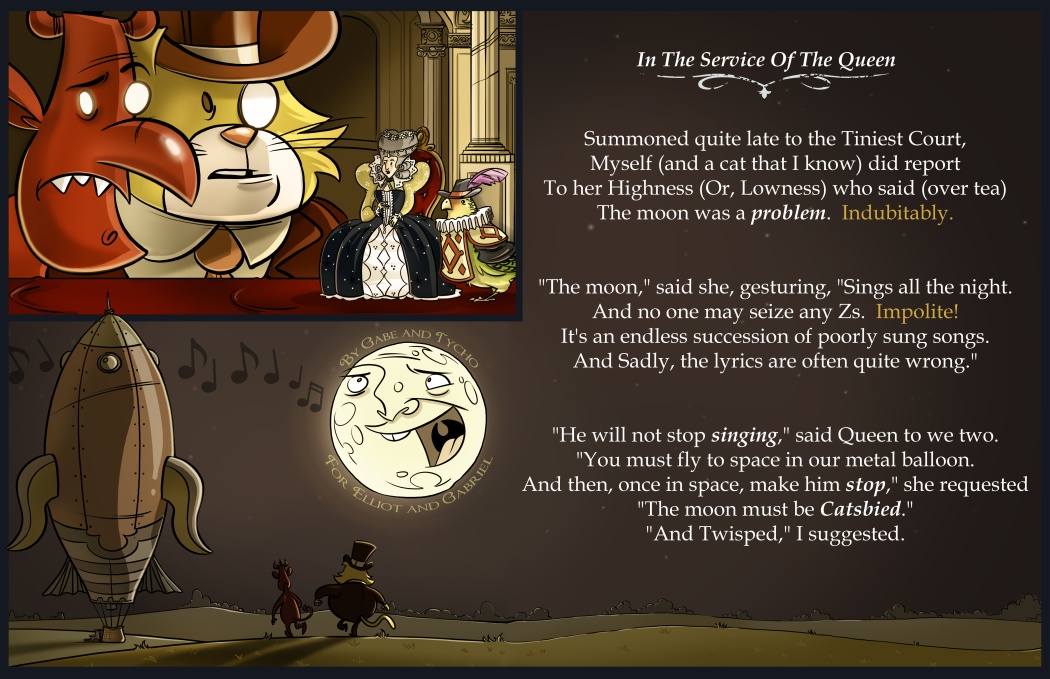 Readers warned us that if we tarried much longer, we'd have gone an entire year without a Twisp and Catsby comic. In the face of this terrifying revelation, there was little we could do but begin a two-part Twisp and Catsby storybook detailing a secret diplomatic mission. We always meant to make a full book of this story, and I guess we could still do that if people really liked it. The first print we did was essentially a single page of it - but, as you will see - there are more pages.  A high-resolution version of the strip can be found here.

Invariably, when reasonable people are discussing Guitar Hero or Rock Band, that forum smart guy oozes in somewhere near the middle of the thread and tells people that they should be playing real instruments - presumably, like he does. Put aside that Mozart has missed the point completely (i.e., why don't you play for the real NFL, etc). The fact of the matter is that he is quite simply wrong. And not just wrong: it's that thick, unctuous kind of wrong that masquerades as erudition. He is, in fact, a yokel - and he's operating under some pretty romantic notions of what constitutes an "instrument."

I wrote about this a while ago when talking about the remix mode of Frequency, another Harmonix game, and how it made the PS2 controller a kind of instrument. That idea fascinated me. Actual instruments are not especially ergonomic, in general terms - they are not engineered for use. They need to account for crass physical laws to epitomize their function. Instruments are beautiful, let me be clear. But they are not, themselves, music.

These guitars are only toys because they are limited, at this particular moment, to playing other people's songs. This is a software problem, and not representative of some lasting defect with the device. It's already been resolved by the community many times over. When Harmonix delivers a composition suite with the next Rock Band (or the next), and people start creating and uploading their own albums, it's going to be pretty hard to maintain the fiction that people are playing with toys.  Between the five keys, combinations of those keys, and the "hammer on, pull off" mechanic, you're talking about a ri-goddamn-diculous number of states - even before you expand it with pass-thru USB style devices that intermediate between the guitar and the host device. I assume I don't need to make the case for the drums: the peripheral itself, in its unmodified form, wouldn't look out of place on any stage in the 1980s.

Of course, the Rock Band guitar would need some modifications in order to be used seriously for this purpose - for example, it would need to work. As these games reach prominence, there is no question that a higher end "prosumer" option for a more robust device will be met by the market. In any case, of course some people don't like it. We're witnessing the democratization of music.

streaming out of the magnets