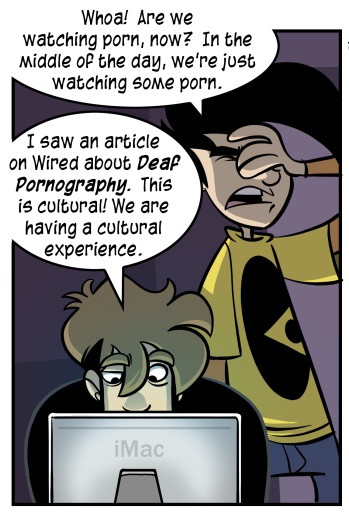 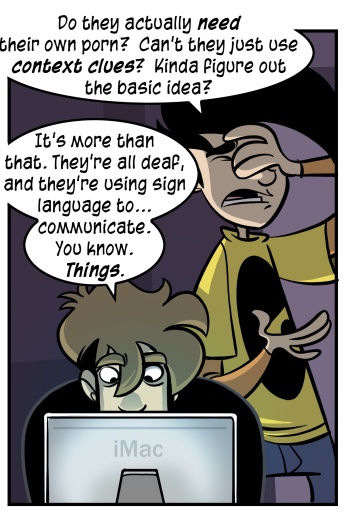 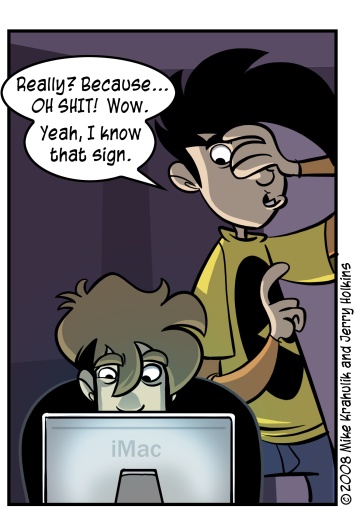 An actual conversation, transcribed with precision, and then converted into comic form.  It's a comic that required a tremendous amount of research, but we take our responsibility to you very seriously.  Indeed, the strength of this dedication gets us in trouble sometimes.

For those of you who would like to know what happened after the last post, let me bring you up to speed:

We were able to fish the signed DS out of the UPS bin in advance of the pickup, so that tender collectible will go up in an eBay auction on Wednesday - acting as a coda to this year's Child's Play. It's been replaced by a common, absolutely ordinary Nintendo DS, which isn't as cool, but what do you do? Hopefully their naughty cookies will be a comfort to them in this dark time.

My apology was accepted by the man who sent said DS, and we talked all night on the phone. We are now considering a fall wedding. The first part is true; you may disregard the rest.  Or keep the last part, however you want things to play out.  We can make this collaborative.

My job, which I usually think of as "uploading jpegs," is tremendously complex sometimes. Let me explain. If someone involved in the promotion of a game sends me a DS that may be used either as a personal gift or as a donation to charity - as was the case here, according to the letter - does the latter negate the former? Or should we determine the propriety of each possibility as discrete moral event? We were talking about a portable game system a minute before, and now all of the sudden we're talking about ethics.

There are people in the games industry whose job it is, literally, to befriend you - and you must constantly correct for it.  I don't apologize for this process.  If one wishes to write about videogames, they must constantly bat away sucking, vile tendrils.  On this topic, you will find wide agreement.

It may be that you don't care about things like this - but I had better care, because I have a responsibility to you.  People have been trying to get to you through me for years.  I don't believe this situation falls under that distinction, but even so - I'm uncomfortable with the idea of Child's Play donations coming along with review content through the PR channel.  I think it deserves protection from that.

i'm busting up my brains for the words