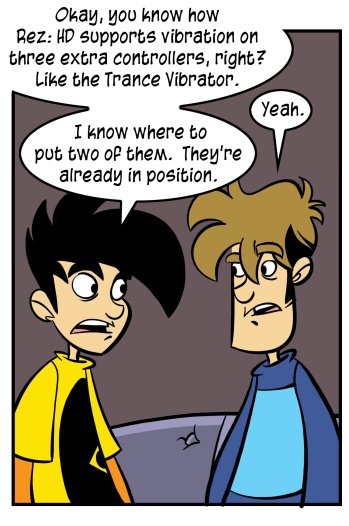 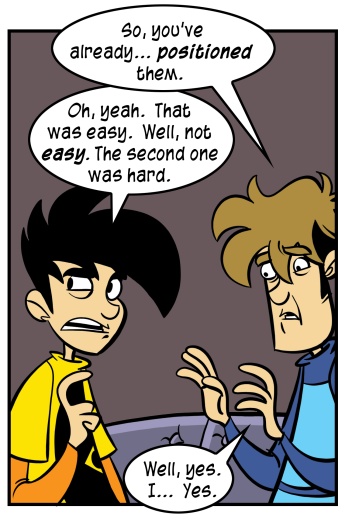 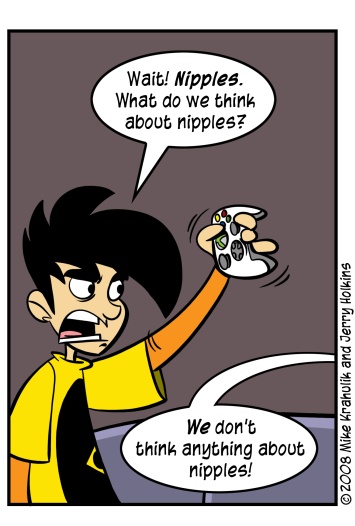 It wasn't until the strip was completed that I realized we had written two comic strips at the same time. Gabriel thought this comic was literal, and I thought it was about miscommunication.  At least, I hoped it was.  This is a fantasy to which I still cling.

I keep reading that Xbox Live is still having trouble - to the extent that Kotaku is delivering daily updates on the subject, as though Live were being held hostage. We wouldn't know if it was having trouble or not. Somehow, the scenario that began with my getting him a figure has resulted in everyone playing World of Warcraft again. World of Warcraft costs, on average, about ten dollars more per month than Live, but when your server is down for maintenance the rest of your games still work.

Live is an incredible service, and I have championed it. Live has even been good to PS3 owners, by establishing strong template for a publisher independent service that Sony must counter. The service itself mediates joins between different products and delivers a higher suite of functions that persists between all games. They can defray the cost of that service by charging for it, but that raises the stakes. If I asked you to help me move, and you said yeah, but then you realized that you had to do something else, you'd apologize and withdraw the offer. If I pay you money to help me move - if you are a moving company - and then you apologize in lieu of the agreed upon service? I don't even know how to describe that, and describing things is all I can do.

So, we've shifted daily operations to our Kalimdor subsidiary. If you've stuck with the game, it may be that the change has been a gradual process. To someone who quit in December of 2005 or so, it's substantial. I don't even recognize the Paladin class anymore. And I guess it rains now, sometimes? The patch before last apparently represents an eased traversal from levels twenty to sixty, which is great, because I'm at forty. This is probably part and parcel of the "broadening effort" they're running currently, pushing the product even more mainstream with their genuinely funny ironic celebrity campaigns. There's more to do basically everywhere, and the game feels more humane as a result. It's important for the product that people be able to emerge from the Dark Portal and sample the new (pay) content, and if that means the progression has been greased then, by God, so be it.

Gabriel turned to me after work yesterday, saying, "I'll see you tonight... In AZEROTH!" It was at this point that he raised his hands above his head in the demonstrative manner of the rural wizard. My heart raced with the anticipation of delight. I wondered: had we been enslaved by the game, again, just as Kil'jaeden enslaved the blue dragon Kalecgos? Did I just make a canonically appropriate Warcraft reference to parallel the events of own life?

Hm. It may be worse than I thought.

strange how i falter