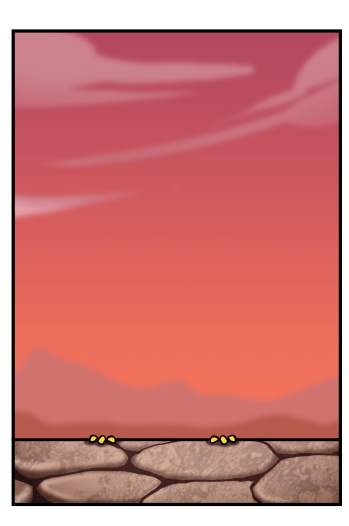 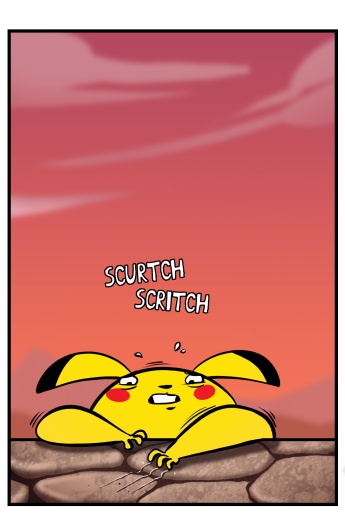 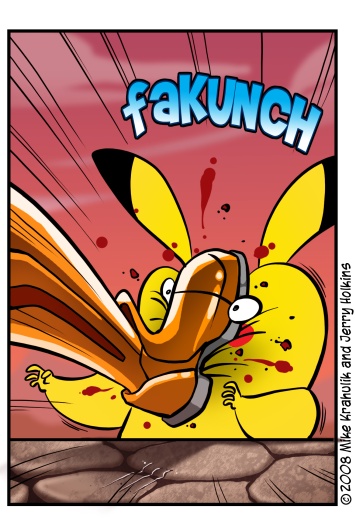 Fuck the shock mouse. Fuck him in hell, forever.

I don't hate him quite enough to quit, though. I'm surprised that Gabriel consented to draw this strip, since he worships at that jaundiced rodent altar, and the comic quite clearly depicts my character of choice pulping his scurrying god. No doubt I'll pay for my insolence later today. He is probably already charging the attack that will launch me into space.

He was trying to figure out why he likes Smash but not other pieces in the Nintendo oeuvre, specifically Mario Party, though he's troubled by the communist tendencies of Mario Kart as well - but Smash is nothing like those games. In the two titles I've just mentioned, a suite of "balance mechanisms" designed to promote fairness or randomize outcomes assert themselves. Enforced fairness has a way of feeling unfair to those who excel. If you're playing to have fun with your friends, these are all opportunities for joy. If you play videogames to express your dominion over others, they are impediments to your regime.

The Smash Ball is a good example of how this game is different.  Because our copy is Japanese, I'm not sure if it's actually called a Smash Ball, or if it is called a Su-Ma-Shu Ba-Ru, or what. It is an item that allows each character to use a powerful custom technique. In the other two games, grabbing this item would immediately confer its powerful effects - merely getting to it first would be sufficient. In Smash, you have to beat the shit out of this thing to claim it. And it's a physical object, like a combination of a balloon and a pinata, so that it floats and bounces when struck.  Even once you have the thing, you can still have it beaten out of you. And let's say you do get it off:  each ability is so idiosyncratic that it's still no guarantor of victory.

If I could go back to Mario Kart for a second, I was sort of depressed to learn that Double Dash was a mutation of the series, and not a lasting ideal. I'm sure it sounds ridiculous, but I'd been waiting so long for a cooperative racer that to see one finally delivered felt like the culmination of ancient prophecy. I was hoping this game would act as a beachhead, a forward position where other games could experiment with the concept. My fantasy was that this would all lead to someone (specifically, DICE!) delivering an immediate yet technical rally game where I could act as the rally navigator. It's completely fucking insane, but I believe firmly that there is a powerful simulation to be made there. Yes, a game where I just talk and talk. I'm sure you're just shocked.

In other GDC trivia, be sure to check out Iron Dukes, a fun (and also funny) browser game that grabbed the top spot in their IGF category. It's a fun grab-bag of miniature games in a nautical theme, with a nice little vein of persistence and progression running through it. Pay close attention to the item descriptions, which will rank as some of the best game writing this year.

worthless answers from friends of mine