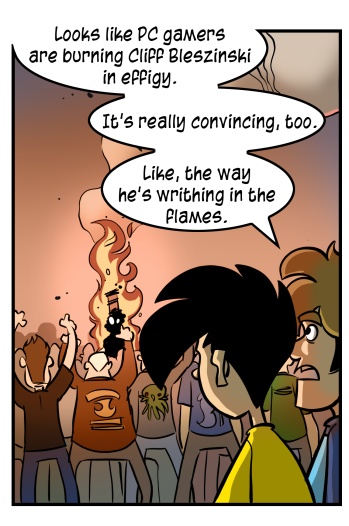 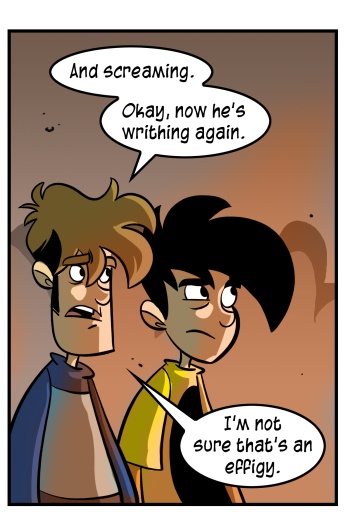 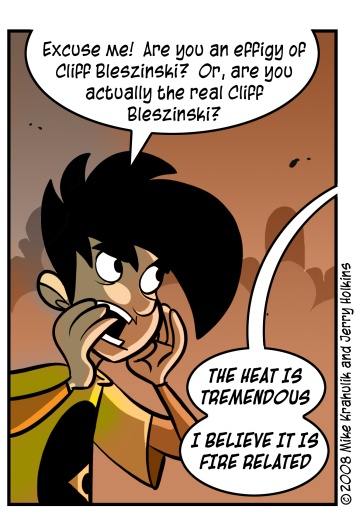 A week or so ago, I read over Stephen Totilo's off the cuff interview with Cliff Bleszinski, who is also known as CliffyB, and is still sometimes called Clefairy B. In it, Clifford makes a few personal observations about the PC as a gaming platform - namely, that it is schizophrenic in its focus. The industry itself apparently agrees, but it hasn't spared him any heat. Epic's Liar-King Mark Rein scuttled out from a rotting log to do some damage control, but noone on the Internet remembers anything for more than a week anyhow. It's wasted effort.

This "heat" I referred to, and it is not difficult to find, ranges from the merely rankled to full on psychotic episodes. To an outside observer, it must look like Stockholm Syndrome. It's hard to imagine that there are those who still see the PC as ascendant, and not merely one option available to gamers, an option fraught with costs in time and treasure that not every person feels like fucking enduring when they get home from work. The rationalizations at play in these threads are feats of such liquid mental agility that I wish we could put these minds to work on renewable energy or on the fabrication of advanced polymers. There are profound advantages to a hand-built, precision twiddled machine, running a (relatively!) wide open OS - I've done so for well over a decade. It is this generalized potential that Sony has done their best to emulate in their latest console foray. But it's certainly not the only true way to amuse yourself with electronics, and by dismissing the fixed gaming platforms you are actively sabotaging your own happiness.

You can't point to Valve's success - as so many do in these threads - and claim that the entire PC market is doing incredibly as a result. Valve is a single company. Valve isn't even a developer, in the traditional sense - it's a development environment, where by some bizarre alchemy newly hatched auteurs are thrown together with the best gaming humorist who has ever lived, and a few months later they deliver a three hour experience that overshadows the output of an entire industry. They worked on Team Fortress 2 for eight years. The 1.5 million sales of Orange Box on the console are, to them, something like a rounding error. Their software platform virtually defines digital delivery, community, and user created content. This is simply not what life is like for most developers.

Team Fortress provides an excellent example, actually. We started playing TF2 once our shit was out of the way recently, and there was a problem on Gabe's machine where the game won't run fullscreen. Yes, I checked the dropdown. Listen to my story: after updating this, and changing that, and looking up some other shit, and then rebooting, I was able to make it work. Mostly. "This is why I don't play games on here," he suggests lightly. And why should he not say this? How had we been enriched by the act? Not all toil is virtuous. Some toil is just regular old slavery.

there was never any good old days 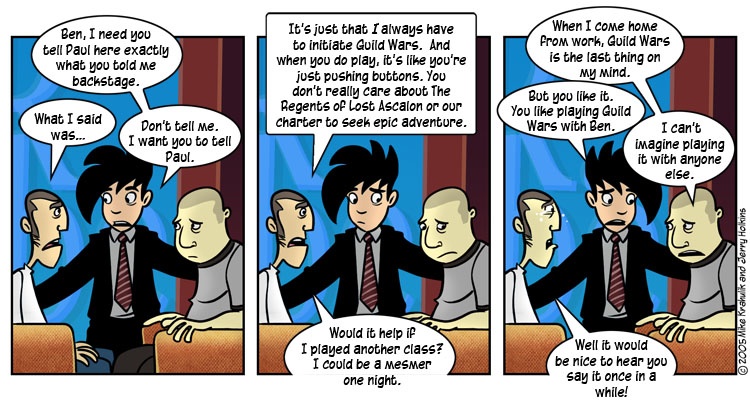