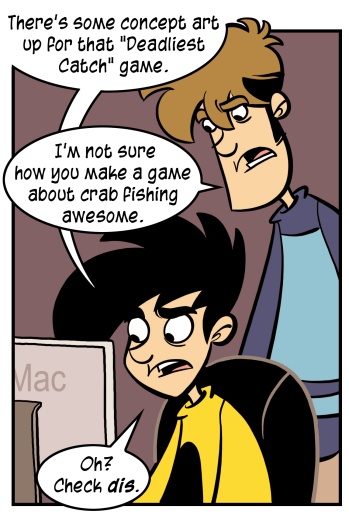 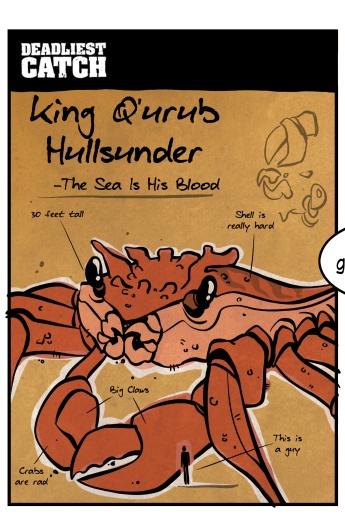 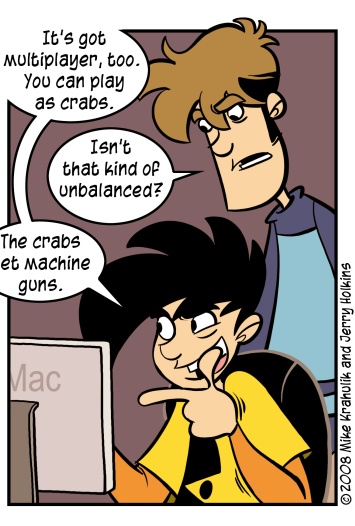 There is already a surprisingly elaborate browser game for Deadliest Catch, a television program where men risk their lives trying to outsmart crabs. The show has no right being as entertaining as it is, and the more we thought about an retail game based on it the more enthusiastic we became. This is true, and I wish we had recorded the conversation: all strip progress halted for forty-five minutes while we indulged in the creation of co-operative, asymmetrically competitive structures that would support the theme. The hook is very similar to Iron Dukes actually, the only distinction being that the treasure one hauls up is not gold, but is instead a prison full of delicious animals.

They dropped some concept art a couple days ago that hinted at a few radical departures from the show proper, including "blood magick," an "alchemical crafting system" and "a dark court of deep princes, risen to claim the Earth as their own." Does that happen in the show? I haven't seen the third season.

I continue to creep through the IGF contenders, consistently fucking blown away by this shit I even preordered one, earlier this week: World of Goo, by 2D Boy. It's being delivered on PC and Wii initially, soon to see release on Mac and Linux, and though I think that the noble Mouse is probably the best interface for it all platforms are richer for this title.

PC users who preorder end up with a Beta version of the game, the playing of which has made me a more complete person - there is a level five or six boards in, going around the top of the structure (you'll see what I mean), where I literally felt uplifted by the game. The gameplay starts where Bridge Construction Set left off, tasking players with the construction of structures made entirely from living beings. From the first beautiful menu - and yes, I did just describe a menu as beautiful - the world they've created is consistent, and consistently charming.