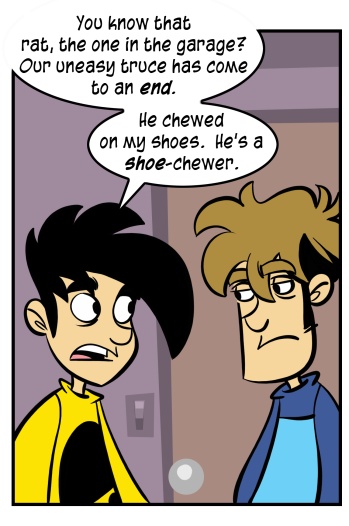 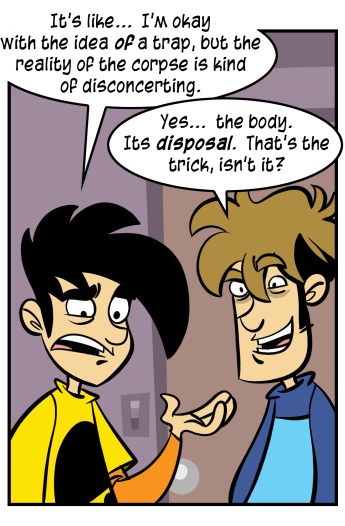 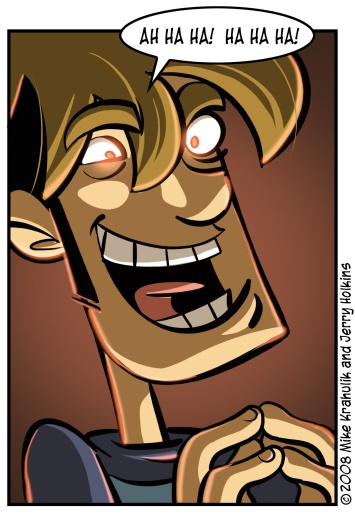 Gabriel apparently has a tiny boarder, a friendly creature with tidy fur content to dwell out in the garage. That certainly wasn't my experience with the genus, a tattered pageant of misery whose psychic reverberations are still being felt. I recall with unrelenting clarity the beast we secured in a humane trap, rolling and sucking air in its madness, placed on the table in a mockery of polite dinner. It had a musky, unhallowed scent like some primeval mustard, its yellow teeth so long that it could not close its own mouth. Threading its ten fine fingers around the bars, it cried out "We crawl, we swim! We nest and gnaw! We are WE, AND WE DEVOUR!"

I ran then, out of the house, turning in time to see that the entire structure - every stick of it - had been rats all along, rats piled atop one another in such a way as to suggest a house. The not-house boiled, exploding, a grey-brown wake of slopping pus and disease.

In any case, Gabriel's pygmy gentleman has chewed one end of one shoelace, and now he must be obliterated. Let this be a lesson to those of you who had been considering a trip out here to nibble on Gabriel's footwear.  It is apparently a death sentence.

I have a lot of affection for CCGs as you are aware, though my affection for buying them runs in cycles. I'll rudder toward single deck games for awhile, maintaining the satisfying deckbuilding portion while mitigating the truly fabulous expense of the genre, only to find myself drawn to the dynamism that the expansion model of traditional collectible games offer. I'm firmly in the former stage at the moment, after having invested in a few games online and off, and my credit card has become warm and warped with the constant swiping.

I was able to piggyback on Gabriel's growing fascination with the World of Warcraft version though, without a tremendous investment on my part via the Molten Core Raid Deck. Essentially another game "mode" altogether, players don't compete head to head but cooperate against this deck. They construct their decks in a synergistic way, which is pretty much the exact opposite of the base game, and sends them back to the shoebox for cards they might not have used otherwise. They must not have synergized sufficiently, because they were annihilated. "If you can't stand the heat," I suggested helpfully, " you should stay out of my subterranean magma pools."

I have to say that I was surprised at how much like a role-playing campaign it felt, to be playing what was essentially a "dungeon master's deck" against a number of "player decks." This is what players were afraid of, of course, back when Wizards put out the third edition of Dungeons and Dragons: a fully iconic, that is to say "card based," interpretation of the ruleset. I'm reading the same things again now that we're on the verge of 4th Edition. After this weekend's experience, I'm not sure it's something to be afraid of.