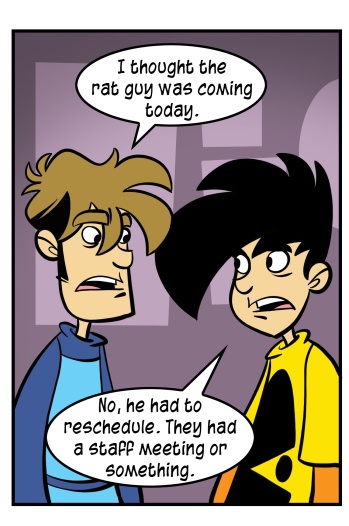 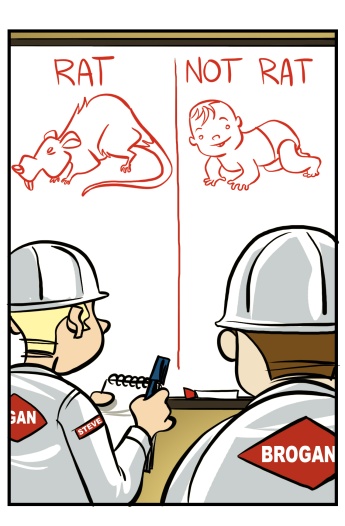 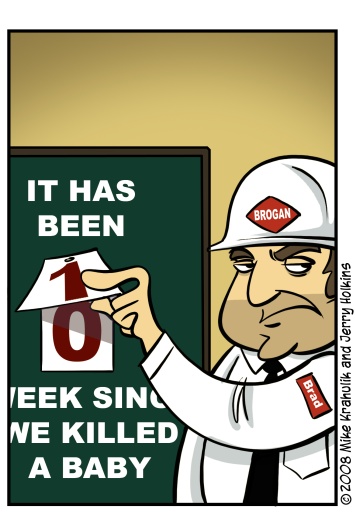 We find ourselves at Continuity's dark door again, apologies all 'round, but when Gabe's exterminator rescheduled the comic essentially appeared out of thin air. Let me assure you on behalf of Penny Arcade and the global brands we represent (beneath the umbrella firms "Brazen" and "UltraLith Consumer Lures") that we will observe our creative impulses more keenly in the future. The problem is that continuity, in its dormant state, looks like inspiration.

The iPhone has vastly improved my life with its every cogent, careful process, except the one that I really expected it to: as a music player. As an owner of the universally reviled Zune, I think that I had expected - once free of those vile, redmondite manacles - to dance as a lithe silhouette upon a monochrome tapestry. Mechanically, it has all my music, and its interface for selecting songs is whatever. But I find that the music I listen to is much less diverse.

With the Zune (or the Napster I used before it, or Rhapsody - this really isn't Zune specific) the subscription service is incredibly liberating. I mean incredibly. Obviously, this assumes that you are determined not to avail yourself of the Soviet Smorgasbord. The ordinary Hunter/Gatherer model of music acquisition and discovery, the one that has all this hipster nobility associated with it, really feels nonsensical by comparison. It's the same thing that used to come up with micropayments: when considering downloading an album, it's the difference between some guilt and no guilt. In general terms, I feel as though I met my lifetime guilt quota somewhere around seventeen years of age.

Short version:  I will gladly pay fifteen dollars a month as an insurance policy against buying bad music.

When I heard that Apple was considering going this route, obviously just a rumor, I have to admit that I breathed a sigh of relief. Services like this are generally considered failures in the marketplace, but for my usage pattern and musical appetite the regular cycle of purchase/regret/cull no longer has any shine on it.

I saw an interview with Jon Blow about Braid bandied about in several places, mostly as an opportunity to ridicule him for speaking in clear language about his own creative work. The person responsible for the game's painterly vibration is David Hellman, who I had the pleasure of meeting in the interminable Wii line at the last E3. He's done work for The Gamer's Quarter as well, cool work, which I found cool.

In any case, if you find David Hellman's art appealing - understandably - you might like to see his take on Tycho. When he was still doing his webcomic A Lesson Is Learned But The Damage Is Irreversible, you could commission a piece simply by donating to the site, a mechanism I scrambled to take advantage of.