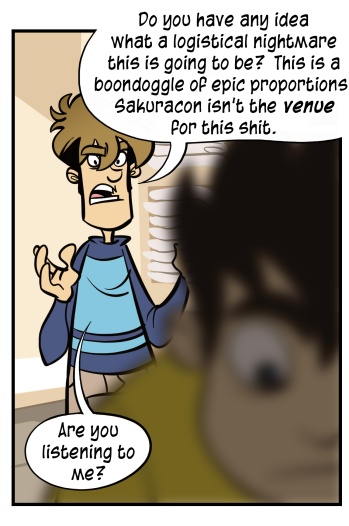 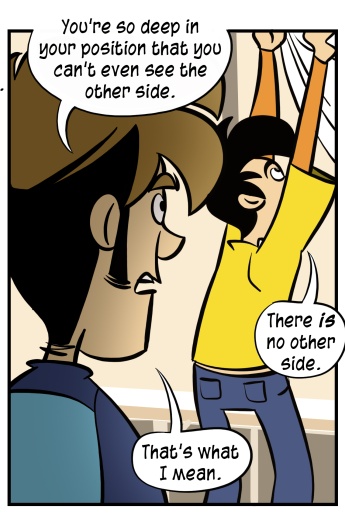 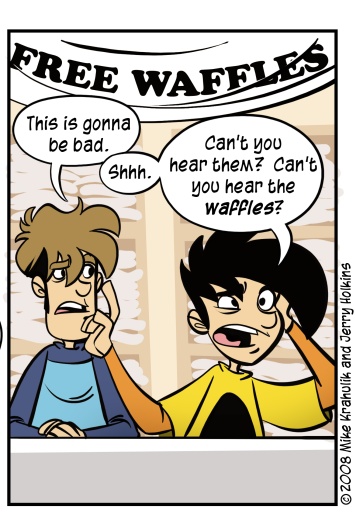 You should probably read the comic first.

Sitting at The Breakfast Club, gesturing to Gabriel over the summit of my "Hobo Scramble," I presented a powerful pro-waffle position. Its core assertion was that we should have hot waffles, smothered in chocolate ice cream, available for free at our Sakuracon booth. He's been trying to talk me out of it for a week now, because he has no vision, and I do: I see waffles leaping out of toasters and into smiling mouths. I don't see what the fucking problem is.

I tried to break down the essential position for him. "You're arguing for a universe with fewer waffles in it," I said. "I'm prepared to call that cowardice."

Tycho isn't constructed psychologically to argue for surreal snack festivals, so the focus was shifted to the more mercurial Gabriel. Once this took place, he seemed to take over the entire process, which lead to the construction of an additional strip that will go up on Monday. Should events deviate significantly from the fantasy - and when has that ever happened - we'll be sure to note the alterations.

I used to describe Sakuracon as a kind of annual psyche adjustment, a convention where people either didn't care we were there or were actively hostile, a process that I relied upon to leaven our status as Internet Kings. This held for a couple years, but no longer reflects the vibe. Indeed, this year I was even asked to judge a cosplay contest, which I did my best to bow out of gracefully. I'm fairly certain that a thirty-two year old man watching teens dressed as supernatural maids caper and gambol is not legal.  It's not something I want to explain to a judge.  More than that, my trips to Sakuracon take place in a kind of sociological context: I want to observe the motion of this community from our post in the dealer room, and be invisible everywhere else. Plus, I wouldn't even know who they were cosplaying as. I can't tell Yumiko Konbanwa from Kun-Sama. Is that Daimyo-Chan, Teen Shogun?  Your guess is as good as mine.  Honestly, your guess is probably better.

there are no words