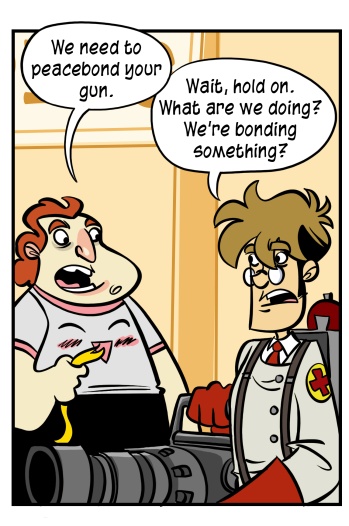 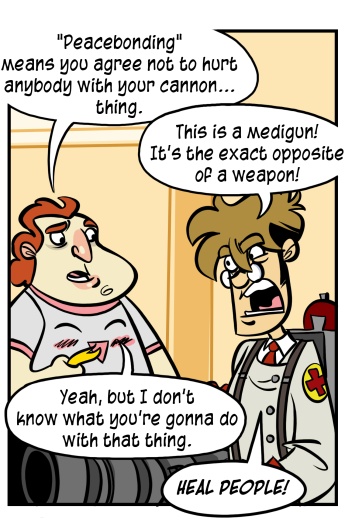 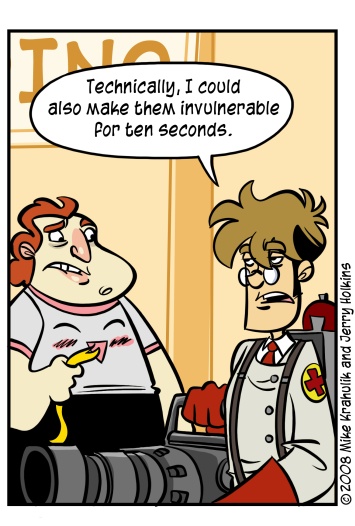 I don't have solid data, just my own year-to-year experience, but it feels like gaming cosplay has been on the rise since we first started attending Sakuracon. The Team Fortress 2 crews you've seen showcased on the gaming blogs are one of the newer ones, but Valve seemed to rule the crossover space this year: there were several Chells as well, as well as Aperture Science Technicians, their Weighted Companion Cubes in tow. These cubes were sometimes literally in tow, hoisted up on crates for easy transport. There was even a GlaDOS.

I kept my distance.

The more insular the group, the richer the jargon - Scientology is the ultimate example, of course, but strange things grow in any hidden place. I always thought bedwarming had a nice ring, for example. I have actively tried to mill lingo useful and appropriate to the gamer consciousness from the moment this venue became operational. Anime culture obviously has a lot of Japanese cross-pollination, so many of the words I learn at these things (like "hakama") just mean "hat" or something. But there is also con specific language that deals with particular customs, like Peacebonding.

When a weapon is peacebound, it is marked with a pink ribbon that substantially diminishes its drama and gravity. This signifies that you have entered into a contract with the convention not to draw steel and gut another attendee. This is solid policy, and we support it, because we bring our guts with us to this show. The policy continues: you can kill a person with almost anything, if you really put your mind to it. Technically true, but but now things are a little scary. Now you're starting to consider the very real danger you are always in. It gets lighthearted again quick, though, because you realize that the policy is being applied to virtually any object, granting it a malevolent connotation. When Robert was serving up ice cream, I noticed that they had peacebound his ice cream scoop. I saw one grimoire with the pink strip applied, which - given its perpetually shrieking cover - seemed pretty sensible. But a medic's healing gun? A weapon that "shoots" life? No, now we've come full circle. The train has left the station, and is en route to Crazytown.