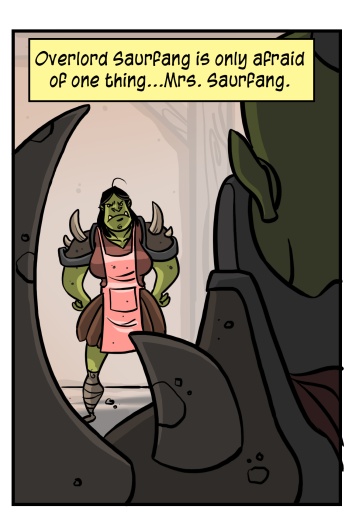 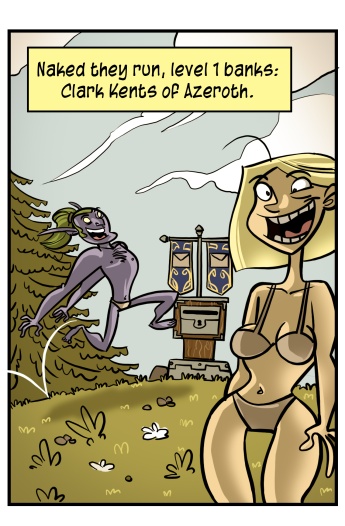 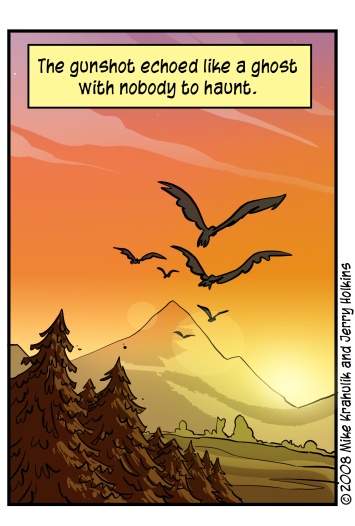 Early on, in the prosecution of our sacred contestatorial judgelating duties, we received the following entry from David Morgan:

Show me on this doll, where the murloc touched you.

It goes without saying that we found this entry troubling. And moist. And troubling. But along with his submission, he suggested that we take the winning stories and render them in comic form. We thought that was an excellent idea.

Here are the top three, along with their authors, in text form:

Overlord Saurfang is only afraid of one thing... Mrs. Saurfang. - Minh Huynh

The gunshot echoed like a ghost with nobody to haunt. - Dan Kaufman

I think their virtues are plain to see. The first one is exactly the right kind of twist on an old saw. The second one transforms the everyday into poetry. And the third presents a kind of Noir take on Azeroth that really just... worked. We couldn't stop there, though, and moved quickly to secure additional prizes for two runners up: both of which pack a lot of meaning into a small space. And here they are:

The child had vaguely Tauren features. He left, saying nothing. - Colin Butler

We've put mails out to each, in the interest of suffocating them beneath piles of well-earned treasure.

When one receives over thirty thousand entries - and when each entry can, itself, contain multiple sub-entries - certain themes begin to emerge. Some readers attempted to curry favor with Gabriel, pitting his character Dudefella (which I pronounce Du'ud Faela) against insurmountable odds, which he then surmounts. We received several entries that consisted of the same word, ten times. For spice, one reader sent us a mail with the word "pussy" entered nine times, followed by the word "vagina." I think he wanted to make sure we knew that he wasn't talking about cats.

We both have certain "weak points" that can be manipulated. For example, see what Gabriel has chosen. Do tell me if you can detect a theme.

“Capt. Dicks McBonerdong reporting, sir!” “What… class are you… exactly?” - Sylvester Rossi
My new spell is unstoppable. It's called, "Shit to death." - Super Jerms
He set his poop sock aside. Next: Cheetos and Dew. - Bill Coyle
Thrall stopped, sniffed, then gazed at the warlock, "Who sharded?" - Tnsyswonger

I like entries which are earnest or ironic. D J's "I would really like to win the WoW CCG contest" moved me, for example, as did these:

Patrons of all taverns knew well the hero's name: LleggolazXxX. - Bryan Climer
The softball game against Middle-Earth was canceled due to wyverns. - Dave 0
Another fallen foe, another silenced enemy. Jim Frobeard reflects. - Darth Gabby
I kill. But not for vengeance. For really neat pants. - Eric Westman
"You're a disgrace to Tauren culture," said the shaman Lolhamburger. - Erin
"Small trogg problem in Orgrimmar's basement." What an understatement, Thrall. - Claire Plouff
Once astride the mighty turtle her conquest began in earnest. - Andrew Snyder
"Bring my son," he croaked softly, "my... Tier 4 helm." - Adam
Adhemar grunted in frustrated anguish; this ruin, too, lacked bathrooms. - Adam Black
The duel was quick, the outcome certain. Kissybear fell, defeated. - Adam Gauntlett
Tipping his sombrero in salute, he dismounted his mechanical chicken. - Jared Klassen
You are not prepared!! Let Illidan's Tax service help you! - Don Lananty

Collectively, we liked ones that try to communicate the realities of playing the game:

Circle the Barrens, stalking your prey. Return to me. Repeat. - Dana Lacoste
WTB ninety days, eighteen hours of my life back PST - Chris Martin
I go fishing because Azeroth doesn't have enough repetitive shit. - Jeremy Murphy
In PVP Realms, if a player waves, I kill them. - (Also) Jeremy Murphy
A guilds eternal foe, neither Dragon nor Demon, but Drama. - Robert Uhi
“Killed by a raid,” Thrall’s sign said. “Back at 6.” - John Murphy
Cries notwithstanding, the thunderous pounding of feet was unmistakable: "Murlocs." - Jacob Weindling
"You wanna hang out tonight?", she asked. Can't. Too busy. - Chris Andersen

We also liked the (surprisingly few!) attempts to deliver on drama:

Gruul roared, like the stygian bark of an angry god. - John Wiggins
Foul new life smouldered at the heart of the crater. - Jay Freeman
She quickly sized up the new arrivals. They would do. - Joe Fourhman
For the dark lady, sword in hand, I travel north. - Jasn Painter
He touched it and felt the power that tempted men. - Qasim Jafri
"Please, use this training sword. My son never got to." - David Broyles
Goldshire stank, like cheap sex and the ego of newbs. - Matt Spencer
Stormwind burns and Azeroth falls, but hope lies in Lordaeron. - Joel Browing
Overcome, he falls. Fading. Grey lifeless eyes upon the Peacebloom. - Ben Fielden
Thunder Bluff to his back he flew with no regrets. - Josh Mckay
"In the Outland, she stumbled, turned, and saw the End." - Gabriel Edgar

2.4: Lore? What? Elves change teams, join goats from space. - Eben LaPier
Where did all those level seventy horde hunters come from? - Will Russel
"Oh God," he thought. "Do I have Razorfen Downs syndrome?" - Caleb Brown
"Why can't you skin Taurens?" he asked innocently, "...or Humans?" - Brian Thomas

I don't play WoW, but I make chainmail for cats. - Montana Baker

Thanks for the hot tip.

We really appreciate your taking the time to consider our challenge and put yourself in full view of our baleful eye. It probably sounds strange, but I was very proud of the site while we were sifting through these entries. It felt good to be at the helm of something that attracted such people to it.

she looked down at her armor and said, "i'm cold."
Random Comic
??? 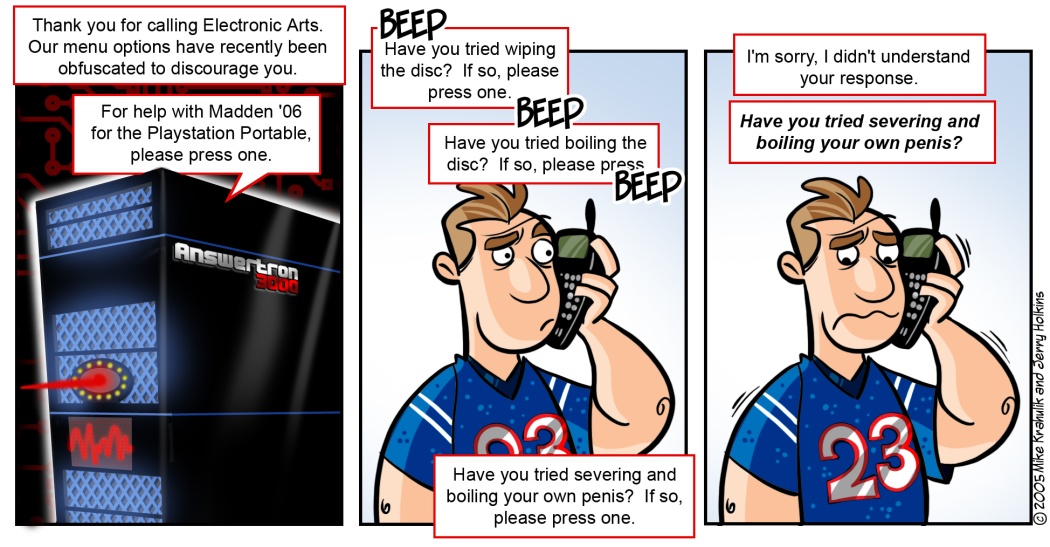