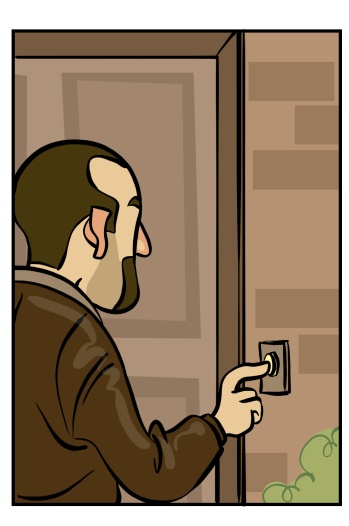 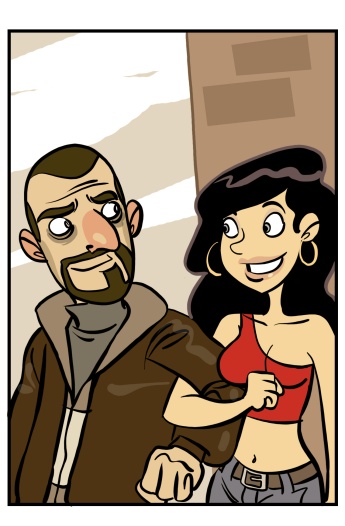 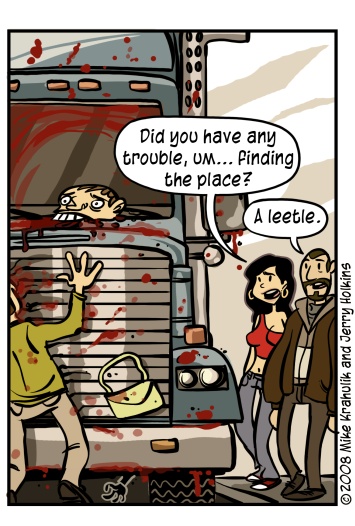 This probably happens to everybody. Next time we're late for a date, I think we need to steal a vehicle that doesn't sport such a large, almost inescapable grill.

We recorded a podcast for the strip, if you'd like to know what circuitous route we took to arrive at these three sequential images. The file can be downloaded directly, or (if you are some kind of digimal fancypants) snared via our RSS-enabled Suspension Intermesh. We'll try to make the site a respite from GTA news from here on out, but the problem currently is that something OMG happens with shocking regularity. The only comment I'll make is that in Previous Franchise Installments, you had to give up a lot to get the freedom it offered: you had to accept sometimes serious deficits in terms of gameplay, presentation, or multiplayer functionality that you wouldn't choke down otherwise. That's simply not the case with IV, and it's hard to feel anything but lucky.

I really feel as though The World Ends With You has bored out my consciousness, widened it, that I might have room to store the concepts it presents. It's made me a kind of host organism for its glory, and in the proud tradition of host organisms I'm here to pass on my writhing payload.

This is a game that makes digestion cool. Many games have food, it's classic really, but how many games model the size of your stomach? Foods act as buffs, with ongoing effects that last a certain number of battles, capped off with a permanent increase when they complete. This makes me so happy that I want to pop the fucking cartridge out and kiss it.

It's relatively easy to get your head around the game's notion of "In" brands that give you advantages in specific districts, with an escalating hierarchy of cool that confers ever more potent effects - but even the weapons are branded. In this game, your weapons are called "Pins," which act as its Pokémon Equivalent. They are ultra-desirable, have custom art, and there's a fuckload of them. The Pins themselves gain experience in a number of ways, leveling and sometimes evolving. These pins bristle with twinkling systems, let me show you them:

- Turn off your DS, and when you turn it back on, your currently equipped pins will have earned XP for up to seven days.

- Each pin has another set of statistics, parallel to the standard ones, for use in a mini-game called "Tin Pin Slammer."

- Set the game to "Mingle Mode" and earn a special variety of experience each time your system comes in contact with another wireless DS, regardless of what they're playing. I hope people are still slotting this game when PAX rolls around, because I think I could retire on that kind of XP.

There isn't time here to talk about the game's bizarre yet deeply groovy approach to two screen combat, or its sparkling, gloom-banishing soundtrack, or its omnipresent supernatural art. it's a game you can attempt to contain linguistically, but in the end you just sort of gesture toward the closest games retailer. I don't mean to be such a discount swami, but the game itself argues a very strong case.

I mention in the podcast that the Japanese district of Shibuya (where the game apparently takes place) may have some global position but is no more "real" to me as a result. The name might as well be drawn from a Scrabble bag. I understand now, after having done research on the Internet, that young people there are known to be brand-obsessed. They can be forgiven for this, certainly. They're only trying to seize any advantage they can. Their Goddamned town is under perpetual demonic assault.

i was the one worth leaving 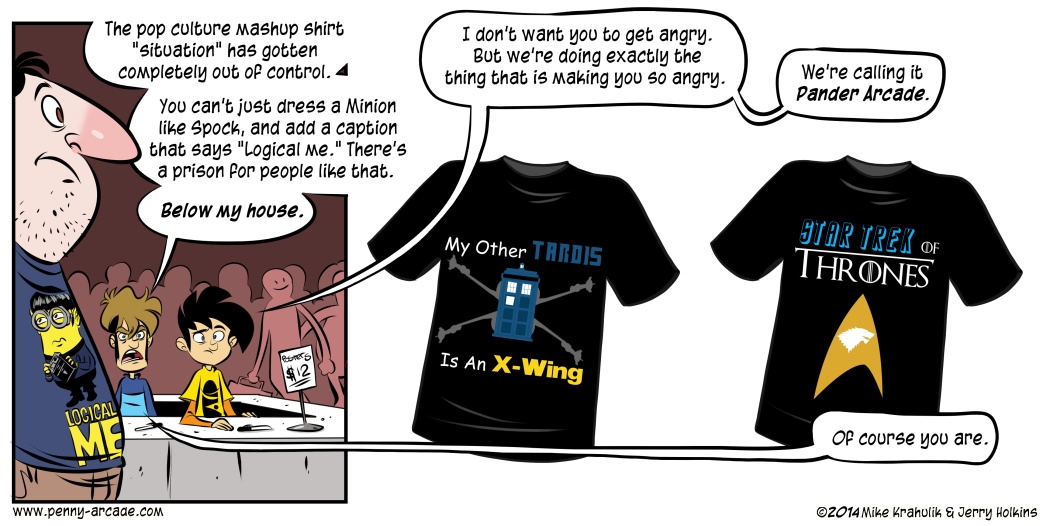