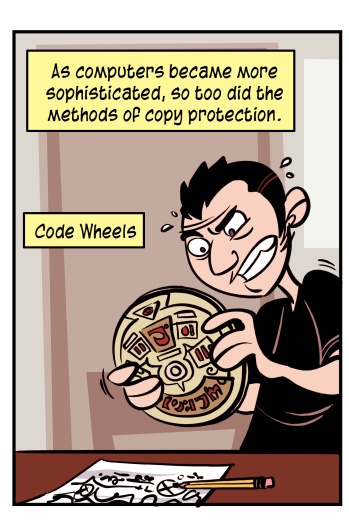 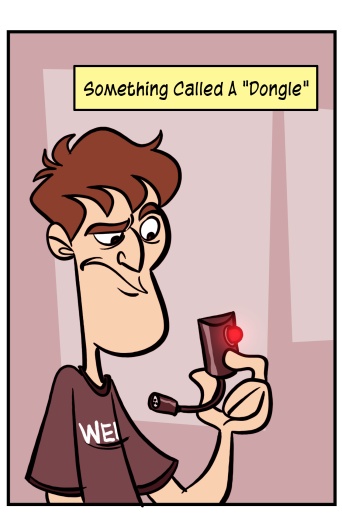 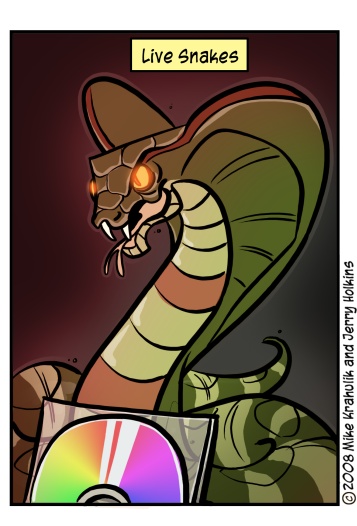 I used to see Chris Remo at virtually every industry event I attended - this was back when I attended industry events.  He was always in the same spot:  camped out low against some wall, laptop open, the perpetual newsman.  I know that the intersection of DRM and the PC gaming community is a nexus of interest to him, and I wanted to offer up a space to collect his thoughts. - (CW)TB

I've been reading Penny Arcade since it was mainly about the PC, the gaming system I grew up with, and a system that still holds a lot of sway in my heart despite my current pan-platform ways. So when Tycho asked me to write a guest post about DRM, I accepted (wouldn't you?), but I can't say the topic didn't cause me consternation.

After all, I haven't entirely made my mind up about this whole DRM mess, currently the Controversy Of The Week among Gamers In The Know--at least, that was the state of affairs last week, when I had to have this post prepared. It's a reprise of BioShock: The SecuROM Wars, this time catalyzed by Spore and, to a much lesser extent by virtue of proportionally less savior-esque hype, Crysis: Warhead--a game, by the way, worth of your attention.

My reaction is mainly one of weariness. On the one hand, this stuff can be a real pain in the ass. Though I've had no problems myself, I've heard and read stories of people unable to run DRM-enabled games at all, due to some arcane process conflict that SecuROM has perceived, be it real or imagined. And let's be honest: adding yet another complicated, irritating thing that PC gamers have to deal with surely isn't helping attract new gamers (or retain old ones) to a platform already fraught with complicated, irritating things.

On the other hand, I can't help but feel a lot of the vocal protestors are simply getting caught up in the righteous fury of the moment. It looks like we're at five activations per game now, up from three; that's unlimited installs on each of five PCs, as I understand it, and a deauthorization tool is coming. Realistically, how much more do you need? Obviously, it's not as good as "infinity installs (plus one)" but can't we just come to terms with the fact that no amount of internet petitioning or Amazon guerrilla warfare is going to take the activation limit out of the realms of the finite?

On, let's say, a third hand, it is preposterous that Electronic Arts would release statistics intending to demonstrate that only a negligible number of users are being adversely affected by the limits. The two games cited are Spore, which released this month, and Mass Effect, which released this year. (Let me take a brief detour to wholeheartedly endorse Demiurge's PC version of Mass Effect, having played both versions.) Presumably, the majority of those who are challenging these policies are looking a little further than four months ahead.

I as much as anyone can relate to the potential frustration of breaking out an old game no longer supported. There are certain classics I still replay on something of a bi-yearly basis, and others that never quite leave. Once you go back beyond a certain year, games don't really require anything more involved than a CD key. Unless you go back beyond an even more distant year, at which point you find yourself needing to find a word in a game manual your mom threw out almost two decades ago.

We've heard countless promises from a number of publishers to the effect of, "Don't worry! If we ever go out of business, the first thing we do will be to release a DRM removal patch!" (The same goes for Valve's Steam, a service I love dearly but whose hypothetical eventual demise causes me the slightest tinge of apprehension as a consumer.)

Really? That'll be the first thing on your mind when your assets are being liquidated? Which employee, at such a defunct or deflating corporation, is going to be tasked with such a directive?

On the note of piracy, there is also my suspicion that debacles like this simply give more fodder to the piracy apologists, a group for whom--call me a zealot--I can muster little empathy.

Taking that note further, we've got Hal Halpin of the ECA arguing that Spore has essentially created a new army of pirates. While I genuinely appreciate his forthrightness in defiantly standing up for the C in his organization's acronym, and he probably has a point in that this SecuROM implementation isn't nearly as effective as intended, it does seem like he's basically fanning the flames more than anything else. In all reality, the type of people who are even aware of the word "SecuROM" and what it implies probably didn't to be "trained," as he puts it, in how to circumvent the thing if they really wanted to. The whole situation is just a total mess.

Much like how the trappings of the current campaign season can easily have the unintended (but unevitable) effect of souring otherwise conscientious citizens on the whole political process, so too does this neverending, soul-eroding procession of DRM coverage that every day populates the gaming sites anew chip away at enthusiasm for the PC platform.

Though it's not a popular view, in my mind a lot of gamers are overreacting--look how many people buy music through iTunes, whose DRM mechanics are hardly lenient. That's not meant to be a judgment of right or wrong, it's just an observation that may illustrate the gulf between a certain gamer segment and the larger audience that seems to be continually more frightened away by non-casual PC gaming; I would submit their flight isn't based on activation limits.

But that arguable overreaction is still the result of a real, borderline-insulting game of tug-of-war that keeps being initiated by publishers. A game is released with a copy protection scheme that falls enough in the obnoxiously restrictive direction that it ignites the outrage of the forums and blogs, a tiresome PR battle wages for a couple of weeks, and the policy is loosened a bit, by which point some gamers have already walked away for good.

To PC gamers: let's stop turning every inconvenience into the plight of Sisyphus. To publishers generally, and Electronic Arts in this case: doubt not, you will always be called on your shit. To everyone: God knows the debate about Whether PC Gaming Is Dying isn't one that needs renewing, so let's not give it more fodder. And, to companies like Stardock: thanks.