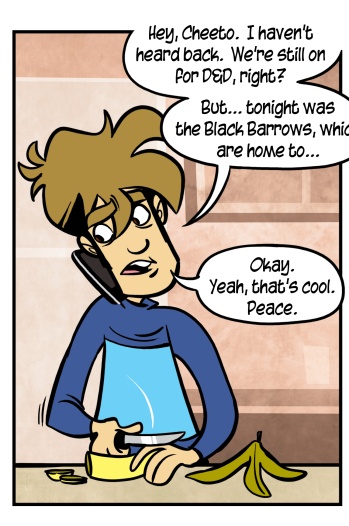 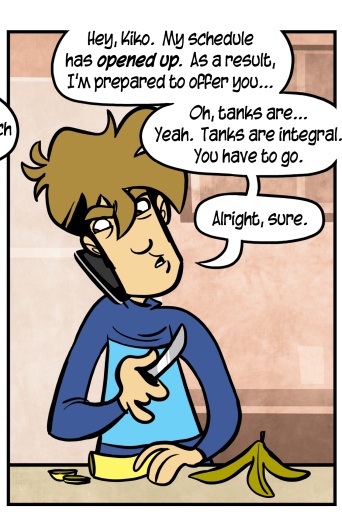 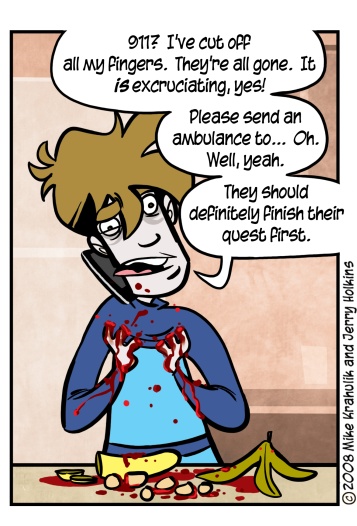 Kiko still jumps on, I think because he saw the comic, and took pity on my diminished station. Now that several days have elapsed, I'm seeing people percolating up into my Steam and Xbox friends lists, blinking rapidly, as though having emerged from a dark cave.

Gabriel suggested that if I'm ever going to jump in to Wrath, I should jump in soon, because if I wait too long it'll be like going to high school with an older brother who refuses to recognize you in the hall. But that's precisely why I won't play it: regimented, codified, other-directed "leisure" is precisely why I got out the first Goddamned time.

- The campaign in Mirror's Edge doesn't work for me. As a start, it's interspersed with animated cutscenes that look substantially worse than the actual game. I initially wondered why (in a game so obsessed with retaining a first-person perspective) they didn't put the player in the cutscenes directly, but they do that too, and it's more effective. The main problem is that I love what they've done with the art and with the style of play, but when they start hounding me with these snipers and S.W.A.T. motherfuckers it quickly becomes a game I don't want. I guess the idea is to make it more exciting, but I was already having fun. So, it's as I suggested earlier. I'm hooked on the basic mechanics, and I'm mostly interested in improving my technique against the environment. They've accomplished some very interesting things, here: you'll play this game like any other at first, especially when it plants you in some office hallway like you've seen a million other times. Then, it detonates the linearity you've come to expect from those spaces. Big ideas.

- Valkyria Chronicles is very, very simply one of the best games this year. We've been starved for a worthy tactical experience on the next-gen consoles, waiting for the install bases on this equipment to reach the point where more subtle maneuvers make sense. This game practically defines the Playstation 3 hardware for me, now: you don't get the sense that it's part of some calculated portfolio, engineered to snare elusive demographics. It's just classic from the moment you pick up the controller, with strategy gameplay that feels modern without being compromised for a general audience. I've already recommended the demo, and I'll do so again - it would be a cataclysm if this game doesn't get its due. I could write a thousand words every day for a week on either the design or the art. It's an index of our progress as a species that you can get both on the same disc.

I switched to Netflix in anticipation of the Xbox 360 update, but I've been using the basic web browser functionality just as much, if not more. In any case, however you might arrive at a Netflix Instant Queue, you'll need to populate it with something. Because you can have as many of these things as you want, and because they only take a second to add, you might check out something you wouldn't have otherwise. Here are six documentaries which I can honestly say have changed my life, and you can have any of them in a moment.