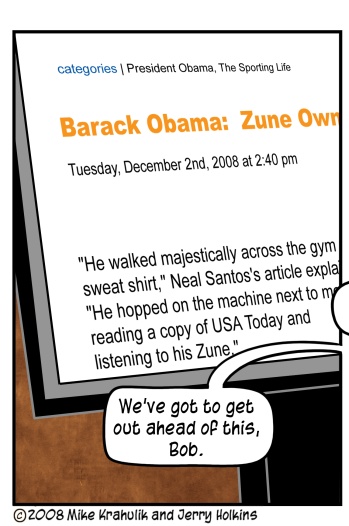 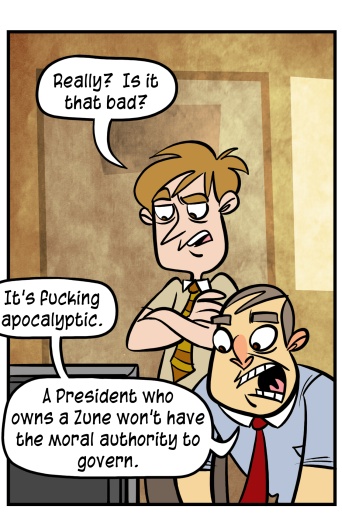 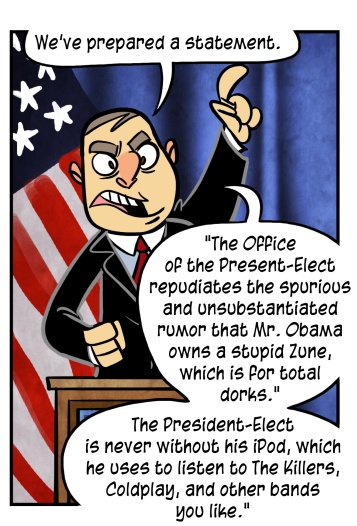 We occasionally "interpret" reality, and so today's strip might appear fanciful, but I assure you that this is actually the sort of bullshit my countrymen get up to.

- I wanted to quit Gears of War 2 purely as an act of protest, but found myself unable to do so. I've more or less figured out why I like the game, and when I travel my game catalogue in reverse the rule seems to hold. I like it because, similar to Call of Duty 4, it makes me play in a way that I'm not accustomed to. Generally, I prefer turn-based games to real-time for the same reason I prefer writing to speech. Gears (Ping-Pong, etc.) require the cultivation of a "Now Mind," a highly reactive awareness that I'm never called on to posses. My role in multiplayer shooters is typically to absorb bullets intended for my teammates. When you only have five people (or two, as it is in my preferred mode) I can't be that other person. I have to be someone else.

I had plenty of time to figure out why I liked this game while I was waiting to get into a round, which was taking fifteen minutes or more. I wrote about the recent "update" which was designed to resolve this issue, but before the patch I'd never experienced it. I have a sense, now, why people were so angry. When playing on Thursday, the amount of time we were waiting to join a game was often equal to or greater than the amount of time it takes to play one. I say usually, because there are many scenarios that result in less play per wait:

1. Being joined to a game playing a map that you don't have, resulting in a kick to the main menu.

3. The host quits after a couple rounds, ending the game.

Since there's no host migration, quitting - particularly in the current matchmaking environment - is an incredibly infuriating form of grief play. Be assured that these creatures delight in it. Your average Halo racist is a poet fucking laureate compared to these dark birds, glutted on the murderous fraternity hazing each round of Gears 2 represents. Between the glitches and the matchmaking, they have the tools to ruin the experience and it is a process they are actively engaged in. When the world's foremost software developer partners with the world's foremost engine developer, one does expect more.

in sin and error pining