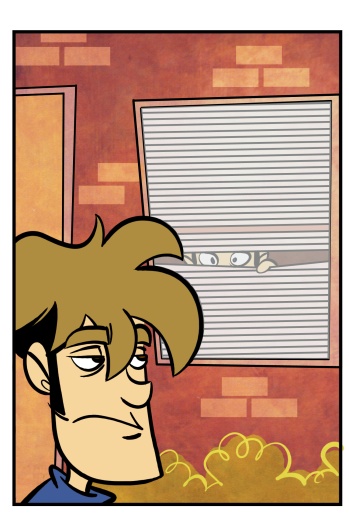 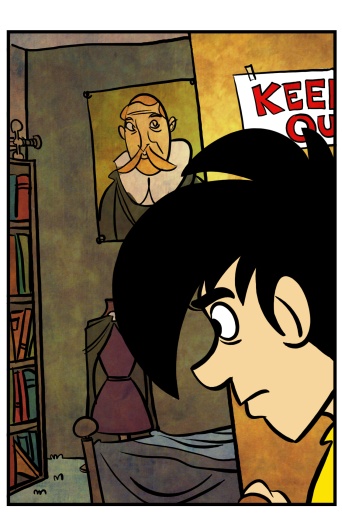 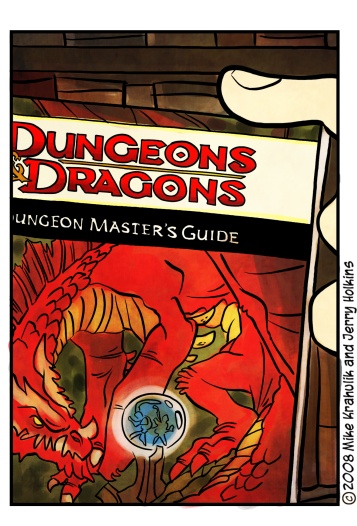 Our strip for last Monday was originally about (ahem) The Importance Of Dice Selection. On the graph, this topic is equal parts General and Specific, which nestled it in our loving crosshairs. It was perfectly reasonable subject matter, and the strip we constructed from those raw materials was piquant. Then, the night before it was meant to go up, Gabriel called me from a Barnes & Noble to ask what books he needed to run a game of Dungeons & Dragons.

I scrambled up the vertical face of this statement like a desperate bobcat, suggesting that the "Dungeon Master's Guide" was as good a place as any to start, but that optimally you'd need the "big three," which they might still sell in a single box. I tried to let my surface cool so that the bubbling rock below would not reveal the true heat of my joy. I appended an "or, you know, whatever" at the end, designed to throw him off the scent.

Whatever was planted during the first Podcast was nourished by the second, so that when it was completed he wondered aloud why we weren't playing more. I told him there was no reason that we should not play more, and that (if he was amenable) we could cease production on the strip itself and instead roleplay until our company disintegrated. Within a few days he had converted his Friday CCG group over to D&D, an event oddly presaged by an earlier storyline.

The closet behind me is filled from bottom to top with TSR era riches, classic settings and bizarre experiments on their part that chiseled my mind into whatever this is. It is still my goal to present a cool crust, but glowing seams are sometimes visible. There was never enough shared language to communicate fairly gigantic portions of my life experience, and occasionally I feel a powerful compulsion to reveal some portion of the old ways: scheming templars who serve larval gods, or the ravenous, sentient realms that dine on anguish. I try to be good about it, though. It is the marvel of that medium that his group can determine what the game means for themselves.

thumb in the thumb place