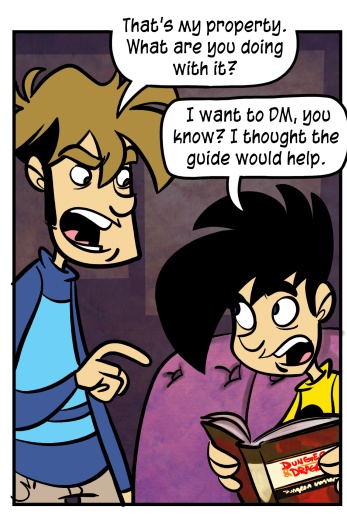 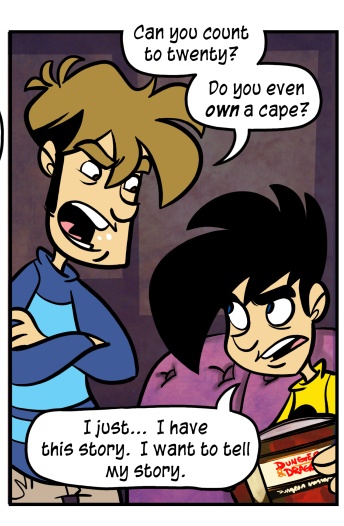 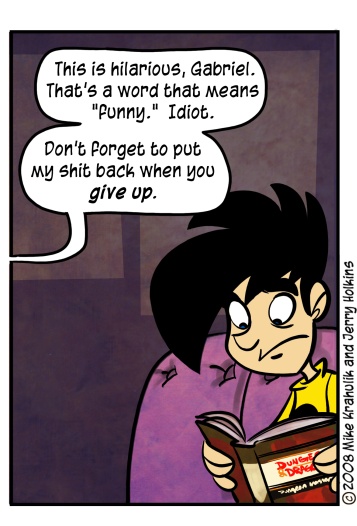 What I said about the residents of Seattle vis a vis snow was true, but shortly after I said it we received the kind of snow that one might be genuinely skeered of, especially in a town that owns no snowplows. We drove to Spokane after our flight and all others were cancelled, and things are an order of magnitude worse here. The snow is so high that there's no other interpretation: some god (or fraternity of gods) is trying to erase this wicked land.

The Dungeon Master thing continues, and Monday is its slated endpoint, unless inspiration strikes us and we are driven to continue your torment. Today's strip is not a transcription by any means, though it does trace its lineage to other morsels I tried unsuccessfully to expose him to, only to have him adopt them on his own years later.  If I can get a copy of Settlers of Catan in front of him, we may be able to play a round sometime before 2016.

I saw my DS on the bedside table when I was packing up, the Lock within it frozen in his timeless Quest. I longed to bring it, it comes with me virtually everywhere, and its flexing pouch bulges with no less than twenty excellent games. But its alien profile clearly marks it as a tool of amusement, a device with no place in a zone of reverent austerity - a scenario my iPhone may be able to penetrate. Given that this divine frost may strand us over here much longer than our original intention, I'm wishing I'd brought the DS. Then again, the DS doesn't have access to tons of free software available over cell and wireless networks. There may be wisdom in it yet.

The iPhone is currently ascendant in the enthusiast press, and while I own some very fun diversions for it, it's rare that I'm completely transported by any of the experiences. Part of it is almost certainly my idea of the device: it hasn't entered that conceptual space yet. Part of it is also that purely touch driven gameplay lacks the physicality I crave.  The DS leverages touch, but it does so with a stylus that confers a tactile element. Games that are primarily about tilting seem to fare better with me, like Monkey Ball or (awesome modern Qix-alike) Dr. Awesome. Software comes out so quickly for it that you get behind in a day. It's clearly a place that interesting people are using to do interesting things.

I am determined to find the console in this thing, and I will do so. Whenever I am not in hand-to-hand combat with a yeti.

custom made to break my bones