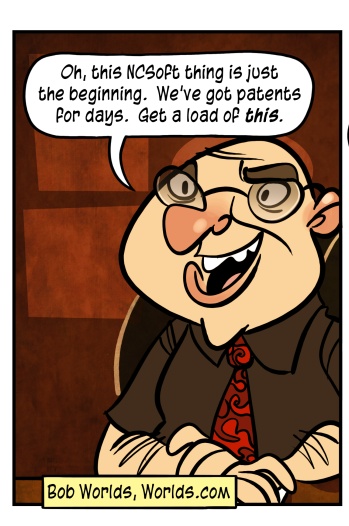 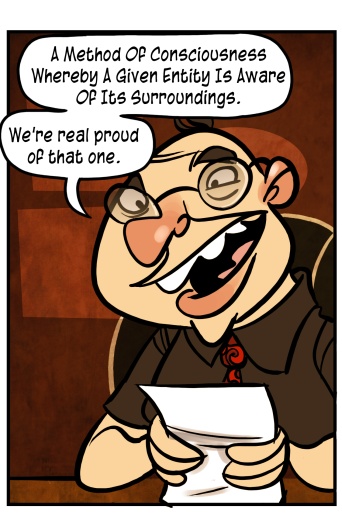 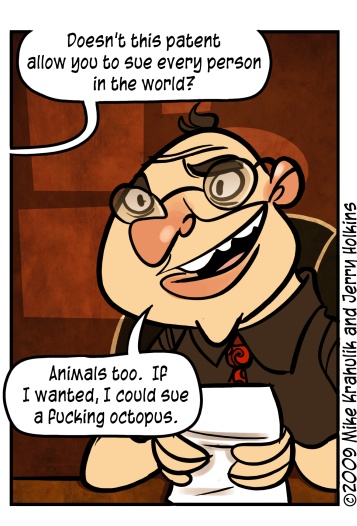 Massively (and others) dropped articles earlier this week re: one of these tech lawsuits that bloom perennially in the game industry. This time it's Worlds.com versus NCSoft, and if you think the patent in the strip is ridiculous, know that it was modeled on the real one - one which purports to define a "System and method for enabling users to interact in a virtual space." Ha!

You may be thinking to yourself, where have I heard of these people? Surely it can't be the same Worlds.com responsible for slipshod brandscapes such as AerosmithWorld, an eerie realm where that withered band rules as cruel Gods. When a company still bandies about a term like "Rich Media Graphics" with genuine enthusiasm, it should be clear that we're talking about a relic from a bygone era, like "humours" or "phlogiston." It's hard to believe that you could snare a company with such a shoddy lure, but existence is shot through with fast-running channels of such bullshit. I'm having trouble discerning how a rational society could allow productive minds to be yoked thus.

I spent a considerable amount of time last week getting up to speed with gaming on the iPhone, much as I suggested I might, and the conclusion I came to is that I don't need another Goddamned gaming system. It's more than capable of the task, and some have laid out great feasts upon its platter. I just have no appetite for it.

It may be better (that is to say, more accurate) to say that I have some appetite, pegged at roughly the snack level. I really don't want overarching campaigns or even especially sophisticated gameplay, here - when I play Rolando (which is actually as good as people have said) seeing this big book full of levels open up doesn't invigorate me, as it would in any other context: it stresses me out. What I want is something like a next-generation Snake, and I have a couple games like that. You are welcome to want more, but I already have more, on any of the six other dedicated game machines I own.  Maybe it's okay if I don't tuck in a round of tower defense when I'm buying my herbed cheese curds.

There are purely mechanical concerns as well, if we're to take its proponents at their word. The screen isn't that much bigger than a DS, but its resolution is considerably more dense, and just from an ergonomic standpoint some of the games gave me eye strain headaches. Space Deadbeef and Orions: Legend of Wizards - both games that I liked a lot - couldn't be played for long because of it. I don't want Apple to institute an elaborate certification process, I think it would injure the platform, but this sort of thing is why consoles have them.

If you were under the impression that the PSP was short on Battery Life, you should try gaming on the iPhone. The very moment you execute an application, a starving beast is set loose in the machine. You can feel the heat of its blood on your palm. This is one thing if you're talking about a gadget decoupled from the normal operation of your life - the PSP and the DS are adjuncts. When you are instead talking about a piece of equipment that - in terms of life operation - ranks near to the lungs, it's another matter entirely.

i'm here to keep you worried