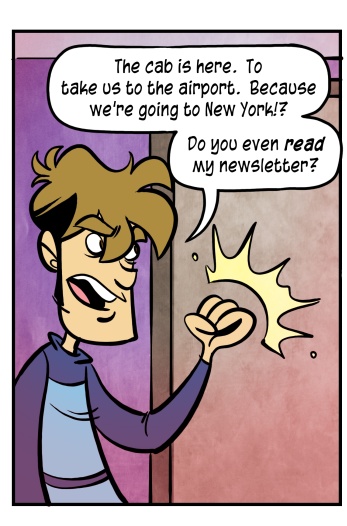 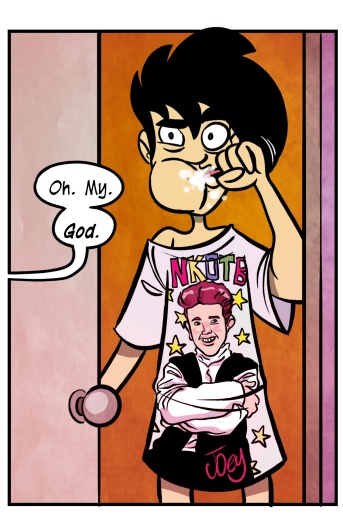 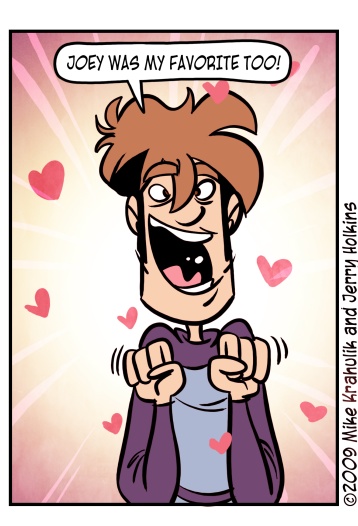 I need to warn you that the next three strips - of which this is the first - are incredibly weird. We wanted to do a couple comics about going to New York, where we are at this very moment, and the chemicals in our brains were aligned in such a way that this was the result. I'm not apologizing, just... warning.

If you're coming by the show today, and certainly this would please us, we would be honored to host you at spacious booth 1365. We will be hosting apple-bobs (no), spirited dances similar to the Tarantella (untrue), and all manner of "whimsifoolery" (not this either). The only thing we can truly offer the con-goer is unfettered access to our Scott Kurtz, which should remain on display for the duration of the show.

For my money, Tom Chick offers us a tremendous service: he is a reliable amalgamation of enthusiast and assessor. By contrast, I navigate through games (the world, everything really) on a wholly intuitive level - I know that these tools aren't capable of a holistic analysis, but that is the "sense" I use to understand systems. It's something like a sonar, which delivers a game's overall conceptual shape. It may be superficial, but at least it takes into account the entire surface...? Maybe? Tom Chick could probably have written that better.

He often strikes me as "right," though I understand that what I'm actually discerning is agreement, with its comforts and woven parallels. I receive much the same value from MaryAnn Johanson - there is substantial overlap in taste, but I'm familiar enough with their output that I know when they're allowing themselves to enjoy something that might not be, strictly speaking, good.

If he tells me that something isn't great - like Killzone 2, just as a random example - I'm likely to listen.

He's horsewhipped repeatedly in the comments that follow his post, with occasional succor from either rational men and women or depraved "xbots," but even if you write mostly positive things about the game there's still no guarantee you will escape unscathed.

This is because the score you give Killzone is the score you are assigning to the PlayStation 3, and so very much depends upon it. In a way, the score is applied to the reviewers themselves - via a kind of fanboy divination, the platform bias of the publication can be determined. A high score is not indicative of bias, rather it refers to the fact of the PlayStation's supremacy. You may think I'm belaboring the point, but I urge you to examine the thread immediately after this 8.7 review in CVG. It's like one of those magic eye pictures, where if you relax your vision you can see - right there before you - a fully three dimensional image of a stupid person.

The last time this happened was with Metal Gear Solid 4, and we wrote about it then, but it's gotten fucking worse if that's possible. Savor Adam Sessler's mailbag, with the knowledge that he scored Killzone 2 a five out of a possible five.