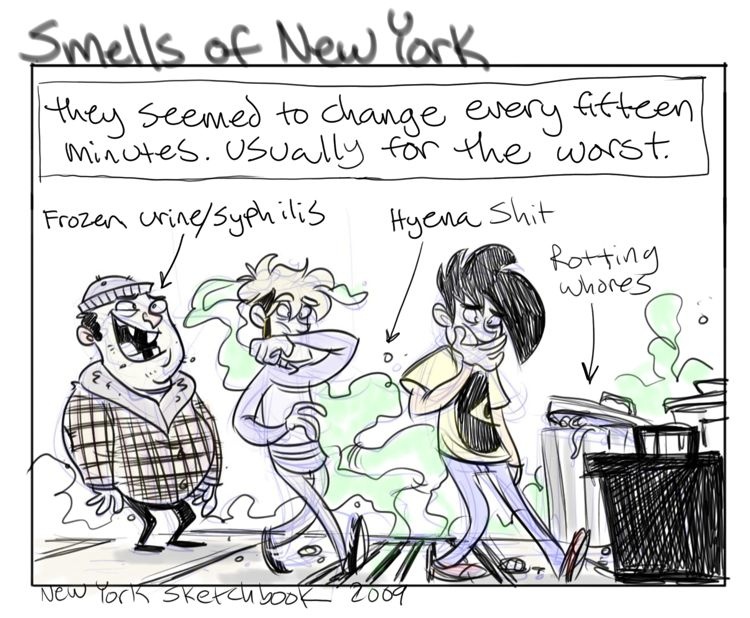 While we were in New York, I made a mental note each time my olfactory apparatus identified a disquieting new scent. Know that today's strip represents deeply abridged selection.  We made the mistake of

I suggested on Wednesday that we never get to stay anywhere long enough to get a solid reading, but I didn't need to be in Boston very long before it felt normal.  We toured the Hynes Center yesterday in an effort to imagine PAX filling that space in March of 2010, and I think it will work. We want to have PAX over on that coast, a sentiment that is almost universally shared, but we don't want to just port it.  We want it to be its own show, and being there has catalyzed that process.

This being established, it was time to come home. No more arbitrary, dehumanizing searches, no more eerily similar rooms. Optimally, I would like to see a tree that wasn't put there on purpose. I'm ready for suburbs and Wasabi Peas and blankets with cats on them, kicking back with the last son of Gallifrey. Speaking of sons, I dimly recall having one of my own.

I kept up with gaming news while we've been away, but none of it made any Goddamned sense. Blizzard hired Fargo? Square Enix wants Tomb Raider? People spent a full week gnawing on that stupid Edge review? Man, it's like I can't leave for one Goddamned week.  News-wise, the rest of my time away was essentially whatever, a surreal noise collage.  But the Edge review is such a ragged haunch of yellow journalism that it should pierce the heart of the publication.

Behind me, H.A.W.X., Halo Wars, and (most crucially) Flower are queued for download. The gavel is right where I left it, and verdicts are forthcoming.