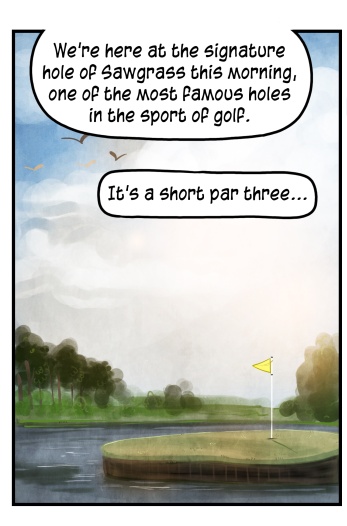 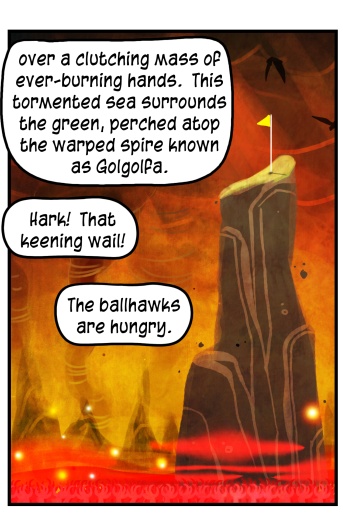 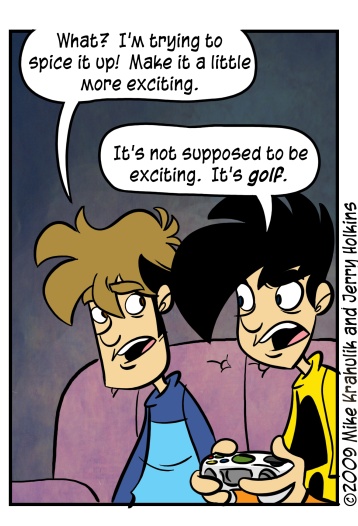 We only get a chance to play actual golf together once or twice a year, and even then I don't "play golf" so much as I ransack the snack cart and offer piquant observations. Every time we do end up on an actual course, any time we spend in transit (that is to say, most of the time) is spent embroidering an imaginary RPG entitled Golgolfa: The Ninth Portal. Golf has a substantial number of RPG hooks, and there are a couple games that take their cues from the massively multiplayer context, but Golgolfa has more to do with how a party of characters would manage a course with their complimentary skills and classes.

When a demo dropped for the new Tiger Woods, it seemed like there was finally a way to project some of those conversations into the strip, where I assume it will languish, unformed, for all eternity. Like our "collectible ping-pong card game" and my "turn-based lacrosse MMO set in a reborn Atlantis," these are beauties which cannot be contained by this curséd world.

I've never had a pronounced Team Fortress 2 phase, which shames me, because I perceive that everyone is always playing it, all the time, forever - but maybe that isn't true. I recognize that it's interesting as an intellectual exercise, and I could stare at it for hours, but I've never gotten a sense that I was having any effect on what was happening. When I read that they had introduced a new  random unlock system with the most recent patch, I immediately thought of the joke - which I didn't think would be such a bad thing.

Breeding RPG traits into other genres is a process that has gone on for some time now, so that at this late hour the notion of "experience" to denote progress and guide advancement is almost a universal. Even so, I was quite surprised to see the idea of "loot" brought to bear in Dawn of War II, both because I'd never imagined it, but also because that's an RPG trait that typically doesn't get bred into "skill-based games." Of course, that equipment isn't usable in multiplayer - it is, instead, codified into a series of "classes," another RPG convention. Anyway, Valve.

The distribution of items people are getting from the new system seems to be well and truly random - not dropped by an enemy as loot, just "received" as though by magic, and many people seem to be getting multiples of the same item.  I've read very few positive assessments of the policy.  Valve is trying to solve a bunch of problems with these random equipment "drops," such as, but not limited to:

- Countering the glut of updated classes on servers,
- Obviating the need for Achievement servers, or
- Players locking themselves into a specific class.

This last one in particular is designed to fix the trouble for a player like myself, who tends to like playing Healers, but doesn't enjoy the way the medic is put together. If I received an item for another class, I might try that class out - maybe I would find something I liked better than the one I've been taking out of adherence to ancient habit. Maybe I would find the game in there that people are always talking about.

i'll wait up in the dark