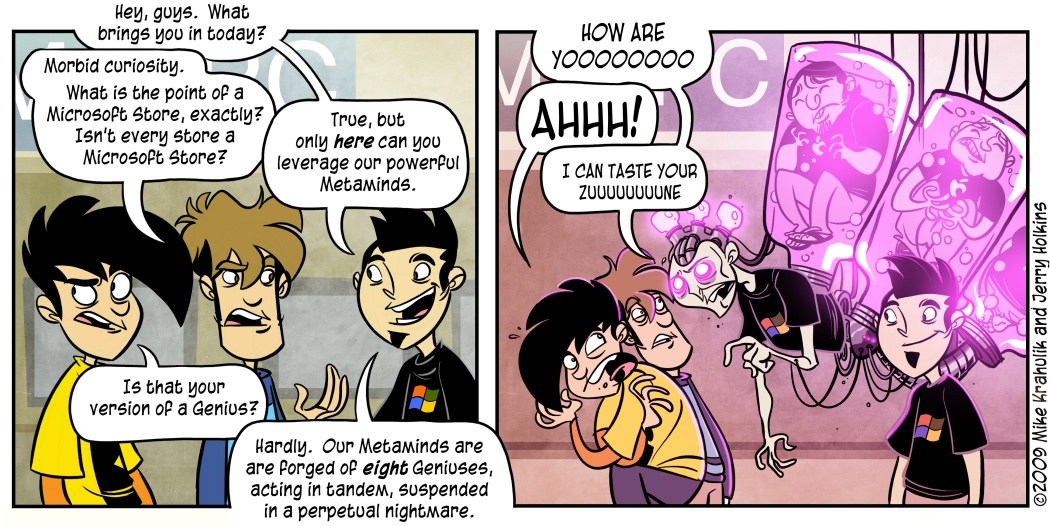 I sometimes ask friends who work at Microsoft why it is that they can't just be happy with absolute dominion over the realm of personal computing. Why they must prowl and scrape, why there is snarling, why there is lurking under bushes and (most importantly) why there is a subsequent leaping out to grip customers and then drag them with their powerful jaws.

We took the news about Microsoft Stores more or less in the way described by the first panel of today's strip. I've had the weekend (and a fever) to meditate on it, though, and I might understand it better. Underline the "might," and then italicize it.

There is a certain manner to their speech about the project, a certain tone, which couches their retail excursion as a rebuke of PC retail in general. In this, I believe we are united. Nobody likes buying PCs, but I don't think the blame for that can be laid entirely at the black altar of Best Buy.

Microsoft wants people to resonate with the "brand" - they want to be liked for being Microsoft, and harvest the benefits of that affinity - and they've determined that having dedicated stores to contextualize their product will help them to define their destiny. But their ubiquity poses a serious challenge to this: it's awful hard to like something you can't actually choose. People can enjoy using their 360 or even their Zune, because those products exist in a continuum that includes other products - you can make a decision that reflects you in some way.  On the desktop, and this is unfortunate for them, the only way to make a truly discriminating choice is to purchase a competitor's product.

I mentioned a fever earlier, and it's true: starting Thursday, I travelled a constantly growing jungle, where the snaring vines and thirsting shrubs represented my shortcomings. In a more optimal universe, this was the time I would use to embroider Automata more fully - to deliver it in a less misshapen form. I could have very comfortably written Lookouts with a fever, indeed, it might have been improved by that state. Automata takes a more metered touch, one I haven't been able to generate. Pages of Automata are also more difficult for Gabe to create, and I don't want to put him in a situation where he's painstakingly rendering something we're not in absolutely in love with.

The bottom line is that we'll start Automata just after San Diego, instead of during. I hope we can still be friends.