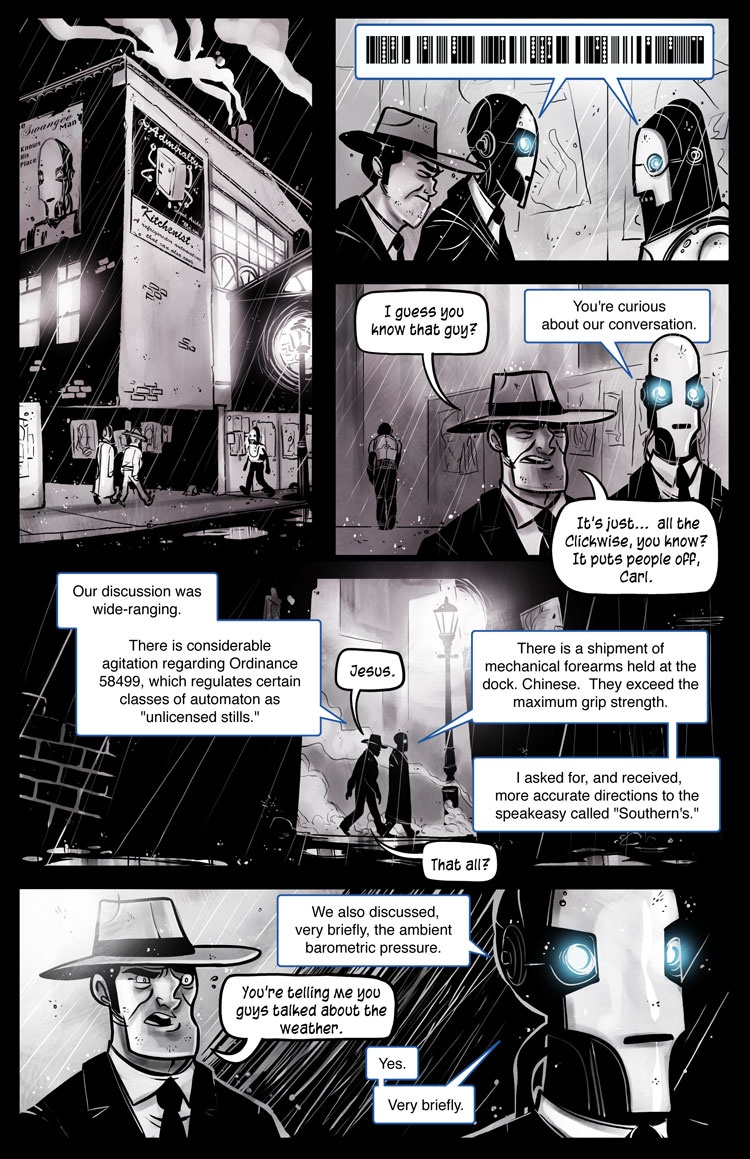 I get five pages of this thing, to assert a few more facts about the world these characters live in. That's not enough to tell a full story, not at the full resolution of this world, and I'm aware of it - so my aim is, instead, to tantalize the shit out of you, and get us in position to tell a wider story in the future.  Hopefully you are amenable.

I actually closed a Popcap game in frustration last night; to the extent one can ragequit from Bookworm Adventures 2, I have done so. It's not actually their fault. I just happen to be playing a different game than the one they designed, and when it deviates from my expectations - that is to say, when it is true to itself - fire leaps from my eyes and mouth.

You know (either because you have played it, or you have been made to endure my blow by blow accounts) that one spells words in order to inflict fatal injuries on opponents. It's the RPG version of Scrabble, and since your letter tray represents your prowess, it can be hindered in various ways by enemy attacks. Tiles can be locked for a time, unavailable for use, or their damage potential can be hindered. Those present me with challenges I consider fun, and never results in waves of warping heat rolling off my neck and back.

In fighting games, I tend to choose characters who have the tools necessary to wait out an opponent: I like to leverage counter systems and timed blocks to create the preconditions for a decisive blow. There's some variant on this for most games I play, and it probably comes as no surprise that I favor the grand gesture. So, in my Bookworm Adventures - the game which it sometimes isn't - I favor a long-term stratagem. I slowly build a word of inexorable power over the course of an entire level, delivering it like an orbital kinetic weapon, scattering the continents like some harrowing creation myth.

There is a "Tile Warp" attack that doesn't lock, or freeze, or stun, or deal damage over time, but changes letters into other letters - a different letter each round. If I am playing as though my letters are analogous to my equipment, that attack breaks the thesis. Two times, in the same level, I'd been one letter away from both Pusillanimous and Thaumaturgist. When I lost the first one I wept, with an anguish only a father can know. I kept playing, parlaying my sundered tray into the second word, of which I was also robbed. Having my letters almost completely taken up with some slowly emerging word and having to make due with the resultant famine is incredibly exciting to me. Similar to autosaving three seconds away from certain death in a shooter, it's a tiny slice of gameplay that has all the textures I like.

You can mitigate other tile effects with single use items, but warped tiles revert to their new letters, which negates the planning and feast/famine pace I enjoy. I can't stop forever - I can't leave the thing unbeaten, and I won't be defeated by it.  I just need to choke that bit of gristle down.

not that i want to