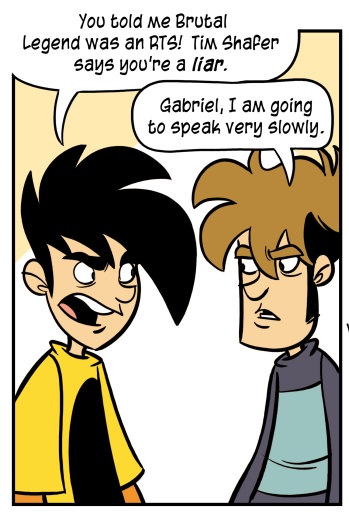 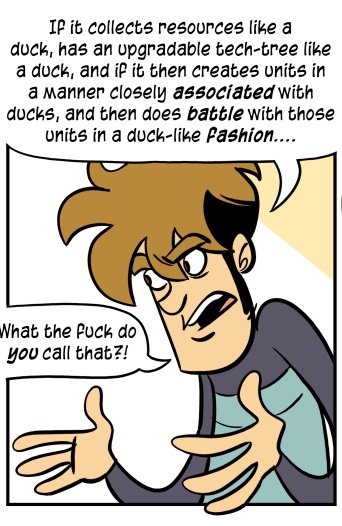 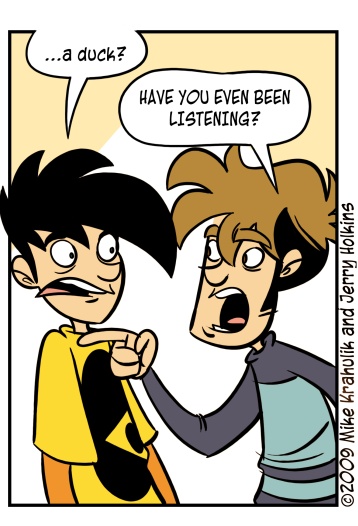 Kotaku saw fit to publish some Brutal Legend damage control care of Double Fine's Tim Shafer, or perhaps it's Tim Shafer's Double Fine - either way. It's pretty remarkable, which may be why we chose to remark on it.

The main pull quote is here:

If you try to play the stage battles in Brütal Legend as an RTS game then you will lose.

This is a statement I honestly don't understand. Much of the game (and the entirety of the multiplayer) is self-evidently an RTS, and one must engage in real-time strategy battles in order to progress though the body of the campaign. The fact that the game is also many other things, perhaps too many things simultaneously, doesn't alter the fact. And you can't really blame people for playing the game as an RTS when that's explicitly how you taught them to play it.

Elsewhere in his manifesto, he ponders a number of rhetorical RTS scenarios and then in the next sentence denigrates their importance, which makes me wonder why the game's tutorial takes such great pains to stress real-time strategy fundamentals. One might question the wisdom of constructing a game mode almost entirely out of concepts from a universally understood genre and then telling people they're wrong when they play according to those recognized structures. I'm all about recontextualizing genre tropes, but that's not what happened here. They put one genre on top of another genre and then stood back, marveling at their ingenuity.

Apparently, the optimal way to play it is to carry around a Rally Flag and fight among your units. That sounds like a great idea, indeed, it's such a great Goddamned idea that it should be the way the game automatically works.

I love rhythm games, but I don't want to play a rhythm game while I'm playing an RTS while I'm playing a third person action game. In the middle of RTS battles, some basic commands require wyldde soloz to be rocked via a timing mechanism, which serves Brutal Legend's theme but not its gameplay, and that's the problem here in general. Brutal Legend is like a spoiled child, afforded every luxury, but grown wild in in the absence of discipline.

the urge to feel your face