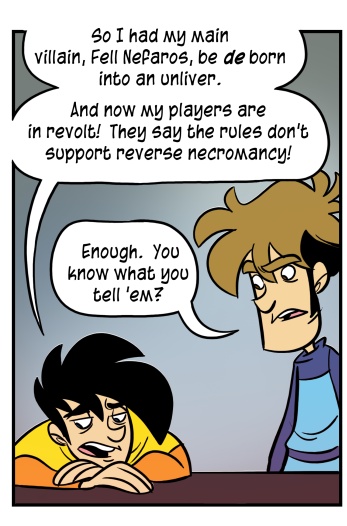 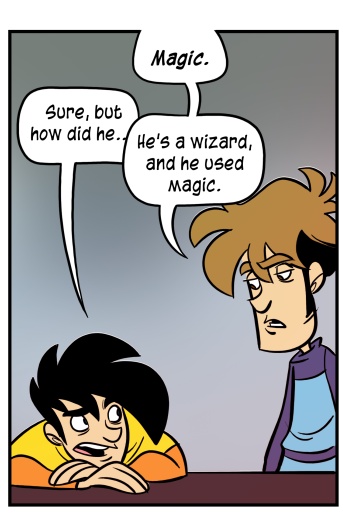 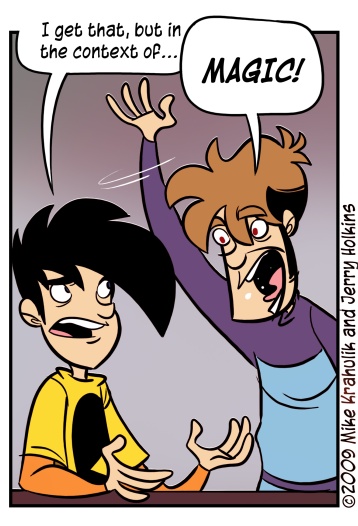 Gabriel brought to my attention a post in a dungeonmastering board he reads, which detailed the circumlocutions some people go through trying to square their plans for a vibrant scenario and the Received Wisdom of official campaign materials. It might be because we think of every event, action, sentence, or phrase as something to pervert for our use, but I was made genuinely distraught by the notion that those books - which are suggestions, at best - would conspire to dilute your joy. Those things are tools, and what's more they're your tools, which means that they serve you. Our version of the base setting is practically unrecognizable. Rule Zero is invoked constantly, of which Assertion Twelve is a corollary.

The trouble with this approach is that you begin to see the seams in other people's work. Like other atheists, I can see some of the rookie mistakes in the "world building" God has done, by which I mean Jehovah, with his cryptozoological fascinations, underutilized themes, flat protagonists, and the prevalence of barbarism - but my own work is rife with genuine concerns.  When I have my way, I gin up a world where life is a doomed accident, a planet whose crust is nothing more than a prison for an inconceivable evil, while a floating city of half-angels wages a genetic pogrom to scour mortality from their race. If anything, I've managed to create a scenario where leprosy actually sounds pretty good.

People have different opinions on what constitutes a spoiler, so if you're trying to avoid information about Dragon Age you should get out of here. If you want some world background and are a huge dork, well, let's get into it. I did a truly stupid amount of research to make the comic we did, and I never get to tell people about any of it, but its imminent release has made me free. The role of the Templars in our piece has been contentious, but their task is a good deal more complex than people know.

In the game, Lyrium Elixirs of various kinds act as your "Blue Potions," to leverage a bit of Diablo nomenclature. But Lyrium isn't just some word they throw out, some context-appropriate cipher for a gameplay necessity. Lyrium is fundamental to the way the gameworld works. Have you noticed that in the Dragon Age character builder (or Dragon Age: Journeys, for that matter) it's impossible to create a dwarven mage? This has to do with Lyrium.

An ore with mystical properties, trade between the Dwarven and Human kingdoms is practically based on it. Constant dwarven exposure to the substance - the mining, refining, and manufacture of magically augmented weapon, armor, and other goods - has given them a kind of immunity to magic. Not complete, of course - but enough to hinder their manipulation of it, even enough to offer some protection.

It is the charter of the Order of the Templars to police magic use, and containing some blood mage or recalcitrant "free wizard" is their purpose. Every Circle Mage undergoes a test called the Harrowing, which I'd rather not go into, but understand that Templars (multiple Templars) are present to kill these students at the first sign of trouble. As part of their initiation and ongoing rituals, Templars literally eat Lyrium in an effort to gain some measure of the dwarves' resistance. Addiction is the inevitable result - the lyrium isn't being consumed with magic use, and (as dwarves are rare in their ranks) they're not genetically predisposed to manage it. The addiction compounds the paranoia and obsession of a person drawn to the Order.

They're regular people, who with discipline and unswerving piety are charged with a more or less impossible task: to act as a bulwark between conscious beings and the demonic horde that roils in the Fade. They believe that any mage, at any time, could erupt in a fountain of blood and become host to a demon. They believe that people who are unwilling or unable to control their mystic connection to the Fade should have it forcibly stripped from them. They believe children who show even a glimmer of magic potential should be taken from their parents by force and handed over to the Circle. In many ways, in most ways, they are right. A Templar who stays his hand is not - strictly speaking - a Templar.

In game terms, a Templar is an unlockable specialization for Warriors. Who knows what kind of Templar you'll be - you'll meet those who question the way that the order operates. You'll also meet people who don't have a lot of affection for the Order, though I suppose (from a purely technical perspective) you already have.