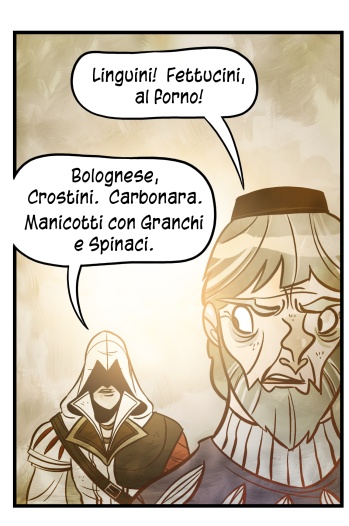 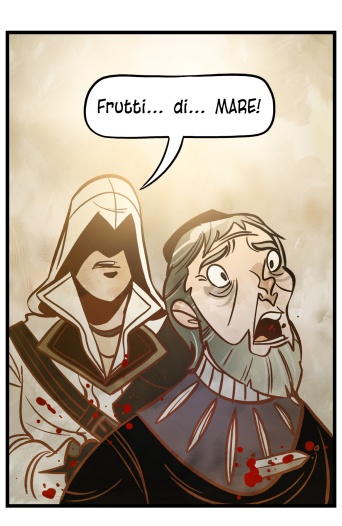 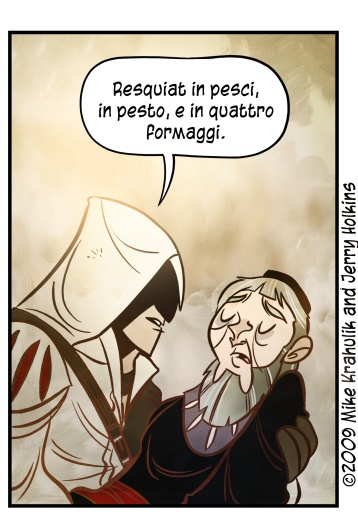 In the same way that professional skateboarders can approach Tony Hawk Ride and extract something resembling a game, people who are Italian are in a position to discern the dialogue and plot of Assassin's Creed II without resorting to deep menus or taking copious notes. This is what something like ninety percent of the game sounds like to a non-speaker: an amalgamation of intercepted food court communiques.

Because Modern Warfare 2 is "controversial," for a variety of reasons, the only manner in which serious writers may refer to it is by analyzing "that level" or by raising one's voice in solidarity for the personal computer as a platform for electronic entertainments. These things have been chewed beyond recognition; the flavor is gone. My original advice - don't buy it on the PC - still holds, even if I couldn't follow it myself. In Island of the Blue Dolphins, the young girl at the center of the book was told that she would be smothered by the four winds - killed by the universe - were she to go against the precepts of her tribe. I wondered if a similar fate would befall me, should I to download Modern Warfare 2. I was not destroyed, but it wasn't amazing either, which brings me up to a hundred and eighty dollars misspent on Activision products in a single week.

One of its biggest problems - and it may not even be a problem for the right audience - is that it is obsessed with itself. When you sell thirteen million copies, maybe there's no avoiding it. Maybe being elbow-deep in the guts of your previous effort and observing the strange shapes of the aforementioned is the only thing that keeps you from going insane.

In terms of the single player campaign, it has precisely the same problem that the Quantum of Solace did. Both experiences are sequels chronologically, and not merely sequels of form, and they assume that people were actually paying attention the first time around. It gets a little Clancy at points, if not Ian Fleming, and it's jarring if you don't chart it as the natural escalation of the ante over the entirety of both games. Even the word Sequel isn't as apt as Continuation or Conclusion.  It's not compartmentalized in the least, and should have followed immediately after the first.  It's main problem is that it took two years to complete it.

We play the multiplayer every night - on the 360, as they intended - and here the self-obsession culminated in a product of greater resolution than its predecessor, embroidering the already substantial customization options with whorls of marvelous texture.  Section 8 has a much more elaborate take on such things, elaborate being the key concept whenever one talks about Section 8, but the Airdrops have me endlessly fascinated. They're "drops," in the literal sense - that is to say loot, which only reinforces the dark lessons Infinity Ward has learned from games like World of Warcraft. Throwing a marker grenade summons a crate a few desperate seconds later, which (out of nowhere) creates a localized gameplay objective that I never get tired of.

Both Modern Warfare games have a kind of escalating win mechanism for people who are performing well, and the "Killstreaks" only get more brutal in Modern Warfare 2 with the advent of the AC-130 or the Tactical Nuke - the latter of which wins games instantly. I resented it initially, until I recognized the core of shame that spun within the anger. As a young man, infinitely worse than the promise of corporal punishment was the shameful trip to the kitchen to obtain "the spoon," a plastic mixing utensil as supple as a hickory switch which was the implement of my torment. Certainly, being bombarded with 105 millimeter shells is bad. But the knowledge that your armed your enemy thus, with your sloth and your ineptitude, unfolds in the heart like a poison.