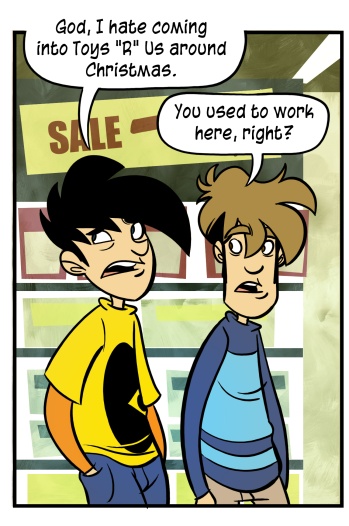 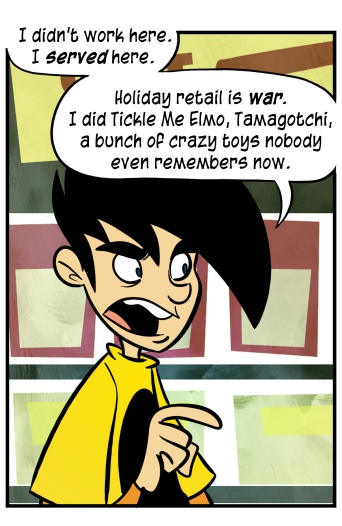 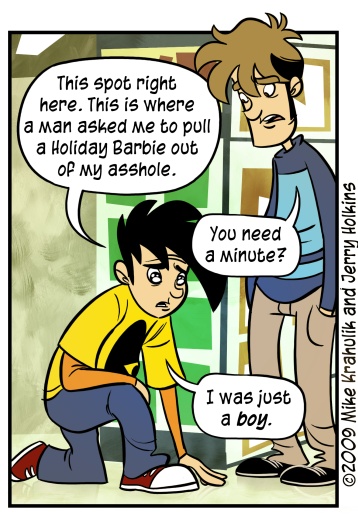 Gabriel still gets the shivers when entering the Holiday Retail environment, as shellshocked memories begin to leach from his brain. He is gripped by a kind of solidarity with the drudges who stock the infinite shelves, in whose ears splendid carols are warped into the crushed and tenebrous mulch of a funeral march.

There's two strips total on this theme, one for today and another for Friday. It's something we could do for weeks if necessary, so numerous are the tales of his abuse at the hands of the consumer, but this should be sufficient for now. There was a time (specifically, a time in 1999) when we considered starting a second strip solely to catalogue them.  Life, as is so often the case, had other plans.

You've probably created an account at Gamespot at some point in the last decade, and like a seed planted in season it is time to begin the harvest. They've got codes for the Bayonetta Demo (Specifically the "360 Demo" in the "North American Territory") and merely by signing in with your ancient account you can obtain one. If you have an interest in the game - and you should have an interest in the game, an all-consuming interest that darkens the corners of your vision, this is something you need to do immediately.  I've probably played the entire thing through six or seven times, well after I understood it but desirous of greater understanding. It is baubled with terrible beauties, vicious maneuvers, and a wicked arsenal, but what becomes clear very quickly is that - while the game is (ahem) demonstrative in its presentation of an eldritch martial discipline - the game is actually "about" avoiding attacks. That is the subtle cadence behind every ridiculous video you have seen: that mastery, in this context, is represented by the moment before the assault.

I did my best to direct you toward Armageddon Empires in ages past, as was my moral duty, and it is this same virtuous drive that compels me to direct you to Solium Infernum. Set to launch later today, it attempts to simulate a war between Hellish princes utilizing hexagons(!!!). Fidgit's Tom Chick has been offering up choice cuts in his famous game journals, amplifying my lust, which is probably a statistic in this game. I haven't had a chance to play it yet, at least, outside of my own incredibly detailed fantasies, but a demo will arrive alongside the product this evening.