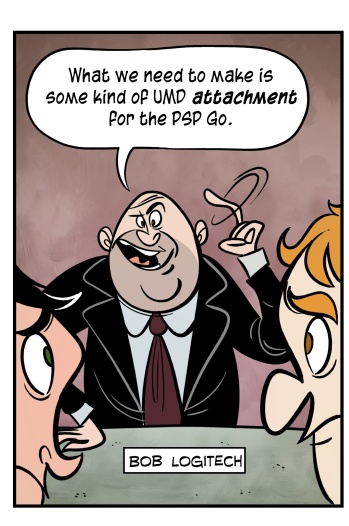 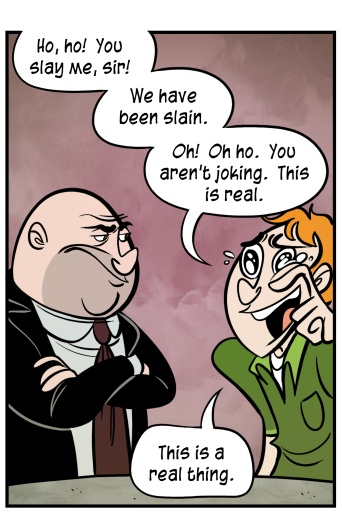 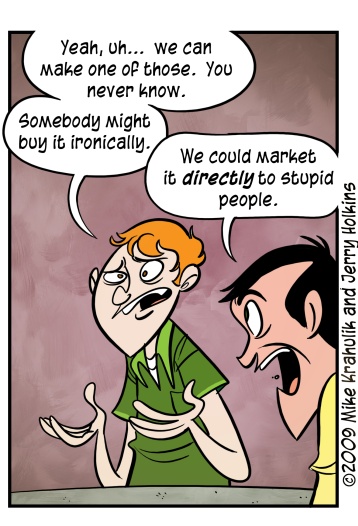 Logitech's rumored UMD peripheral for the PSP Go is incredibly hilarious. I'm not even saying that's it's true. I'm saying that its apparent necessity is a sad statement that has apparently been lost altogether in the high rate-of-fire environment we rely on for information.

The story of the UMD format follows an almost Shakespearean arc, grim with portent, but even I could never have foreseen a future where they would strip it out. For a historical allegory, the PSP was the Trojan Horse, and its vampiric, ill-starred optical drive was its savage payload. Penetrating our lucrative demographic with this medium was its purpose. Absent its violent contents, all you've got is a really big horse.

How they convinced retailers to sell this thing is still beyond me, but if I may be permitted to indulge in conspiracy for a moment, Little Big Planet PSP may convey some measure of it. With a digital launch that trailed the physical one by a full week - an auspicious span that I am finding increasingly difficult to ignore - even the most rational mind might suspect devilry. I'm very curious to see to what extent the biggest releases (from first party, or otherwise) follow this route.

A copy of Might & Magic: Clash of Heroes arrived in the mail yesterday - we were not expecting it, and we had never heard of it, and I set it on the side of my desk with the intention of placing a cup on it.

The cup scenario may have held firm, in fact, if I had not idly flipped it over to assess it, in the manner of a gourmand surveying a greasy Denny's brochure. The tiny shots on the back implied something strange - I saw "tactics," and "turn-based," but more than that I saw armies arrayed against one another on the top and bottom screens in oddly shaped legions almost Galagan in nature.  And there, near the copyright information at the bottom, was the symbol that changed everything: three azure rodents. The mark of Capybara Games, purveyors of puzzle amusements that I have come to trust.

Critter Crunch on the PS3 is amazing, and will shake you from your slumber if you've seen a screen or two and think you're in staid Match 3 territory. The mechanical aesthetic may be best described by Matryoshka dolls: you must make complete sets of matching pieces, like other games, but the size of the pieces is also important. Might & Magic: Clash of Heroes takes their clever matching puzzler and somehow transforms it into a honest-to-God tactical role-playing game, with no intervening loss of elegance. I took it from room to room yesterday in the office - like a wandering monk in possession of a mysterious relic, the agent of its gentle profundity.

i would do it all again