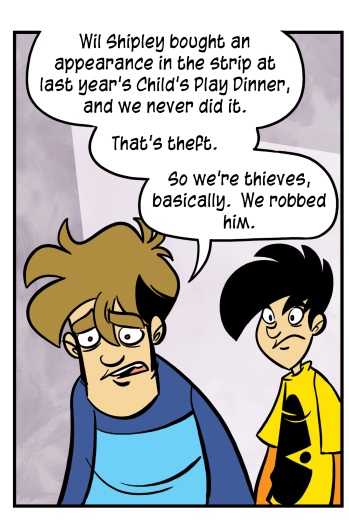 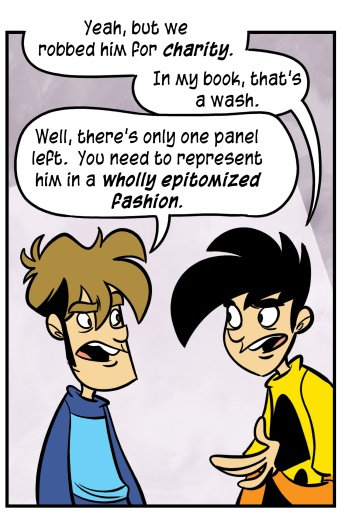 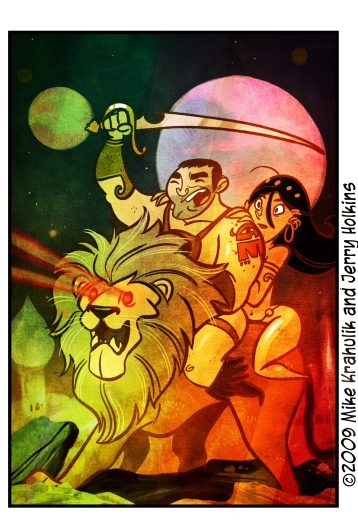 I don't wear nice clothing often enough to remember exactly how it is applied to the body. Every time the Child's Play Dinner rolls around - and this year marks the sixth such occasion - I approach the garment bag like I'm inspecting a crime scene, afraid to disturb it, trying instead to interpret it. As happens with such frequency, I try to imagine what a normal person would do in my situation.

What I have come up with is this: no normal person would ever be in my situation.

Today's strip is the one purchased at last year's event by Wil Shipley, which is to say this Wil Shipley, that is to say Williford Gallavanter Horace Shipplemount the Third. It took us a very long time to get around to it, and we'll be more judicious with this year's winner - but hopefully this third panel does something to dilute the shame of it. Who knows, maybe it will amplify the shame. I guess we'll see.

For those of you who are curious about numbers, I have them: in addition to being a diversion par excellence, the evening netted $191,656. Immediately after we left the stage, we received another seven hundred and fifty. The two top bidders to play in Gabriel's D&D game agreed that they would both pay, and therefore both play, which hauled in an additional four thousand dollars. For the year, this brings us beyond 1.2 million dollars - already astounding - but it puts us within striking distance of last year's tally, which rests at $1,434,377. You know now the enormity of our task; I beg you to be the equal of it.

I never fully understood how Battlefield: Bad Company 2 became the receptacle for so much good will when public opinion on Modern Warfare 2 went south. It has Dedicated Servers, certainly, and this is a consideration, but the two games are philosophically distinct - they're so diverse that they're barely comparable, and one could never be reasonably substituted for the other outside the dilapidated machinery of forum logic.

Each game leverages a first person perspective, this is true, and one interacts with their opponents via firearms, yes, but as these metaphors are investigated "first person shooter" is becoming increasingly useless as a descriptor. Battlefield has always been experienced through a thin layer of cellophane - somewhat abstract, loose, never especially visceral in its battlefeel. The tradeoff is scale: what you get in exchange for those ambiguities is a broad palette of player "expression," by which I mean murder. To compare, most Modern Warfare maps could exist in your back pocket, conceptually speaking. But Gabe isn't willing to trade the almost arcade immediacy of our current game, even if it meant more options.  What he wants is fun, and he already has that; the decision making process is over.

Kiko asked Gabe what he thought of the Bad Company 2 Beta, and was told that the game was Bad, and when pressed for further comment was told that it was Bad because it was Yucky. I suggested Baddlefield: Bad Dumbpany as a potential moniker, thinking I had discerned the humor needs of his demographic, but I was wrong. He doesn't want the game discussed around him at all. Desert Combat wasn't relevant, Battlefield 2 never pierced him, and the first Bad Company didn't exist. Bad Company 2 is no heir to a storied lineage, as it is for me. It's just a game that he has no use for, a sprawling extrapolation of something he didn't especially want to begin with.

There is a tutorial for Cryptic Comet's Solium Infernum that has been making the rounds, and it is marvelous in the way that the Fall From Heaven II manual is, and the Arcanum manual was: as lozenges of raw, self-contained, context-independent entertainment. That it teaches you the proper turn sequence in Hell is appreciated, Hellish protocols are bewildering for the uninitiated, but it stands on its own as a barbed parcel of metafiction.  I note with some pleasure that the URL refers to itself as "Solium-Infernum-Tutorial-1," that's Tutorial-1, with its intimations of further delights.

my mission (after apple school) is to win the rodeo