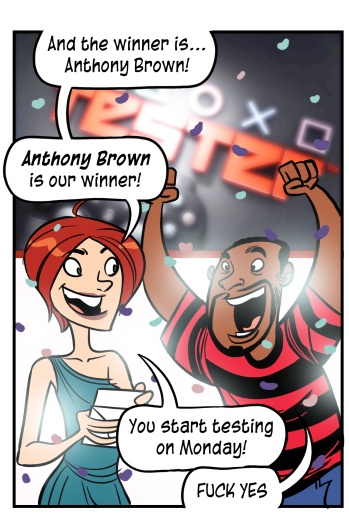 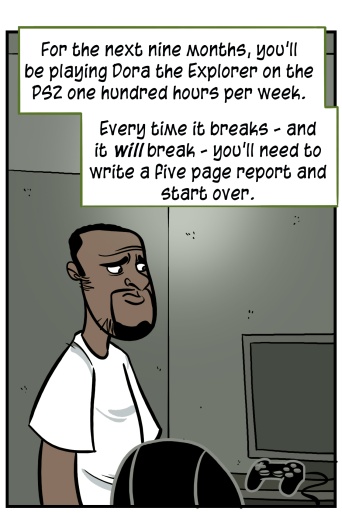 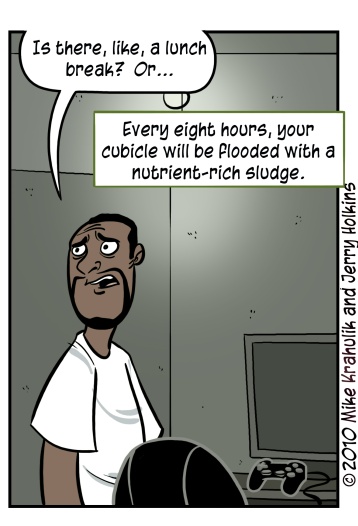 You may know that Sony is putting together a reality show where human beings caper for our amusement. That's regular stuff. But the prize they're competing for - a testing position - is, to be clear, not the sort of thing one competes for.

We know a lot of testers.  Testing is an umbrella term in the gaming industry, and isn't entirely sufficient as a descriptor. My friend Clinton did "testing" at Microsoft on the original Xbox, and this testing involved him opening and closing the system's drive tray all day. He just got back from Iraq, but if I were to ask him what the most unrelenting and psyche abrading job he ever held was, I know he'd have to pause a moment before answering.

To the extent that all the people who play games even want the same job, it sure as shit ain't tester. It's brutal slog after brutal slog, crunch after crunch after crunch, and when you land a game you're actually interested in it arrives in a state which is often deeply unlike that of a videogame.  Some testers are able climb the corpses of their fellow man and move north in the hierarchy.  It does happen.  But not every day.

I've got Mass Effect 2 completely pre-loaded now, and it struggles to be free, fettered by trunks of cunning cryptographic chain. I played the first game on the 360, but as soon as I sampled the far superior PC iteration (by go-to development spigot Demiurge) enthusiasm for the no hard-disc having, high-definition-in-air-quotes version of the inevitable sequel began to smoke and fry. I was seared though, because I didn't especially want to play through the entire game again just to... well, what I just said. I can play that board in Pac-Man Championship Edition over and over, maybe forever, but as soon as characters start speaking to each other I'm smashing the space bar to skip every line.  And that's me we're talking about.  Bioware games supposedly have a lot of replayability, but I'd never be able to access it without a traumatic head injury and the concomitant memory loss.

I decided to ask Chris Priestly, Bioware Community Coordinator Person, exactly to what extent I was fucked on this. I've read quite a bit on how you can bring over your old character, which is obviously a much appreciated nod to a bygone RPG era, but I haven't read much about my own situation. It's a little more broad than you'd think, because there are many reasons why you might not have access to a file from two fucking years ago. I was shocked to hear his reply: that they had fully accounted for this. When creating a new character, you can go down a list of key decisions and set them manually.

I exhaled, then, a stale and depleted breath which I had apparently been holding for more than a year.