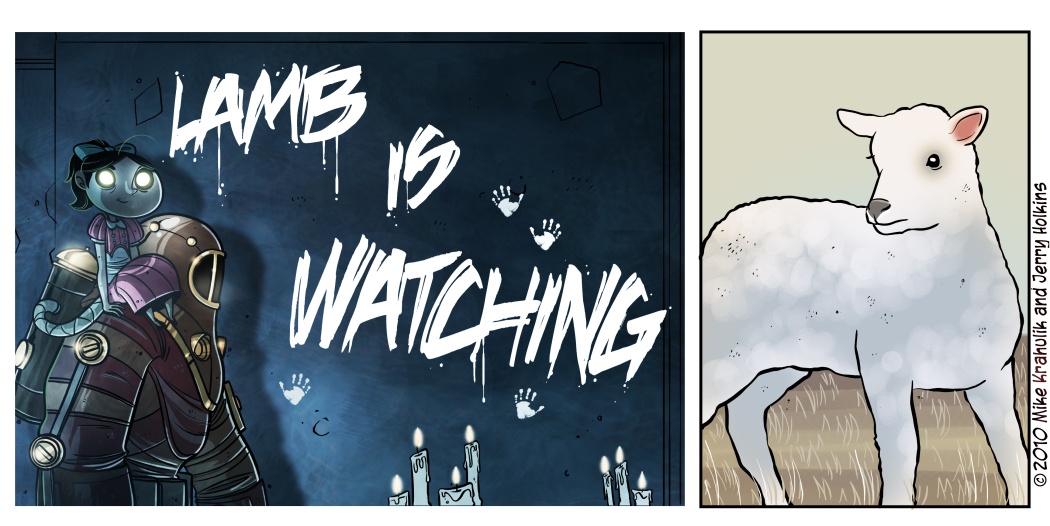 Gabe and I are beginning our descent into Rapture more or less simultaneously, so there's plenty to discuss. I'm still feeling my way around, seeking out the game's throughline. Gabriel loves it whenever there isn't shooting, and there is really quite a lot of shooting, which complicates things. What we both agree on is that Bioshock - and Rapture itself - are much, much broader subjects than the "gonzo shooters" which have thus far defined its chronology.

Right from the install, though, Bioshock 2 deals in subversive, incredibly sophisticated humor. A glance at my task manager reveals that, while running, the game is protected by three forms of Digital Rights Management simultaneously. One is expected, two is an affront; three must surely be considered avant-garde.

Kotakite malefactor Stephen Totilo recently put together an article called The Daddening of Video Games, and I wish I'd written it first, because it's something I think about constantly. I'm satisfied, though, simply having his back.

Silent Hill 2 tells an amazing story, but there's a subtext there - a secret band of data - that burns hot and bright for husbands. When I'd completed the game, at something like four o'clock in the morning, I stared at the screen absolutely numb for a very long time. Games, virtually as a rule, don't discuss a topic like your wife's wasting death in anything approaching this detail.  Yeah, the game gets weird, but it gets weird only to the extent that James Sunderland's guilt about a real event warps reality. Many of the twisted creatures he encounters are surprisingly literal (almost to the point of banality) once you begin dwelling on them.

The core idea there - the health of a spouse - is a completely normal topic, investigated ad nauseam outside the confines of electronic games.  I might have resented its use there before I actually had a wife, scorned it as transparent and manipulative.  There's quite a lot about mainstream culture that I found fundamentally incoherent before I was married, another threshold was crossed when the nurse handed me a son, and when my daughter arrived I was granted vision into yet another formerly unseen spectrum. Previously, I had something like a schematic of the required emotions: we're perpetually being groomed by forces ambient and direct toward some social ideal.  I knew what I was meant to feel, and could produce an iconic representation of that response. But it's a construct - rational, as opposed to intuitive. I can try to explain it in terms of scale. It's the difference between a highly compressed .jpeg of a stop sign and the heat death of the universe.

I don't place much stock in "official blogs," as their very nature involves strictures that virtually guarantee nothing interesting can happen there. Also, it can be difficult to discern who exactly is "speaking" to you. That's what makes David Cage's Heavy Rain blog over at IGN so incredible. This shit didn't come from the marketing department, I'll tell you that much. This guy is a fucking wreck - he's barely making it through the day. The clutch of the creative process, as experienced by Cage, is indistinguishable from a mental illness. Heavy Rain is a symptom of his condition, and he is expelling it from his mind piece by piece in an effort to save his own life.

There's simply no question that the man is a father. I've never seen anything like the gameplay early on in this video, let alone this terrifying thing. Brenna couldn't finish watching the second one, and this is a woman who rolls her eyes at virtually the entire medium. This was something she could not disregard, as she can so often, because it dares to traffic in such universal themes.

a town that all of us burned