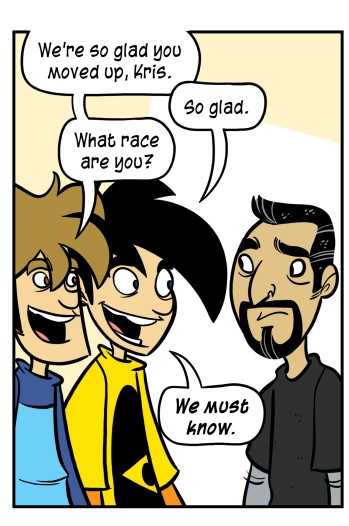 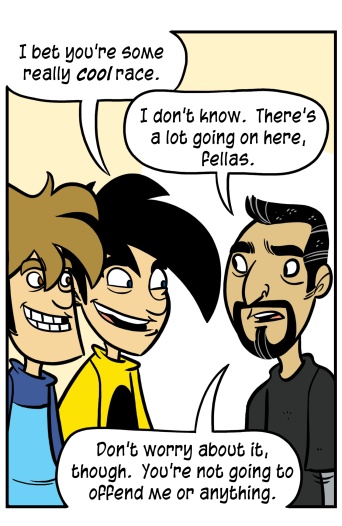 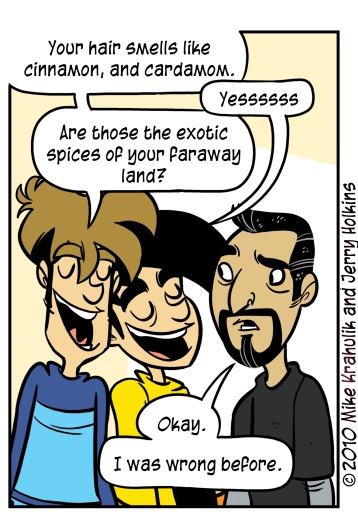 I can't say enough nice things about Kris Straub. I know this because I once attempted to do so, to reach that theorized limit, and after almost fourteen solid hours of compliments I think we both felt a little weird about the entire process. He had begun texting openly at that point, and I had been reduced to effusion about a mutinous stitch in his garment which was jutting - "capriciously," I suggested - just above his left sleeve.

He has decided to live near to us now, blessedly near, and even works out of the office some days. Without telling us. Which I guess makes sense in the context of the earlier paragraph, but still.

I'm not sure what this means for me as his most ardent cultist, or what effect (if any) it will have on the newsletter.  This is like if you were a high priest of Apollo, but then you just started to see Apollo all the time, not just during Daphnephoria or one of his other festivals. At first it'd be all "Hail Lord Apollo, Son Of Zeus" every time, eventually losing the Zeus part, then the Hail would be worn off through constant use, and ultimately even Apollo would seem too formal, resulting in A-dog, which shames everyone involved.

Maybe this is actually a healthy thing. Maybe proximity will humanize him somewhat. As it stands, I think of him as humanity's prince. Its noble, genetically nebulous prince.

I make it a point to visit Lost Garden frequently, far more frequently than it is updated, because every now and then I find something like this. Or, more recently, this: a hunk of indiedev apotheosis coupled with word of a then incubating game called Steambirds. You might note that the link to Steambirds - and there is it again! - is an appropriately formed HTML link, and the current version of Steambirds lies in wait there to rob you of your Monday morning. I'm told this represents only the first wobbly steps of the concept, and if turn-based aerial dogfights represent Square One, then he has my attention.

I've also been trying to keep abreast of Xbox Live Indie Games, as I suggested.  The venue is sometimes constructed XbLIG, and I'm okay with that. It's a weird realm, perhaps even double weird, chimerically shifting in texture. I caught a trailer for an Xblig called "Soulcaster" that took me a while to parse, but it's out already, so discerning the truth of it is a straightforward matter.  It's lovely.  It plays for all the world like a combination of Bomberman and Tower Defense, and I hadn't considered it previously, but them's two things what might benefit from juxtoposin'.

a disease of the mind