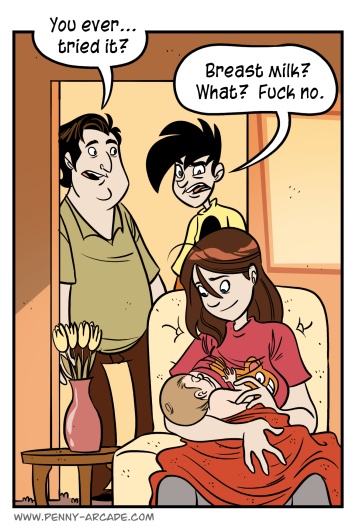 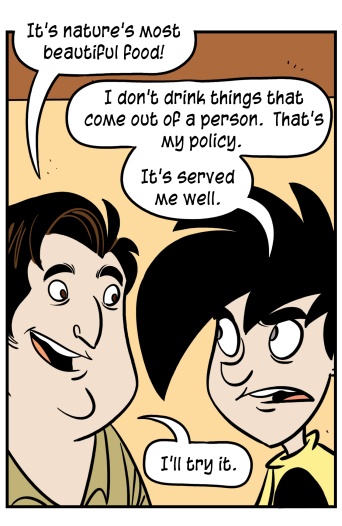 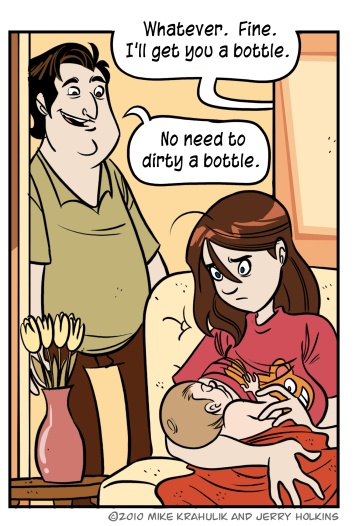 Scott lives up here now, and not just lives up here but works up here, and when I say "up here" I don't mean the Greater Seattle Metro Area but specifically right down the hall. If he gets hungry, and I am hungry at the same time, we can go eat lunch. Maybe that seems like some normal shit, but the stats prior to this state of affairs placed us at about one lunch per decade.

Shit be trending up.

If we have a pressing question about Kris Straub's penis, we can get this question answered right away. I don't know how he came to have such encyclopedic knowledge of this region, or why we would ask Scott when Kris himself is in exactly the same room. Maybe we thought it would be weird for him. Brass tacks, I'm just saying this is the kind of scenario that we can avail ourselves of now. And we have.

Something you may not know about Scott Kurtz is that he and Kara are drinking buddies, and that he has some mysterious quasi-magical ability to make her laugh, which makes Gabriel purse his lips and pretend to receive an important call from a "cool person."  Steve's new proximity has allowed incidents of this nature to occur with greater regularity.  I'm going to leave it at that.  If fr some reason Gabriel wants to discuss the particulars of Kara's...  particulars, he is welcome to it.

They signed us up to do "Game With Fame" again night before last, this time on Halo: Reach, and because we are not dumb we agreed to play Halo for two hours - something we would likely have done anyway. We have a high opinion of Reach, and as we haven't discussed it yet, now is as good a time as any to explain why.

I'm not especially good at Halo, which I believe we've discussed. I try to be a good teammate, but I tend to get locked into these cycles of behavior during a round that get iterated with no real benefit - slipping into a mental gear of pure reaction that sees me piling up spawn after spawn to no useful purpose. I don't know if that's a global phenomenon, but that is what happens to me.  Armor Abilities, as presented in Reach, interrupt that process and let me play again.

Armor Abilities - part of a loadout you choose at spawn - allow players to choose the kind of game they want to play. And while they're doing that, which is already a lot, they let you adjust in ways great and small the way your opponents must play. These are changing all the time, and there are even modes where your team must earn them before they're available to you. Everyone seems to have a favorite, well in advance of the launch, which tells me Bungie isn't far off the mark. Gabriel is partial to the jetpack, because he believes (correctly) that whenever you can nudge a game closer to Tribes you should do so. I'm a huge fan of Armor Lock, the invincibility/EMP machine. Invincibility is always a plus, but early on in the beta people were really freaked out by this feature. Nowadays, people don't manifest that primal fear.

What it does do - what it excels at doing - is making people look. Look, damn you!  Over here! It drives them nuts when they can't have you, there in your hermetic shell, it feels like a hostile act.  Maybe they didn't care before, but they care now. It's like the Tanking dynamic that exists in online role-playing games: it draws focus, and in a team mode (particularly if an associate happens to be invisible) you can often pick up these rubberneckers for points. Essentially, it makes people behave irrationally, often against their own interests.  Who wouldn't want such sorceries at the press of a button?

as your brains fell out through your teeth