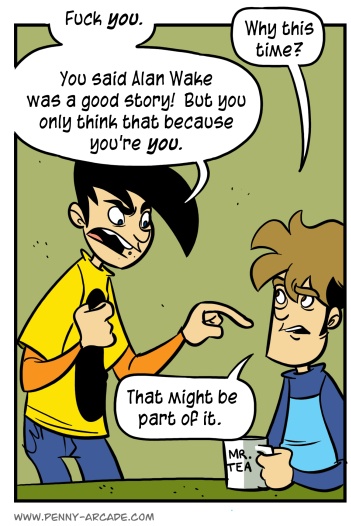 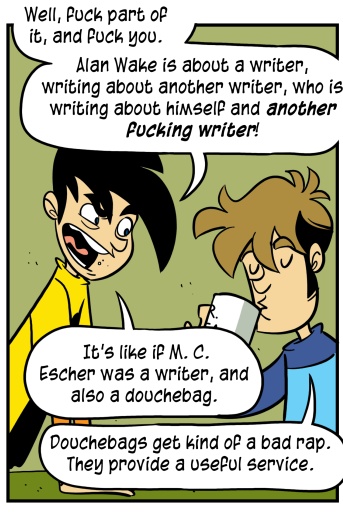 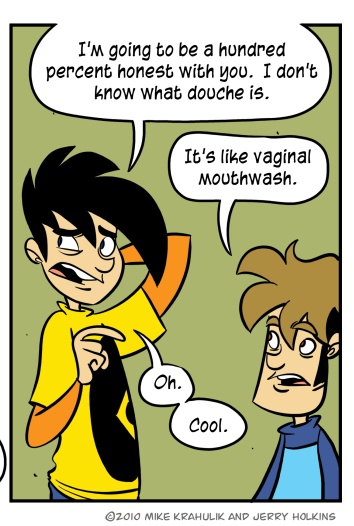 I tend to like a little wiggle room in my narratives.

I don't like to know absolutely everything, and often what I come up with on my own I like better than what is offered, so for me the best kinds of stories feature defined regions of white space. There isn't much I like more than the feeling of "collaborating" with the creator of a work I enjoy, and the margins of the defined account are where I tend to engage them. I like all the elements in a kind of superposition, hung in some whirling system, and this whirling creates tremendous energy.  I understand that this is a localized phenomenon, though. These missing or intentionally obfuscated regions don't create the same pleasure in every organism.

I spend an inordinate amount of time trying to conceptualize Natal, or whatever the fuck they're going to call it, because I don't know what it could possibly be for.

I can still recall being at E3 one year, in the back room, my greasy mitts on the rump of a DS Fat, trying to figure out what Japanese mushroom inspired this contraption - and more importantly, could it be imported without legal jeopardy. That's a long-ass sentence, but I wanted to keep all the ideas. In any event, I was wrong to think that the device lacked conceptual power simply because I was - myself - unable to define it. I seek this kind of thing out, now.

When I was part of an anarchosyndicalist music assault collective, our practice space was situated above a used instrument shop. Because we were in late, and the drummer was an employee, we could play anything we wanted to. I will admit that I often chose the Theremin. As in, like, one of these. They are incredibly difficult to "play," and I've put that verb in quotes because you don't actually touch anything. It gins up spooky sounds based on the position of your hands and fingers in two zones near the device. As a user interface, the void is profoundly unsettling.

It has me thinking about the idea of a Magic Feather. Even if the Wii or the PlayStation 3 could track the body, without the use of intermediary devices, would they do so?  Do those devices offer the user a focus for the experience, independent of their mechanical necessity?

I feel like I more or less understand Move. That may not be true, of course, and it's the kind of thing I love being wrong about. But they've done everything they can to define their offering, here in the quiet stretch their competition has afforded them, and (outside of some fascinating exercises in raw tech prowess) they've heaped up a lot of incredibly safe ideas.  By contrast, Natal doesn't seem especially safe.  It seems fucking insane.  It's like something a meth addict would come up with as they were dying in a bathtub.

I can't stop thinking about it.

something dangerous and true