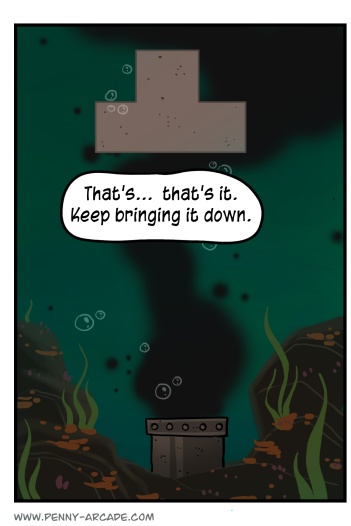 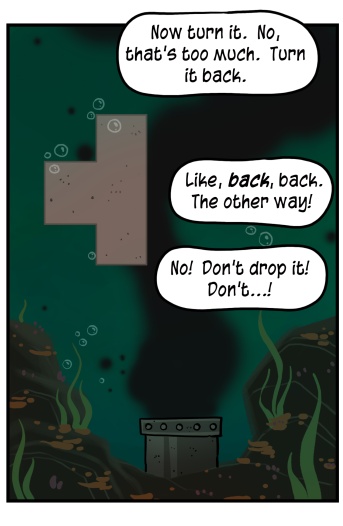 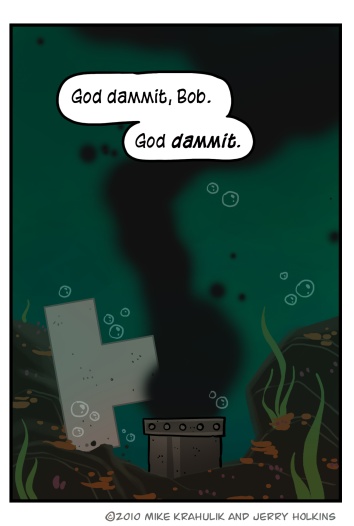 I'm fairly certain that playing videogames has given me unrealistic expectations when it comes to solving real problems. Independent of the scenario - a race of ravenous sentient robots, a wife lost in the folds of a parenthetical metanarrative, and so on - I can be expected to deliver a satisfactory resolution in twenty hours or less. More than satisfactory, in fact. I will recalibrate your entire concept of success as it relates to human endeavor.

I might leave a crack somewhere in the proceedings, something to allow for a sequel, sure - Navajo rugs, and so forth. But this oil thing exists at a point beyond my ability to usefully file it in my mind. I have a naive, quasi-religious faith in the capacity of people to resolve problems, borne of three decades plowed into interactive power fantasies and utopian science fiction. It's left me more or less paralyzed by the world-as-it-is.

My video card gave out a few days ago, a 9800 GX2 that had served me well during its brief time on this Earth, right up until the point where it refused to render anything higher than 640x480. I'm hard on technology, so my equipment is always finding ways to leave my service. I owned the first PS3 that I'd ever even heard of failing, and it was already broken inside the retail box, which must be some kind of personal record. My reputation precedes me, apparently.

Even so, it's something very different when a computer goes awry. Our dialectic is entirely different from that of a single purpose device. There is so much surface area (psychologically speaking) between the enthusiast user and the machine that the loss of it feels... well, it feels like this. When an Xbox decides that it doesn't want to do the one Goddamn thing I want it for, I box it up and ship it out. This is the closing of a single circuit, encapsulated in an act that feels like punishment: I'm literally banishing the machine from my home. Get the fuck out of here. Come back when you lose the sassmouth.

When the computer - a device I have named - turns on a person, there's nothing else to call it but betrayal. This is the betrayal of the father by the son.