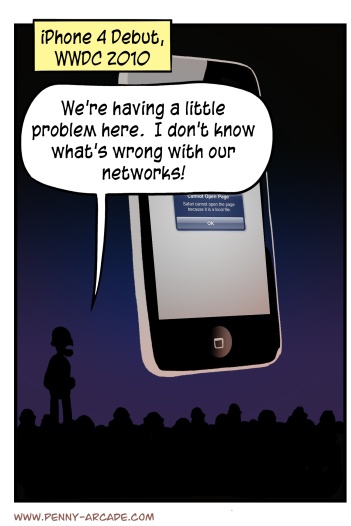 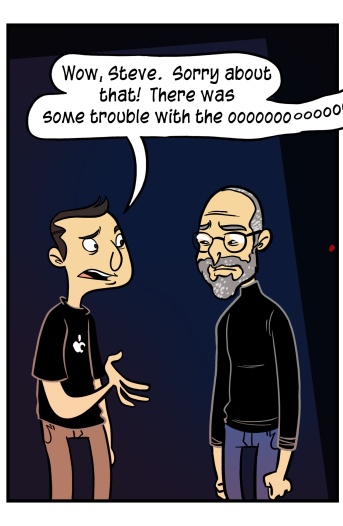 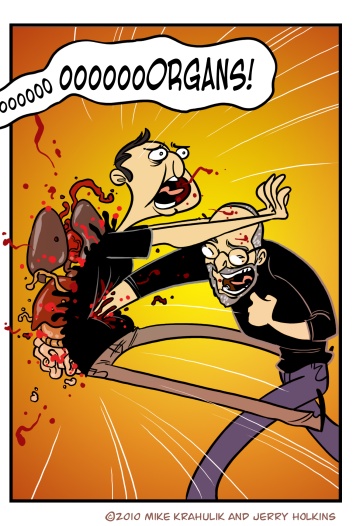 We were trying to imagine what it looks like backstage when there is a Technology Problem - capital T, capital P - during an iPhone announcement. We don't think it matters who you are, or if you are responsible for the problem, if you just now got there, or even if you work for Apple. It is core to our assertion that in the unassuming frame of Steve Jobs there roils a dark power, and that there are moments when this malevolent force must find release.

a Nook,
a Laptop,
an iPad,
and an iPhone

all at the same time. The first time I became aware of it, I said to myself, "This is ri-Goddamned-diculous. What sequence of events lead to my place of submission before this electronic Hydra?!" It's happened three more times since then, and the sequence of events isn't that strange - I'm simply using each device for what it's best at, in parallel. They are my harem, in essence: I like each of them for a different reason. If I had to boil it down, though, I could - and easily. I can accomplish virtually any electronic task that needs accomplishing with the iPhone, and do it anywhere, a statement of unassailable fact that the new iPhone imbues with even greater truth.

There might come a day where I don't feel like a twat using an iPad in a public place, but that day isn't here yet.  It's a little too ostentatious, like toting around a scepter.  I don't like it.  The only thing it can do that my iPhone can't is be more expensive.

Gabriel has an iPhone 3Gs, a phone with more internal beef than my own 3G, which will grant it at least partial access to the features that come along with the fourth version of the iPhone OS.  He doesn't feel like a new iPhone is something he needs.  I need only the barest excuse to purchase the new iPhone, or any new phone really, but why not, because the one I have now occasionally pierces the person I'm speaking to with bursts of horrifying sound. Described alternately as "the sound of hating" or the "mindless bellow of a Hunger Star," it is not a sound people are eager to hear.

in the gut of her tarasque