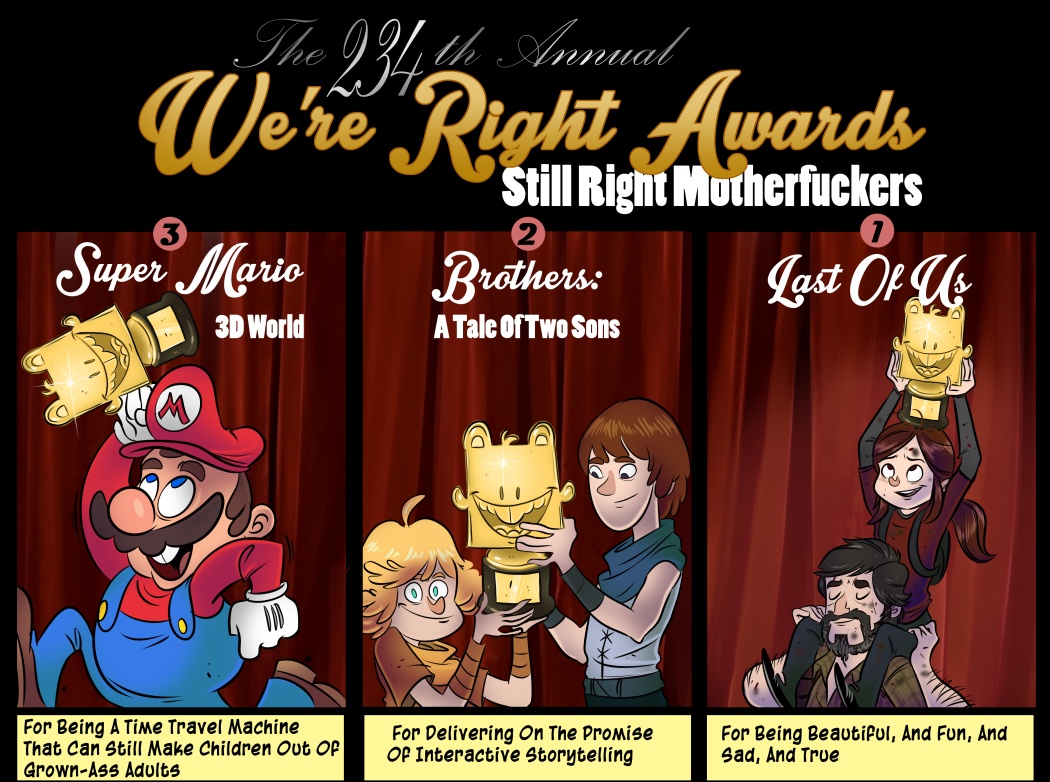 - We described the game as a Masterclass in the podcast for We're Right, a holistic philosophy of design whose purpose is to instruct others. By all accounts, "Mariobilia" should be utterly exhausted as a conceptual space. In the hands of another, it would be ash-grey muck by now. A dead ball of interstellar slime in search of some heretofore unknown "second death." Not here. Occasionally, you may even feel the urge to set the controller down on the couch, nod, and digest before plunging back in. I especially enjoyed Quarter To Three's series of playthrough articles, and I present them here in the hope that they may be of use.

- Brothers: A Tale of Two Sons isn't fucking around, even when it looks like it's fucking around. Some games are short, and some games are dense. Right? And Brothers is "short" because it is always moving. It earns rest, on more than one occasion, but doesn't take it. It has plenty of laudable characteristics, I could laud the shit out of them, but I think a lot of crews would have had this idea and made it cooperative. And I would have lauded that. I have a weakness for the form. And yet, it wouldn't have been right. You feel the fraternal relationship of Brothers because you, as the player are the fraternal relationship. What this means is… you know what, I'm not going to say what it means. If you haven't played it, you're a fundamentally immoral person. Generally speaking, though, we call this level of foresight coupled with execution "genius."

- So you can see here with the last two - or first two, we argued about the nomenclature - the ironic veneer has burned up in reentry. I really don't know what else to tell you about The Last Of Us that didn't already churn in the din that accompanied it, other than to say that I think Naughty Dog has struck a vein here that warrants investigation. Not necessarily in the franchise way, though I have no doubt in my mind that there exists within the mind of that company a host of worthy stories to tell there. What I mean is that it doesn't really offer ironic protection to the player. This is not an adolescent game, and I mean that in all three ways. Its themes are not adolescent themes. It is not the product of an adolescent mind, nor is it the product of an adolescent industry. And it's not even done; it's not even done.