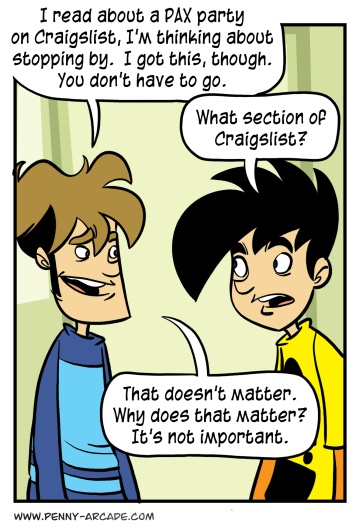 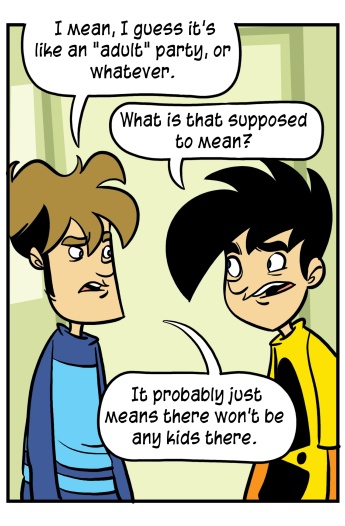 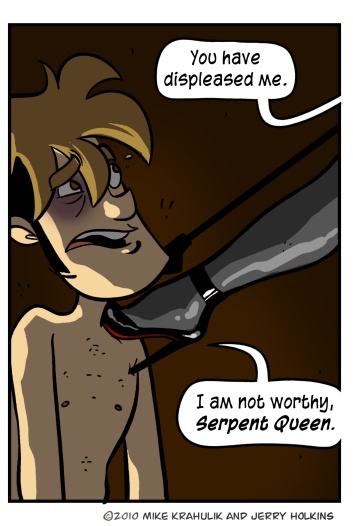 We saw an incredible Craigslist ad when we were getting ready to write the strip, an ad which quickly became the strip we were trying to make. Another ad went up shortly thereafter, in response. Also good!

This sort of thing happens in the margins of any con; the first of those, anyway. The second is more likely to be a PAX-specific phenomenon. In the periphery of any social gathering, tiny conventions are created and dissolved continuously. When my anonymity was better preserved, I could wander the halls of the attached hotels and bear witness to the full Venn Diagram of geeks as a people. I want to emphasize that I'm talking about the whole diagram, here.

I mean the entire diagram.

It turns out that used games are a tremendously controversial issue.  Part of the reason response to the comic and post has been so massive is that (aside from our inflammatory presentation) this conversation has been a long time coming. The thing for the commentariat to do about this issue typically is to carve out as populist a stance as possible, to cluck and tut tut about it so as to ingratiate themselves to you as much as possible, and then follow up by posting a picture of a belt buckle. That strikes me as a bit precious.

Because this is the Internet, every argument was spun in a centrifuge instantly and reduced down into two wholly enraged, radically incompatible contingents, as opposed to the natural gradient which human beings actually occupy.

People who buy used games are not pirates, by definition. Used games (used everything, really) are and will continue to be a legal and protected form of commerce. Other industries have done what they can to co-opt, destroy, or harvest those markets, but their existence is settled law.  What I have said is that the end result of that purchase from a developer perspective must be indistinguishable.  Isn't it?  That is the question I couldn't answer. I still can't answer it.  And because I couldn't, I had to change the way I invested my leisure dollar.

People want to talk about used cars, or libraries, or any other thing really, but I'm not talking about the universe in general - I'm talking about the tiny part of it I have any control over.  That bit up there is the part I can't resolve: the moral dimension contained within the purchase. Yes, I'm giving somebody money when I buy used. Is that sufficient? What is the end result, and what systems am I sustaining by doing so?

I'd rather not think about things like this, believe me.  I'd rather be Mr. Perpetual Good Times, but I'm not built that way.  On the whole, I'd say thinking has been a tremendous inconvenience.