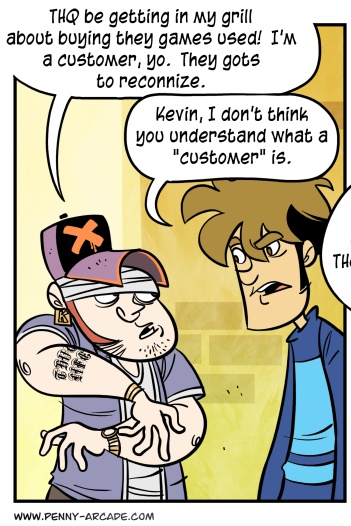 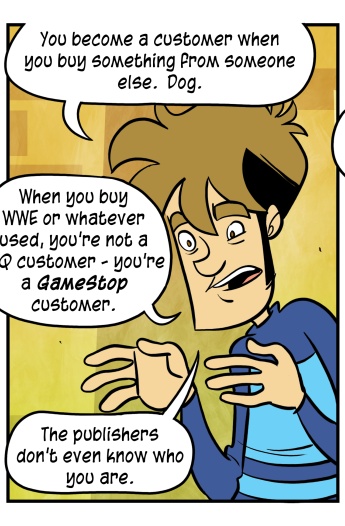 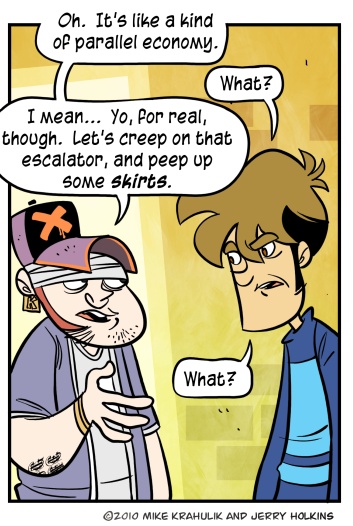 The idea that THQ is somehow "disrespecting customers" with this kind of rhetoric misunderstands the situation as completely as it is possible to do so. In a literal way, when you purchase a game used, you are not a customer of theirs. If I am purchasing games in order to reward their creators, and to ensure that more of these ingenious contraptions are produced, I honestly can't figure out how buying a used game was any better than piracy. From the perspective of a developer, they are almost certainly synonymous.

It's exceedingly rare that I purchase a game from Gamestop these days.  I got tired of being harangued for trying to buy products there, or being told that they didn't have a product when they did, or going across the street to Best Buy or Target or Fred Meyer and finding fifty copies of the game I was trying to buy heaped up like some heathen altar to commerce.  There's more, besides.  At some point in the last few years, I became incredibly uncomfortable with the used games market.

I don't think Online Codes that gate access to multiplayer are a particularly good idea, just watching the kinds of threads it generates - but that's exactly what Xbox Live does, for every game on the platform.  Sony's considering codes as well, but they're getting it coming and going: they've committed themselves to a dedicated server infrastructure for first party titles, and multiplayer is "free," so a used copy of a Resistance or an Uncharted 2 is a worst case scenario. I prefer an approach along the lines of the Flashback Pack for the second Gears of War - something fun and extra, that feels like a reward.  More treat than trick.

I traded in games for a long time, there's probably comics somewhere in the archive about it - you can imagine how quickly my cohort and I consume these things. It was sort of like Free Money, and we should have understood from the outset that no such thing exists. You meet one person who creates games for a living, just one, and it becomes very difficult to maintain this virtuous fiction.