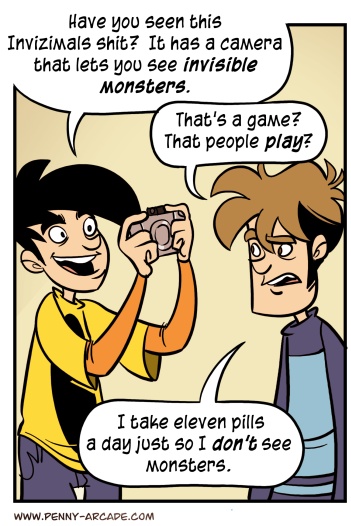 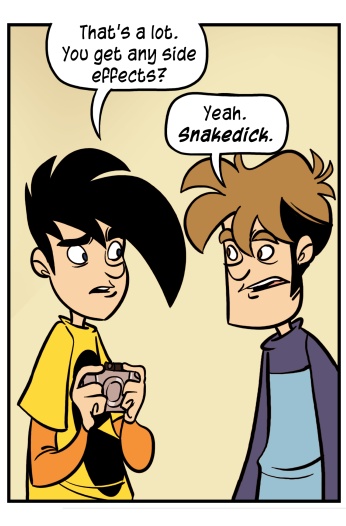 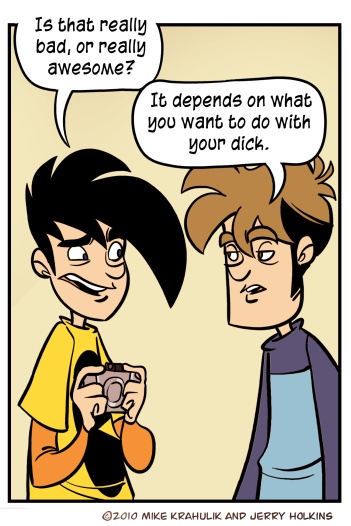 Having sons means (among other things) that we can buy things "for" those sons that we might not purchase for ourselves. I think Invizimals probably fits somewhere into that scheme.

It's an Augmented Reality game, like EyePet let's say, but it's distinctly unlike EyePet in that is actually Pokemon. This is pretty crafty shit, and if I were the right age (which I'd say was 5-8) it would be ridiculously, almost dangerously compelling. In Pokemon, you make a dude and he runs around and collects dangerous animals. In Invizimals, you literally are the person who catches monsters, invisible ones, with the help of a camera device affixed to your PSP. You have to look around your house for them and find them, and when you do, you have to lay down a "trap card" to seize them. One of the beasts (a "Porcupain") ended up being on Robert's back, so I had to hold the card there for awhile while we attempted to capture it with a minigame. He was surprisingly tolerant of this activity, possibly because he knew the vital importance of our work.

I never knew entirely what to say about Elemental. The reviews and commentary that surrounded the game had a sufficiently apocalyptic air that I didn't feel compelled to issue a broad condemnation, but my own experiences with it were so raw and strange that I had a hard time reconciling it with what I think of as a strong legacy of publishing and development. GalCiv and Sins of a Solar Empire have been such reliable sources of pleasure that I couldn't square it with what was seeing on my screen. Demigod began its life raw as well, which felt like an aberration for the company at the time; now, it seems like a portent.

I install every update as it comes down the pike, and I always pull up the changelog to see what rough edge has been filed off this time, but until the prophesied 1.1 update I'm not in any rush to run the executable. When I do, I want to have the very best opportunity to love what I see there. I can wait.

They tend to make good on their promises though, eventually, packing on extra features and polish after release - and that's my hope here. In an interesting piece of judo, they brought on Fall From Heaven's Derek Paxton to take the rudder of the entire project. I discovered Fall from Heaven when I was away from home, far from the black tower of Axalan, and just reading the manual and steeping in its ideas stretched my skull. Bringing on a savvy Project Manager after release is... I don't entirely know what that is. Interesting, let's say.

I wonder to what extent "Elemental" as a "brand" has been scorched by this exercise, if what I read online represents anything like consensus.  As I said before, Stardock customers have been trained to expect fairly substantial upgrades by this point as a normal consequence of their purchase. I think the best thing at this juncture is to make "Elemental II" just such an upgrade, a realization of the product, and pray that this larval state passes into memory.

but never i gave